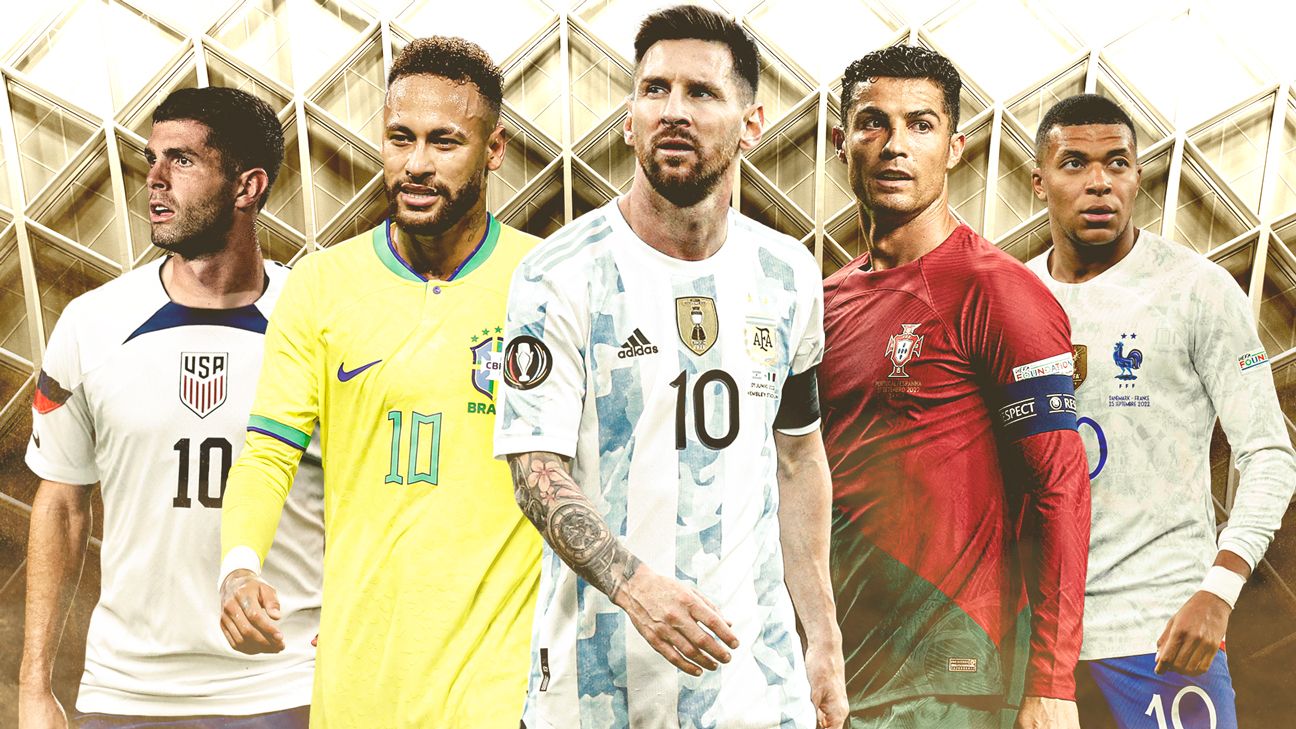 The 2022 World Cup in Qatar is missing some big teams (Italy, Egypt, Nigeria, Colombia) and some big players (Mohamed Salah, Erling Haaland, Victor Osimhen) but that’s what makes this tournament the best in sports. Brazil are looking to win their first World Cup since 2002, while England, Argentina and Germany are hoping to dethrone defending champions France.

Can Belgium or Spain make a splash? Will Lionel Messi or Cristiano Ronaldo shine? And where will the United States and Mexico end up?

ESPN is previewing each of the World Cup’s 32 teams ahead of the tournament. Here’s what you need to know about the sides set to do battle, split into the groups they will be in. 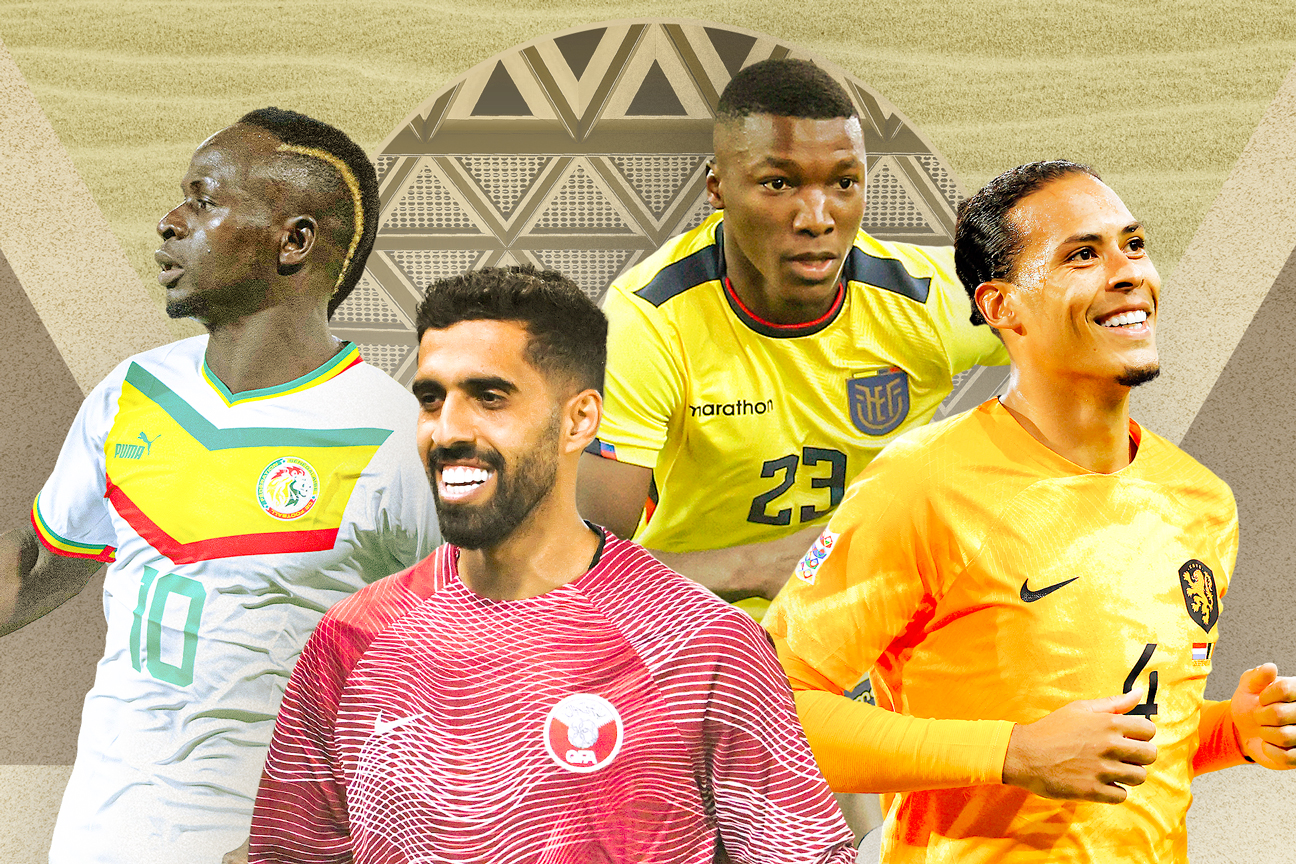 Qatar: “Qatar open the tournament against Ecuador in front of 60,000 fans at the Al Bayt Stadium on Nov. 20 and, buoyed by the occasion and energy, a win for the hosts would not be a shock result. If Qatar are able to take a point against Senegal and Netherlands, the home side may end up progressing to the knockouts but it’s unlikely they’ll get much further than that.” — Hafsa Adil

Netherlands: “Netherlands are favourites in Group A and should get through to the knockout stage, but then they’ll face opponents from Group B in the round of 16. In their current form, the team should be able to make it to the semifinals, but all the pieces must come together for that to happen.” — Bob Ligthart and Marciano Vink

Ecuador: “The expectation is that Ecuador can at least match their best ever World Cup, Germany 2006, when they got out of their group before losing narrowly to England. They are certainly capable of it, and perhaps even a little more, but the group is tough.” — Tim Vickery

Senegal: “A favourable group and the momentum from a maiden AFCON triumph have fuelled the belief in Senegal that this team are destined to emulate the achievements of the 2002 generation, honouring 20 years since that great side reached the quarterfinals. They can certainly reach the knockouts.” — Ed Dove 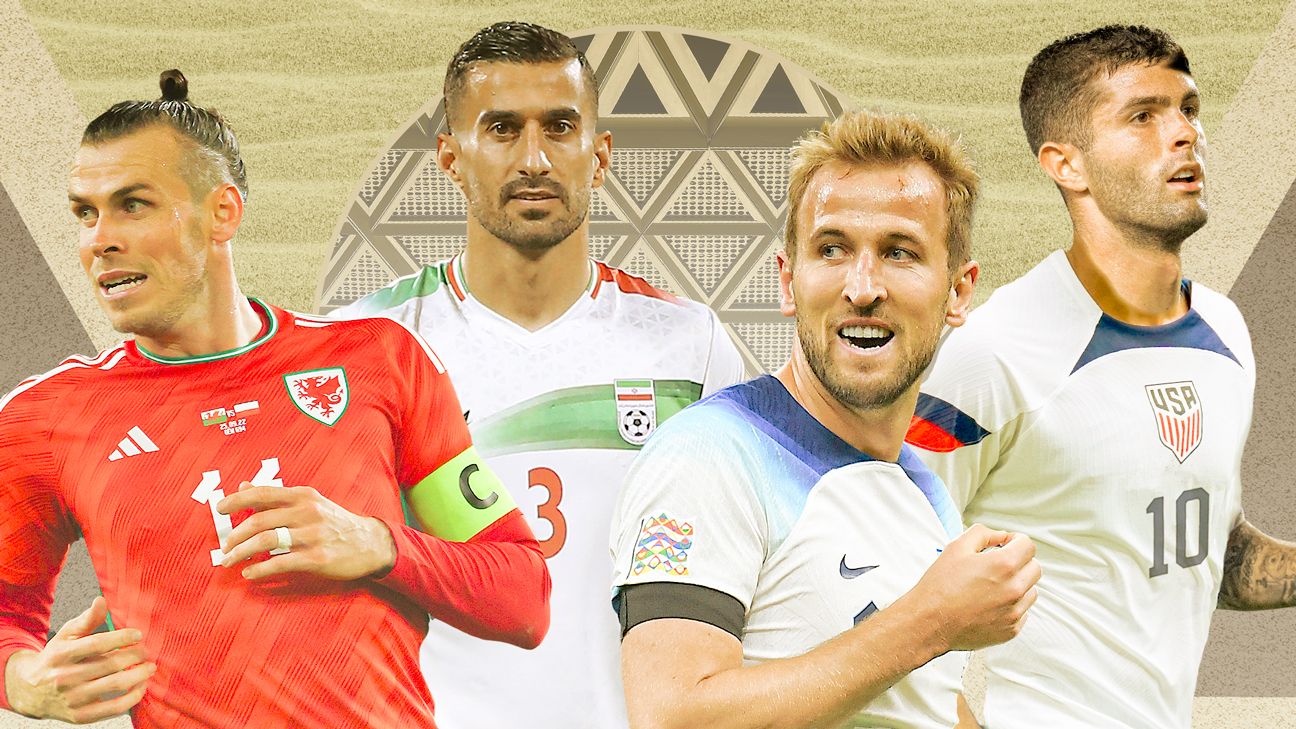 United States: “Group B is deceptively difficult. The U.S. team’s odds are 50/50 in terms of advancement. Based on recent form, their odds don’t look to be improving. Health will be a huge factor, but at this stage it looks like the U.S. will fall just short.” — Jeff Carlisle

England: “England will expect to get out of Group B but the draw quickly gets tricky. A last-16 tie against — most likely against either the Netherlands or Senegal — looks tough before a possible quarterfinal against France or Argentina. England simply have not defended well enough, often enough, for anybody to have a high degree of confidence they could win back-to-back matches against elite opposition.” — James Olley

Wales: “Wales face a tough task to replicate their recent tournament heroics. Nevertheless, although England are clear favourites to top the group, Page’s side will expect to be competitive for one of the top two spots and the fact they play England last could help in that regard.” — Olley

Iran: “In 2014, Iran picked up just one point from their group. Four years later, that tally was up to four points despite a more difficult draw. With years of experience under their belts and a coach who knows the ins and outs of this team, it might finally be time for Iran to reach the round of 16 at the sixth time of asking.” — Wael Jabir 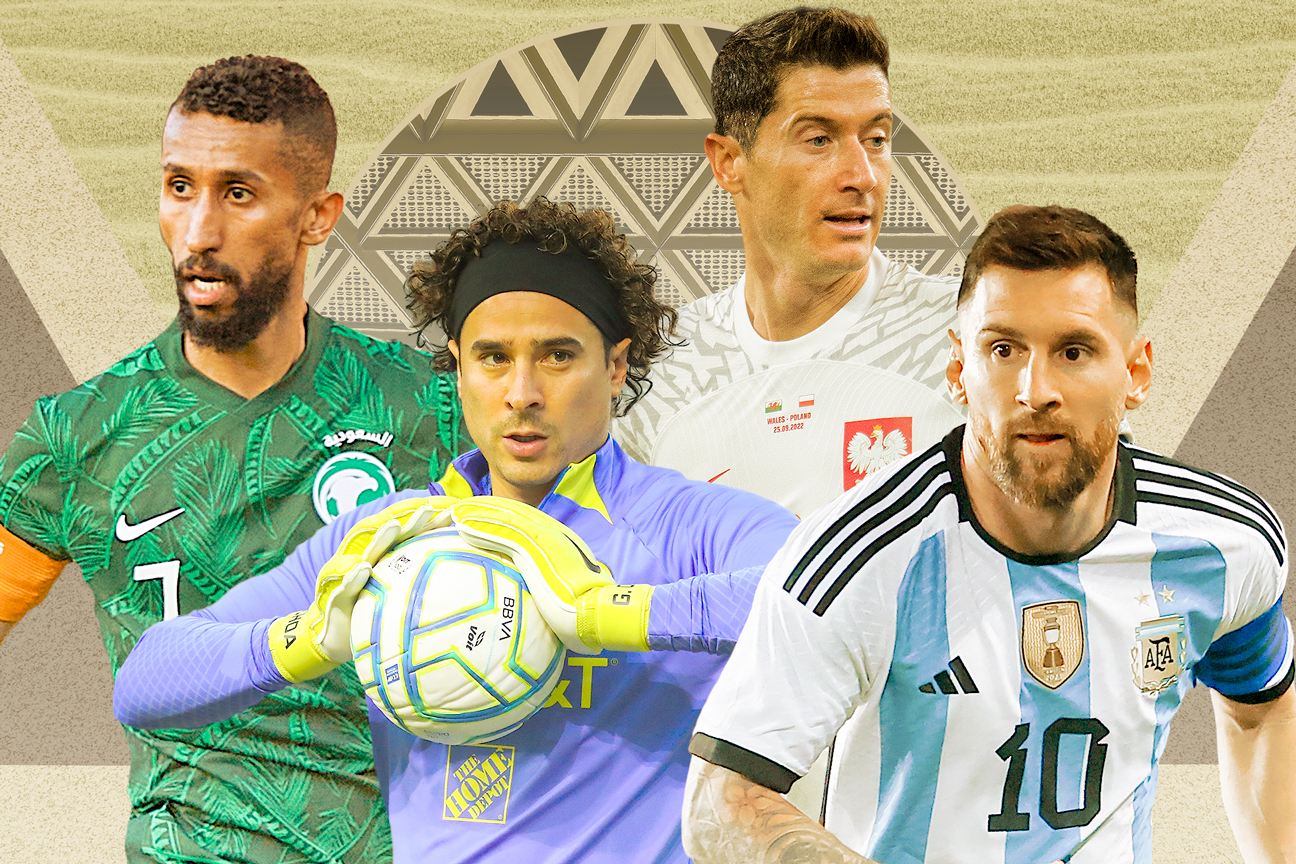 Mexico: “Argentina are likely to top the group, but El Tri should have the upper hand over Saudi Arabia and Poland to make the round of 16. However, it’s difficult to see them going much further, which would mean exiting before the fifth game for an eighth consecutive World Cup.” — Cesar Hernandez

Argentina: “If they hit form they will certainly be one of the most attractive sides in Qatar. They have every right to dream of walking off with trophy. In the collective sense of the word this is their best team in years, but is their defence good enough to go all the way? The semifinals might be their limit.” — Tim Vickery

Poland: “The first matchday in Group C will be crucial for Poland as they face Mexico in what could turn out to be the battle for second place behind Argentina. However, it is probable that they will not make it out of the group and will leave Qatar early.” — Constantin Eckner

Saudi Arabia: “Saudi Arabia have their work cut out. Avoiding heavy defeats will be the goal, and any points collected along the way will be a bonus for the second-lowest-ranked team in the tournament.” — Wael Jabir 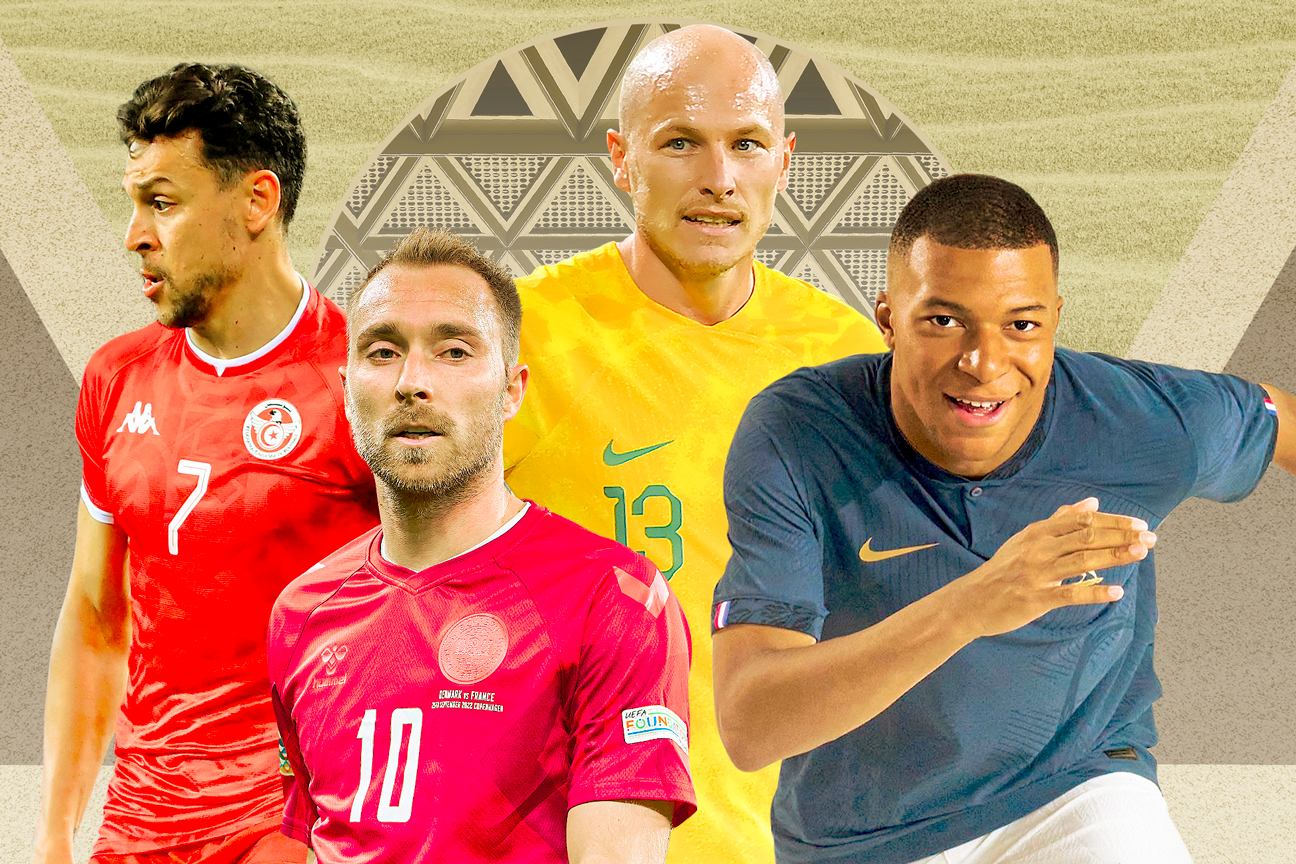 France: “It is very hard to retain a World Cup. The fact that the last time it happened — Brazil in 1962 — was so long ago shows it. However, France have the qualities to do it: incredible talent, experience and a team spirit to bring them together. If Mbappe and Benzema are at their best, France will be hard to stop.” — Julien Laurens

Australia: “True to form, Arnold has presented a publicly optimistic outlook, telling ESPN in August: ‘My expectation is the second round.’ However, delivering on that target would be one of the shocks of the tournament and a more realistic target would be a first World Cup match win since 2010.” — Joey Lynch

Denmark: “Denmark will embrace their underdog status and enter the World Cup as possibly the trickiest opponents to face. They have already shown they can compete with France, while they should be confident of advancing to the round of 16. In fact, nobody should be surprised to see this well-balanced, diligent side reach the latter stages.” — Tor-Kristian Karlsen

Tunisia: “On paper, Tunisia don’t have enough quality to progress. Even though confidence has been dented by that demolition by Brazil, Tunisia’s defensive solidity gives them optimism of neutralising the Danes and troubling France, but realistically, neither side will be too concerned.” — Ed Dove 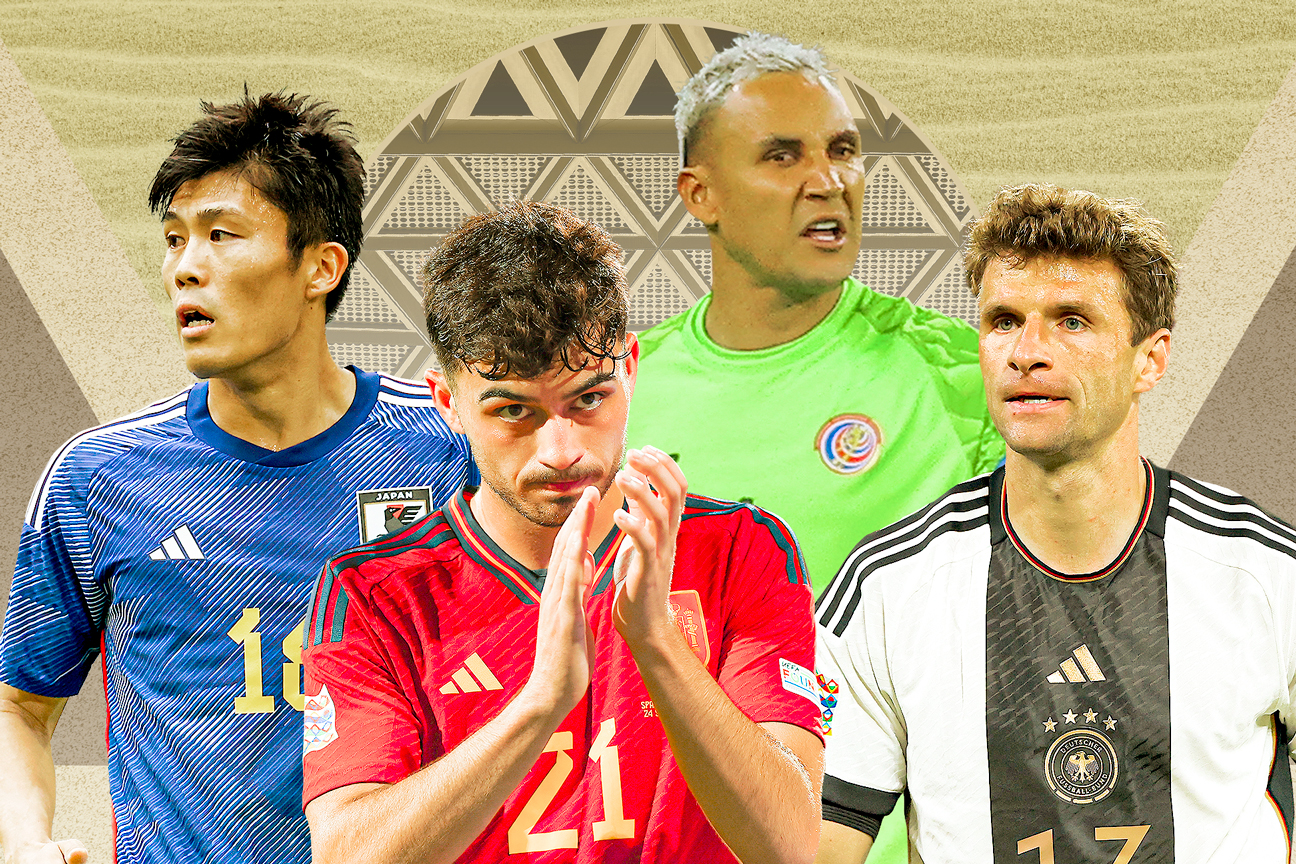 Germany: “Germany should get through the group stage if they can get results against Japan and Costa Rica, with Spain the toughest test on paper, which would be an improvement on 2018. However, it is unlikely that they manage to overcome their defensive weaknesses entirely to contend for the trophy.” — Constantin Eckner

Spain: “Not a group where Spain can have a bad day at the office. The order of the matches is the worst it could be: ultra-defensive Costa Rica; unpredictable but talented and physical Germany; then finally super-energetic, often thrilling Japan. If Spain escape the group their momentum can take them to the semifinals.” — Graham Hunter

Japan: “At any other World Cup, Japan would have had an excellent chance of making it out of the group stage, but Germany and Spain could just prove too much of a hurdle. It has not stopped Moriyasu from setting a quarterfinal target but it looks, for now, out of reach barring at least one major upset.” — Gabriel Tan

Costa Rica: “It is improbable that Costa Rica will get out of the group. Although some may point to their 2014 World Cup performance, where they topped an equally challenging group ahead of Uruguay, Italy and England, the odds of Los Ticos recreating that same magic are small.” — Cesar Hernandez 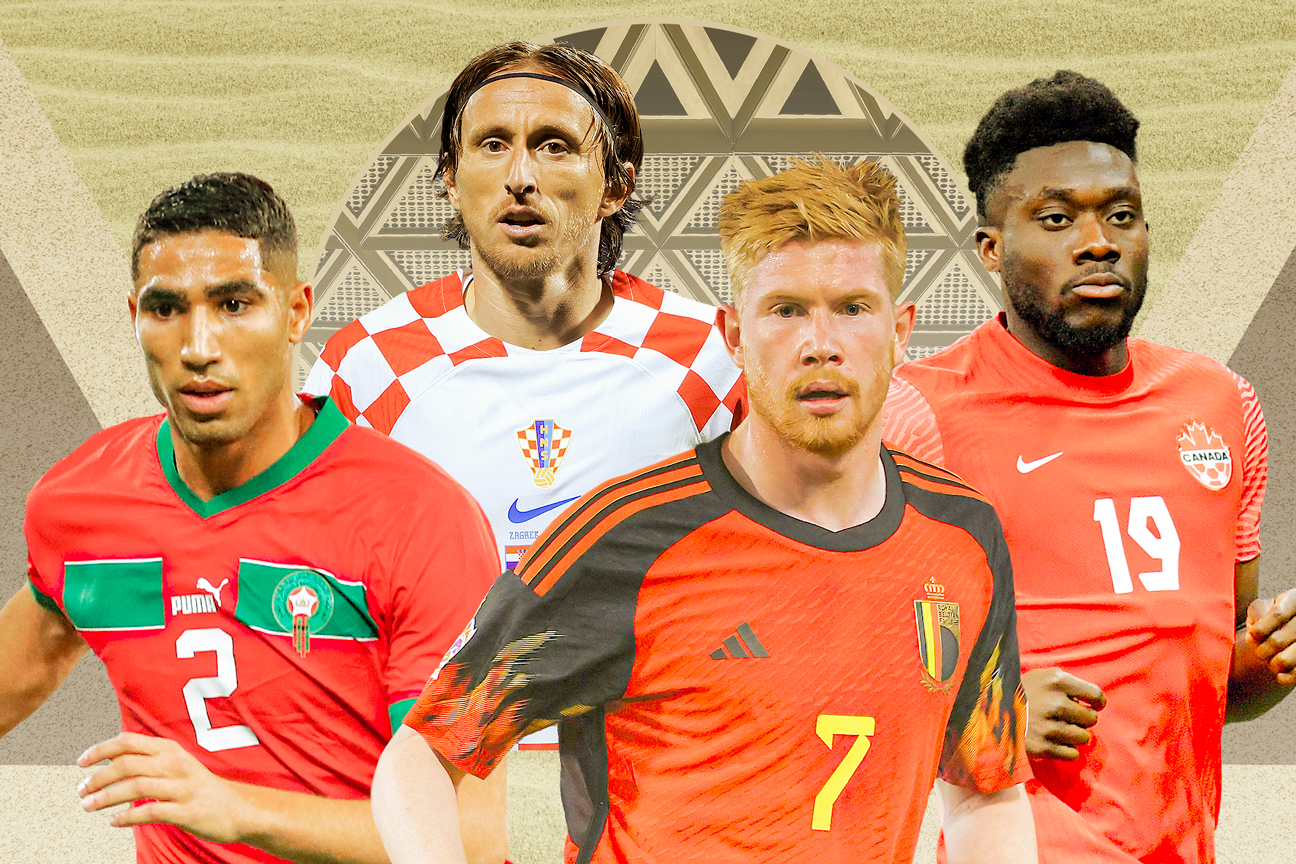 Belgium: “If Belgium can do as well as they did at the last World Cup and finish third then that would be an achievement. They are not going into this tournament with any momentum and are not among the favourites like they were four years ago. However, they are still talented and De Bruyne is a special player who can carry them far. I think a quarterfinal exit is a fair prediction.” — Julien Laurens

Croatia: “Croatia are on a similar level as their main group opponents, Belgium. They should have enough to get into the knockout rounds but winning the group could make all the difference. Should they come second, they will probably go out in the round of 16; as group winners, however, they could go one or two steps further.” — Alex Holiga

Canada: “The draw did Canada no favors. Could Canada spring an upset and advance? It’s possible, but looking at the opposition, progressing past the group stage seems a step too far for this side, despite all of their improvements.” — Jeff Carlisle

Morocco: “Morocco were mightily unfortunate in being pitted against Portugal and Spain in Russia, and can similarly rue their luck this time around. However, look a little closer, and both Croatia and Belgium have weaknesses that can be exploited. If the Lions get the balance right and identify a genuine goal threat, they can realistically hope to reach the knockouts for the first time since 1986.” — Ed Dove 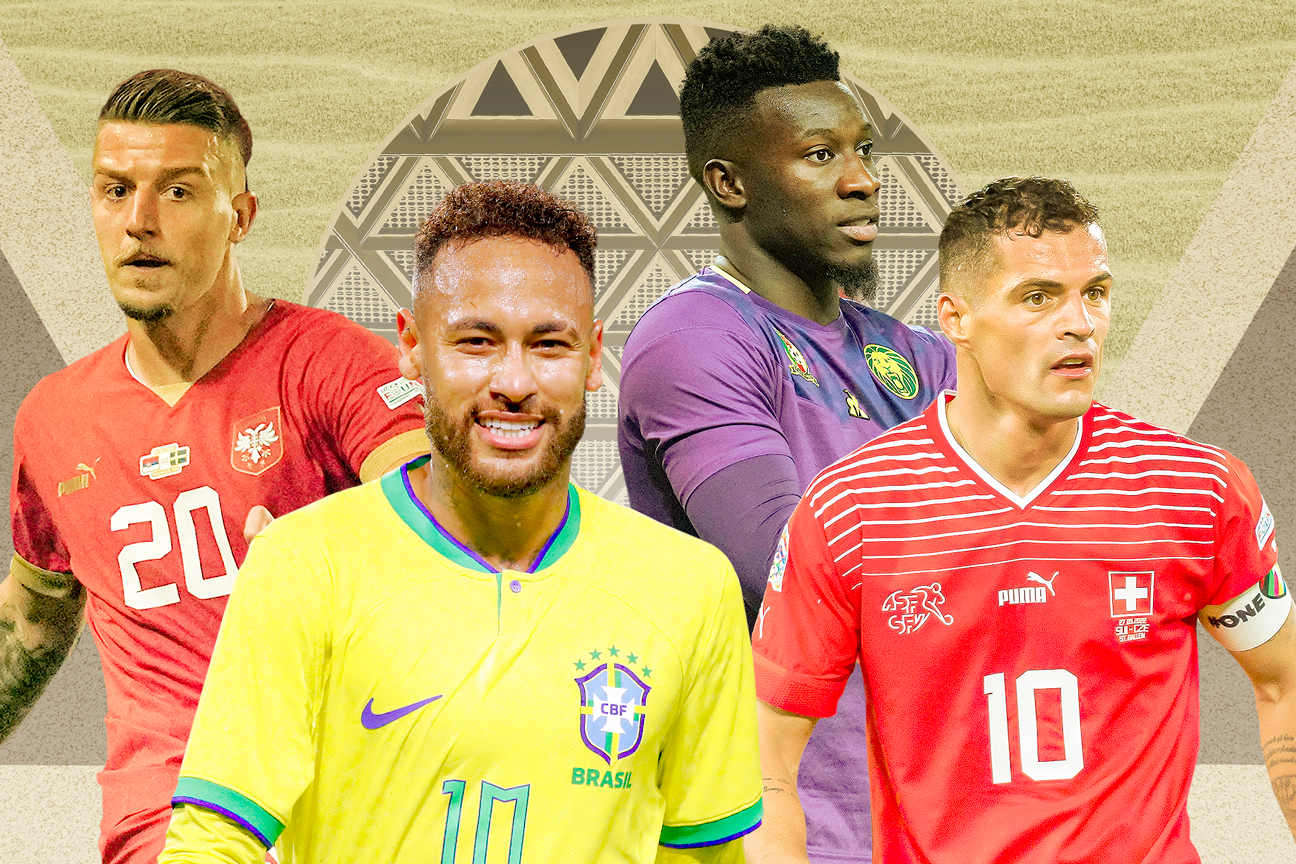 Brazil: “Brazil were not far off four years ago, when they were unlucky to lose to Belgium in the quarterfinals. They are a better side now and will take some stopping. Since their 2002 World Cup win, every campaign has ended after they met European opposition in the knockout phase. How will they cope with the European challenge this time? They are justified favourites.” — Tim Vickery

Serbia: “The group is quite difficult and even if Serbia manage to reach the knockout rounds, their next opponent won’t be any easier. Anything past the round of 16 is possible, but would be nothing short of a miracle.” — Alex Holiga

Switzerland: “The match against Serbia is likely to be decisive for Switzerland — not only because it will be their last in the group, but because the two teams are on a similar level and likely to fight for second spot behind clear favourites Brazil. If they beat Serbia, they will have a good chance to make the round of 16.” — Holiga

Cameroon: “The recent defeats by Uzbekistan and South Korea have brought Cameroon down to earth after the magical qualification against Algeria and Rigobert Song will know that a strong start against Switzerland is imperative. Even if they’re still alive by their final game against Brazil, Cameroon must still prove that they can hold their nerve to advance.” — Ed Dove 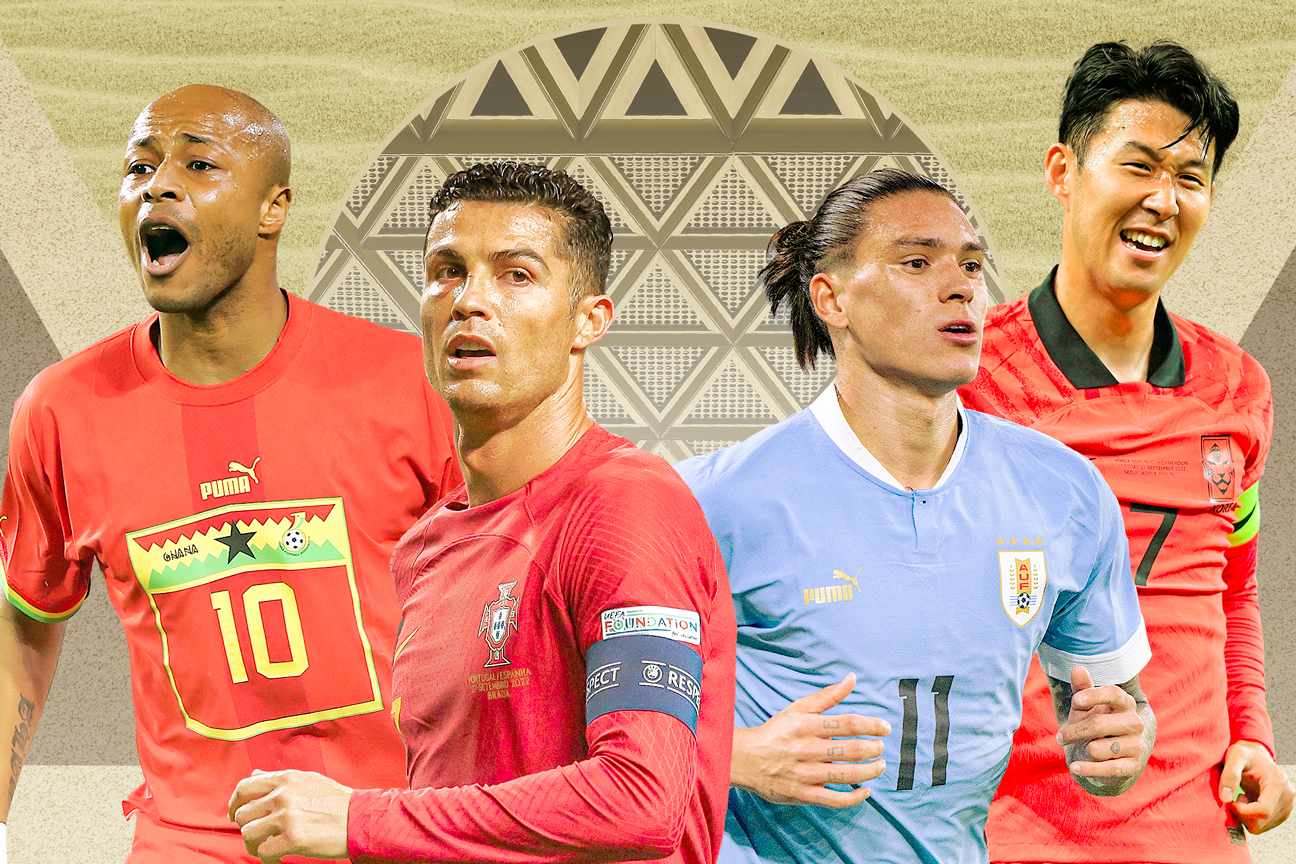 Portugal: “Not only do Portugal need to cope with an interesting and disparate group but they’ve got to be canny. Should Fernando Santos’ team finish second then, almost certainly it’s Brazil next in the round of 16. Too much, you might say. But if they win the group they may get to face Serbia.” — Graham Hunter

Ghana: “A tough group means they’re up against it, and a first-round exit looks likely. However, Ghana may be quietly confident that in grudge matches against ageing Portugal and Uruguay teams, their youth and vitality can cause an upset.” — Ed Dove

Uruguay: “One of the hardest teams to predict, because of their own dilemmas and also the ferociously balanced nature of the group. Coach Diego Alonso says the team are aiming to win the trophy, but if he fails to get the balance right, it could be a case of elimination at the group stage.” — Tim Vickery

South Korea: “If Son Heung-min is fit and firing, South Korea could stand a chance. Victory over Ghana is a must and, should they manage to get a point off either Portugal or Uruguay, a round-of-16 berth could be on the cards.” — Gabriel Tan

WHAT ELSE YOU NEED TO KNOW