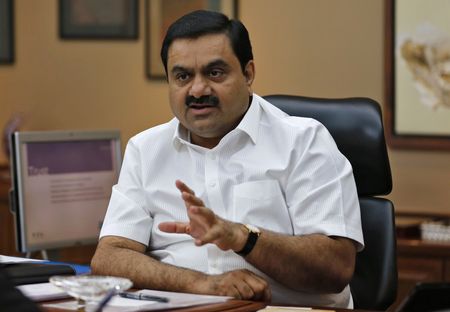 BENGALURU (Reuters) -India’s NDTV Ltd saw its shares jump 5% on Wednesday to a 14-year high after billionaire Gautam Adani’s conglomerate surprised the media group by saying it would buy a near-30% stake that could eventually lead to majority ownership.

NDTV stock, which has a market valuation of about $300 million, surged far beyond the price that Adani Group said it would pay in a subsequent mandatory open offer which could take its stake over 55%.

NDTV, which runs three channels, is known for its often critical stance regarding government policy and has been the target of income tax raids in recent years.

Gautam Adani, on the other hand, is widely seen as close to the administration of Prime Minister Narendra Modi. The tycoon’s fortune has soared in recent years, making him one of the world’s richest people.

“The developments … are totally unexpected,” senior NDTV official Suparna Singh told employees in a memo reviewed by Reuters. “We are in the process of evaluating the next steps, many of which involve regulatory and legal processes.”

NDTV journalists told Reuters on the condition of anonymity that they were fearful of job cuts and losing their editorial independence if Adani Group gained control.

Spokespeople for NDTV and the Adani Group did not respond to emails seeking comment.

NDTV in a statement late on Tuesday said Adani Group’s move came “without any input from, conversation with, or consent of the NDTV founders” Prannoy Roy and Radhika Roy.

Adani Group’s interests include coal trading, ports, power and edible oils. It has already announced deals worth billions of dollars this year.

On Tuesday, a unit of Adani Group said it was exercising rights to buy 29.18% of NDTV, which would trigger an open offer for another 26% in line with regulation.

Hours after the announcement, NDTV said https://www.ndtv.com/communication/29-of-ndtv-acquired-without-discussion-consent-or-notice-3279896 the Adani unit exercised its rights based on a loan agreement with the NDTV founders in 2009-10 under which a company now owned by Adani can purchase the stake from a company owned by the Roys, known as RRPR Holdings.

The Roys would be left with 32% of NDTV once the loan-linked deal involving RRPR closes, which is expected to be a formality.

“Almost the last bastion of Independent journalism being taken over by industry,” Kapil Sibal, a former government minister and a top lawyer, said on Twitter.

“We should be worried!”

“All TV channels have been suffering financially, and NDTV suffers a bit more because their rivals are aggressive marketers,” Chandramouli said.

“From a financial point of view, they are not marketing stuff; more like relying on their regular clientele. Markets may be reacting because the sentiment is that someone with money is coming in.”