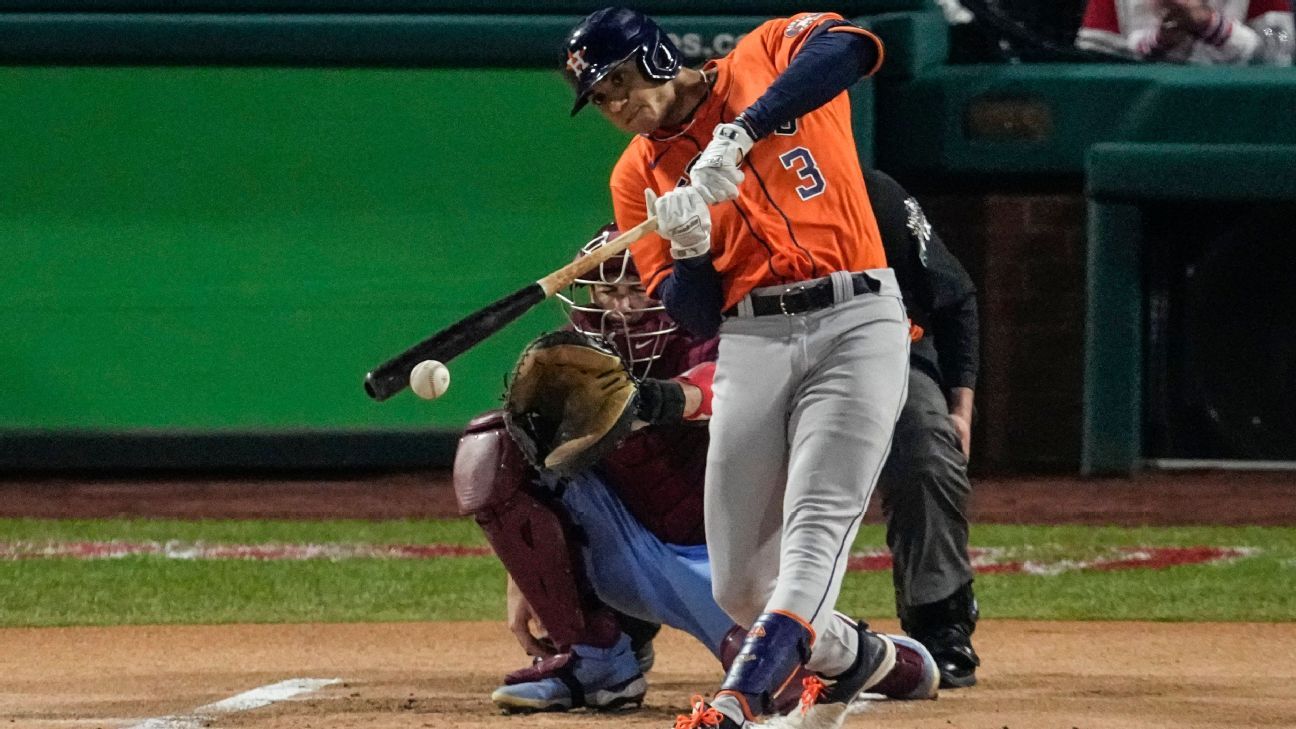 Game 5 of the 2022 World Series goes down Thursday night with the Philadelphia Phillies and Houston Astros battling for a 3-2 series lead.

Houston’s bullpen made history in Game 4, throwing the first combined no-hitter in MLB postseason history, according to ESPN Stats & Information research. Astros pitcher Cristian Javier dominated the Phillies’ lineup, throwing nine strikeouts in six innings. A relief effort from Bryan Abreu, Rafael Montero and Ryan Pressly finished things off. It was a significant contrast with Game 3, where the Phillies mashed five home runs off the Astros.

Thursday’s contest is the final one in Philly before the series shifts back to Houston. Will the Astros head back home with the 3-2 advantage or will the Phillies rebound from a disappointing Game 4?

Here are the best moments and takeaways from Game 5:

On the sixth pitch of the at-bat, Peña knocked the baseball over the fence on a 76.7 mph curveball.

With two hits in Game 5, Peña became the first rookie shortstop ever with a hit in five straight World Series games. — Joon Lee

Game 5 got off to a quick start.

Astros second baseman José Altuve started things off in the game’s first at-bat with a double that knocked off the right-center field fence and bounced past Phillies centerfielder Brandon Marsh, allowing Altuve to advance to third base. Astros shortstop Jeremy Peña immediately came through, singling up the middle on the first pitch of his at-bat against Philadelphia starter Noah Syndergaard to score Altuve and make the score 1-0.

2 batters in and the @Astros have the lead! #WorldSeries pic.twitter.com/tL8JQNYxfU

Philly bounced back immediately in the bottom half of the inning. On the second pitch of the game from Astros starter Justin Verlander, Phillies slugger Kyle Schwarber blasted a line drive homer over the right-field fence to tie the score up 1-1. — Joon Lee

Philadelphia is pulling out all the stops to bring good vibes to Citizens Bank Park.

Before Game 4, rapper Meek Mill performed “Dreams and Nightmare” on the field to hype up Phillies fan before exiting the field with the Phillie Phanatic on a 4-wheeler. Two Philadelphia icons pulling out all of the stops to cheer on the hometown team.

No word yet on whether the Phanatic will get a guest feature spot on Meek’s next album. — Joon Lee

Meek Mill and the Phillie Phanatic: the crossover I never knew I needed pic.twitter.com/hPqLQtFxOQ

Putting on for their cities

Bryce bringing the 🔥 with this jacket. #WorldSeries pic.twitter.com/b36FqZbNtQ

The Phillies will rock their vintage powder blue uniforms for Game 5.

Bringing the powder blues to the World Series pic.twitter.com/UwOCpqingU