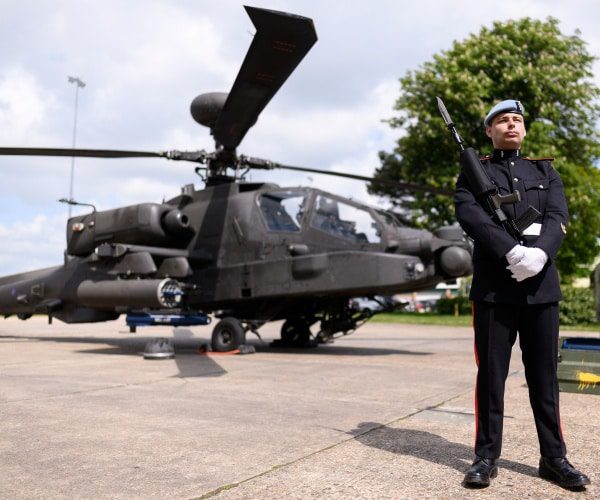 The British government is reportedly sending four missile-capable Apache helicopters to Ukraine, as its ongoing war with Russia approaches the 11-month anniversary.

According to The Daily Star, the infusion of Apache helicopters could be a “game changer” for the Ukrainian army. It also might temporarily appease Ukrainian President Volodymyr Zelenskyy’s public request for allied countries to ship more aircraft in support packages.

The state-of-the-art Apache AH64 E comes equipped with deadly missile controls, which can “detect more than 250 targets at a time from over 10 miles away,” according to the Daily Star.

The Apache helicopters also have the capabilities to eliminate multiple targets in just seconds.

Each chopper reportedly contains the same engine as a Rolls Royce and can hit maximum speeds of more than 180 mph.

“The Apache will be a major game-changer,” according to the Daily Star’s source.”The [Challenger 2 battle] tanks will arrive first and it will take a while before helicopters can be deployed. Other NATO members will now follow suit.”

The source then added: “Russia has thousands of tanks, so it will take more than four Apaches to have a strategic impact. But tactically, it is a major step.”

The Daily Star reports the Ukrainian pilots will soon begin United Kingdom-based training for the helicopters.

A similar instructional plan will be carried out in the United States. The Pentagon recently announced that 90-100 Ukrainian soldiers will be trained at Fort Sill in Oklahoma, with a special emphasis on teaching the troops how to operate sophisticated air-defense systems provided by the U.S. military.

“[Russian President Vladimir] Putin is a bully, and he’s going to continue to [push the issue],” Sen. Markwayne Mullin, R-Okla. told Newsmax this week, while appearing on “The Record with Greta Van Susteren.”

For the ongoing Russia-Ukraine war,  Mullin said that “Putin has this vision of bringing the old Soviet Union back together. And he’s taken away what little democracy [Russia] had and moving them strong into a communist country.

“Who’s fighting on that front line now? It’s Ukraine. … I don’t think we need to be on the front line … our training [at Fort Sill] is the best,” added Mullin.