Brooklyn Nets GM Sean Marks, in his own words 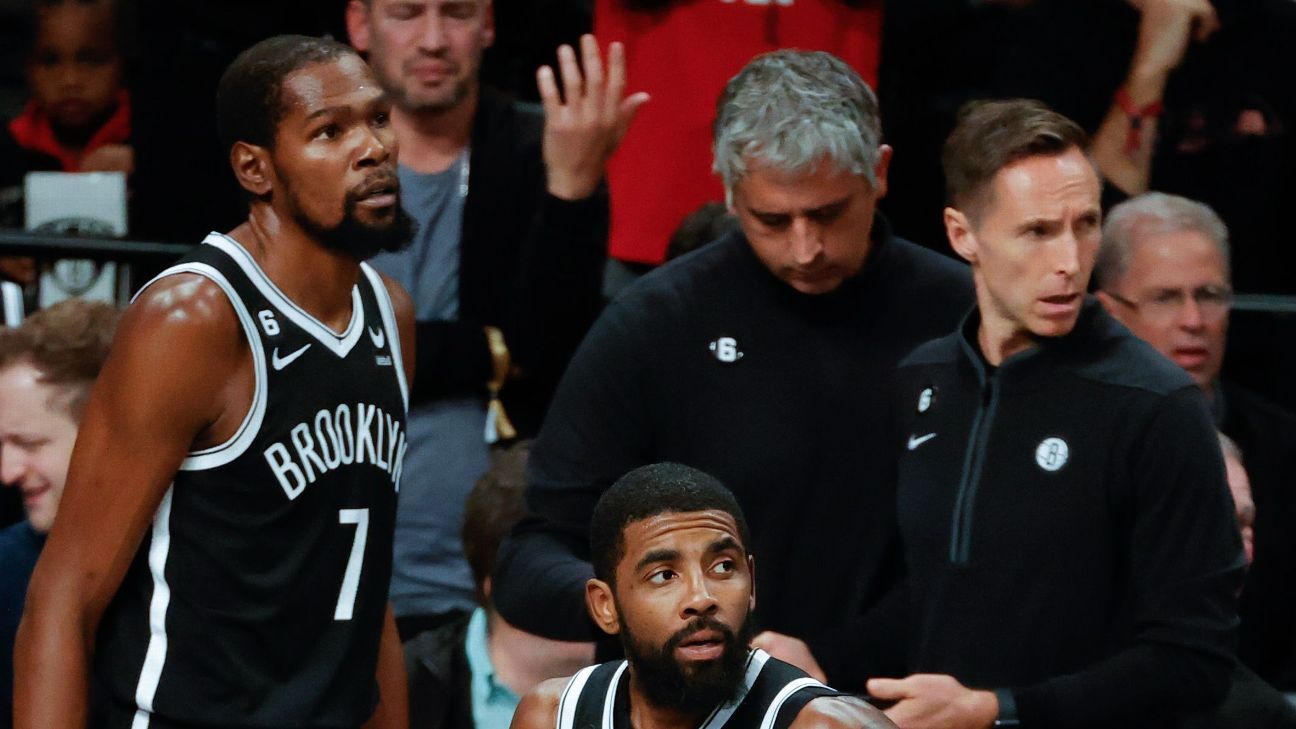 Brooklyn Nets general manager Sean Marks has had to deal with numerous high-stress days and get through a handful of uncomfortable news conferences over the past year.

Marks had to explain why he mutually parted ways with coach Steve Nash just seven games into the season — while apparently already having engaged in a complicated process to name a controversial potential replacement, reportedly Ime Udoka.

All of this news as Kyrie Irving had thrown the team into yet another tempest, which the Nets publicly had done little about, with Marks having to address numerous questions while Irving was spared from facing scrutiny for a second consecutive day.

In facing tough questions over these past months, Marks often would do it alongside Nash, a longtime friend. Nash was relieved of this duty as well, and the general manager handled it alone.

Here’s an annotated look at what Marks said — and didn’t say — as the franchise faces drama on at least three different fronts:

On whether Nets players were consulted in the decision to move on from Nash:

“Zero. There was zero input from any of the players on this. I think this was a decision that we didn’t need that. Steve and I didn’t need that. Obviously I’ve talked to [owner] Joe [Tsai] about this, but the players were not consulted. They were told ahead of time that this was the direction we were going.”

On the timing of the mutual decision between the Nets and Nash:

“When we’re having these conversations, [Nash] is aware of ‘they’re not responding to me right now,’ or ‘that was not the performance I needed to see out there,’ and so forth. We were open with that dialogue always happening. And so you know, over the course of, you know, the last week, 10 days, we’ve just been talking and talking, and I think it came to a head.”

On whether the Nets have determined their next coach:

Kendrick Perkins breaks down what’s next for the Nets after Steve Nash’s exit.

On what a new coach would bring to the Nets:

“When I look at the group of guys out there, I would love to see them competing at the highest level. I mean, we saw games this year where, I’ll be honest, I don’t think we brought it. I’m not going to sugarcoat it. There were times where a quarter was taken off, a half was taken off, a game was taken off. We didn’t compete. … The candidates that we’re looking for, are going to be looking for, that’s going to be one of their attributes. Competitive and having a voice to hold guys accountable.

On whether the Nets would be comfortable hiring Udoka:

“Obviously, there’s a reason why we made this move when we did, because time is ticking. So we do want this process to be a thorough one. We’re not going to skip steps on that. And we’ll do our due diligence.”

On how Nets fans should react to the latest news and controversy:

“Look, it’s understandable. I’m completely empathetic to what’s going on here. I’m certainly not proud of the situation we find ourselves in, you know? … As it pertains to Kyrie, we are having discussions. … From the highest levels [that] we’re involved with the ADL [Anti-Defamation League] and getting their advice and just hopefully they can advise us. We can bring something to the table that both parties, all parties can be at least understandable to one another here and understand that there is no tolerance and no room for any hate speech, any antisemitic remarks whatsoever, whether it’s in this organization or any organization for that matter.”

Get access to exclusive original series, premium articles from our NBA insiders, the full 30 for 30 library and more. Sign up now to unlock everything ESPN+ has to offer.

On possible punishment for Irving:

“As I mentioned before, we’re talking to the ADL right now. That’s on the Joe Tsai level, our CEO and myself and the group, and really just trying to weigh out exactly what the best course of action is here. Part of it is going to be getting sides together so they can understand where people are coming from. There’s an education piece for everybody here. There’s an empathetic piece to this and understanding that we need to move on and we need to do the right thing without a doubt.”

Beyond a punishment, the topic of Irving still playing with the Nets is addressed:

“We have tried to do a little bit of both to be honest. By keeping him — he did not do media last night, he’s not going to do media tonight. At some point he will come up here and do media again, but I think at this point it’s, we don’t want to cause more fuss right now, more interaction with people. Like, let’s let him simmer down and let’s let this whole, I guess let’s let cooler minds prevail. We need to go out and educate ourselves, educate the whole group and get some direction, seek from the experts, and one of them is certainly the ADL.”

Kevin Durant says he was surprised by Steve Nash’s departure from the Nets.

On why Irving still isn’t talking with the media:

“Everybody knows he’s going to have to answer these questions at some point, and he hasn’t sort of shied away in the past, but I think the last postgame meeting didn’t go well and we’re not trying to cover it up. I think this is something that has to be addressed, but let’s address it in the right form or fashion, and when that is we’ll let you guys know.”

On whether the Nets can still chase a title this season:

“… My job here is to put this team, this organization in the best possible place to succeed, not only now but long term. We don’t want to skip steps. We don’t want to fast track it here. But we do realize, I’m going to be honest, we have a window here and when we have this group of players and this salary cap, and where we are, we hope to achieve that. I think we’ve all seen what’s happened over the course of the last few years, there’s been plenty of teams that at one point looked a certain way and made some moves and they changed. We hope to be one of those teams, by [arriving] at the decision we will [make] in the next few days, hopefully, that will be a catalyst for a turnaround.”

On how the Nets’ recent actions and changes will affect Durant:

“You know, I think we have to factor all of these things in. I mean, it’s certainly not an easy decision to get to this particular junction right now and when we make the decision on who we will hire, I think we have to look at what’s best for us now but also long term.”