These protests are momentous. Wherever they lead, they are already hugely significant.

China has witnessed bigger protests in Hong Kong, but nothing on the mainland has come close to this since 1989.

Unrest is actually commonplace in China but demonstrations are usually small, localised and easily quashed.

What will worry China’s leadership about these protests is their size, their spread across the country, and their persistence.

The authoritarian Chinese Communist Party has not seen a threat like this since the pro-democracy movements of the late 1980s that culminated in the brutal Tiananmen Square massacre.

The spark this time was an apartment fire in the western city of Urumqi that took at least 10 lives.

But these protests have been coming for months.

Seething anger and resentment at the government’s zero-COVID policies has been building. There is something more fundamental going on, though.

According to popular wisdom, ever since that infamous massacre at Tiananmen, the Chinese Communist Party and the people have had a deal.

We will make you more prosperous and keep society stable, and you will let us get on with running the country.

Stability and prosperity mean everything to the Chinese because, as they have learned since childhood, theirs has been a history of chaos, poverty and upheaval. The people have trusted their government to make sure that stays in the past.

During lockdown, however, the people have begun to doubt their government and its competence to rule.

Under the zero-COVID policy, people have been locked in their communities for months and they fear the state’s heavy handedness is killing people – in this case burned alive, locked in an apartment block in Urumqi.

And making matters worse, under lockdown, the economy has not continued on its ever upward trajectory.

The Chinese know the rest of the world is moving on from COVID while they are not. The sight on their televisions of World Cup crowds in their thousands without masks is proof of that. That compact between state and people is no longer delivering like it used to and it means we are in uncharted waters.

And more unrest is almost certainly on its way.

Instead of saving lives by importing more effective vaccines from the outside world – but losing face – his government has tried to eliminate the virus wherever it appears with draconian social controls.

But it has not worked and China is battling outbreaks in a multiplying number of cities. If people continue to protest and defy the lockdowns, the virus will spread.

China is not prepared medically, though.

As Professor Kerry Brown, of King’s College London, puts it: “They have to quite quickly put in place emergency measures for the health service to take a kind of spike in numbers that might need to be hospitalised.” 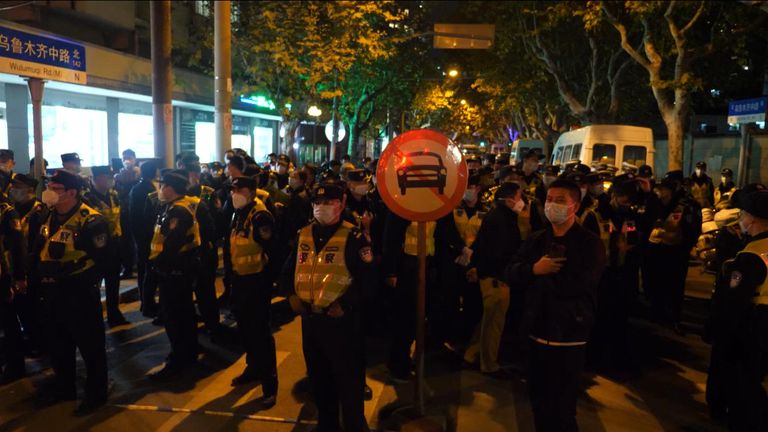 Rare street protests in China as police charge in

Tracking, tracing and locking down may work with a quiescent population, but for an angry citizenry losing trust in the authorities, it does not.

“If you continue with the policies that have been in place at the moment, you’re going to get more and more of these protests and they could morph into something far more threatening,” Prof Brown added.

What the Chinese government fears most is a nationally organised opposition, knowing it has spelled the doom of dynasties in the past.

When a harmless spiritual movement called Falun Gong went countrywide in the 90s and its followers surrounded Zhongnanhai, the government compound in Beijing, in a peaceful protest, the leadership was terrified and used the most draconian repression to stamp it out.

It has invested billions in an emerging Orwellian surveillance state to anticipate dissent and unrest and prevent it from spreading.

It now faces nationwide unrest erupting spontaneously. It will no doubt use all the resources of its totalitarian state to try to repress it, but faces its biggest challenge in more than three decades as it tries to do so.