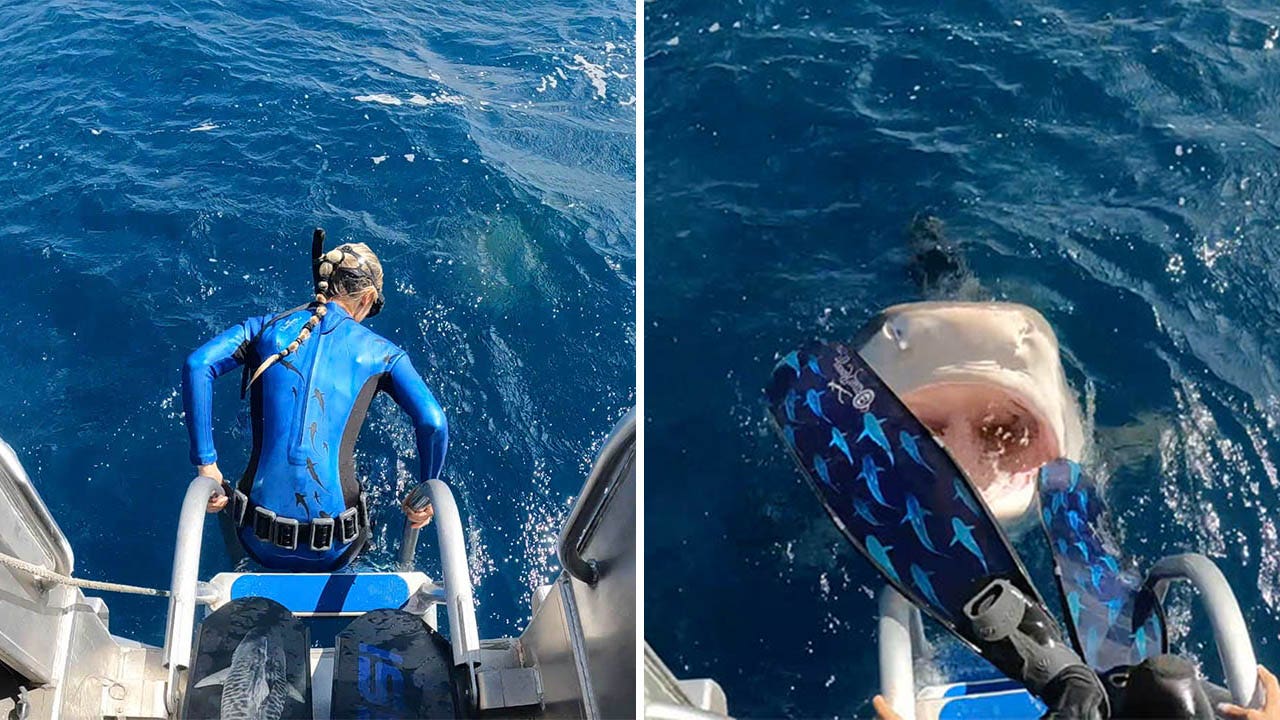 A close encounter with a tiger shark was caught on video off the North Shore of Oahu, Hawaii.

Ocean Ramsey, a marine scientist and free diver, was having what she described as a normal day when she nearly dove into the mouth of a “friend” — Queen Nikki, as a certain tiger shark in the area is called.

Ramsey said she’s known this particular shark for nearly 20 years — and was excited to see her again.

SHARK ATTACKS: EXPERTS SHARE FACTS ABOUT THE OCEAN PREDATOR AMID UPTICK IN SIGHTINGS

“Sharks like Queen Nikki are rare to see, let alone encounter — and I’ve got thousands of dives and decades of experience,” Ramsey told Fox News Digital.

“She is one of my absolute favorite tiger sharks,” she also said.

Marine scientist Ocean Ramsey was entering the water when she spotted Queen Nikki, a tiger shark known in the area, coming up quickly toward her.
(@Juansharks/@OceanRamsey/@OneOceanDiving)

In the video, Ramsey can be seen about to dive into the ocean water when Queen Nikki jumped up at her, splashing her fins.

Ramsey said she had seen this shark just moments earlier, when she jumped in the water to redirect Queen Nikki and grabbed a piece of plastic floating in the water.

SHARK QUIZ! HOW WELL DO YOU KNOW YOUR SHARKS THIS SUMMER?

“I didn’t realize how bad the visibility was in my rush until I saw her white belly coming up out of the haze,” she said.

This tiger shark — known as Queen Nikki to divers and others in the area — came up out of the water toward Ramsey.
(@Juansharks/@OceanRamsey/@OneOceanDiving)

Ramsey believes the shark was moving quickly toward the school of fish that were hiding under their boat.

“The white on the bottom of my fins, the splashing from my fins and the dive ladder and shadow cast probably added to her excitement,” she said.

SHARK TOOTH HUNTING: HOW TO FIND TOOTHY TREASURES AND WHERE TO SEARCH

Although this was a close encounter, Ramsey said she and her team continued on with their day — and did dive in the same area immediately after they caught that moment on video.

Ramsey said she simply waited for Queen Nikki to pass.

She then looked for other sharks before getting back in the water.

Ramsey quickly climbed back up into the boat and waited for Queen Nikki to leave the area.
(@Juansharks/@OceanRamsey/@OneOceanDiving)

Ramsey was diving as she does every day for the One Ocean Ramsey organization.

The organization also offers snorkeling opportunities to the public. They teach people about shark behavior and how to enjoy time with the predators rather than fear them.

Oliphant told Fox News Digital that this particular day of diving was special — but that the show must go on.

“We always evaluate shark behavior before inviting others to join us in the water.”

“We laughed and got in the water with these misunderstood apex predators to conduct our usual research and collect more footage for our conservation efforts,” he said.

“We always evaluate shark behavior before inviting others to join us in the water,” he said.

The organization recommends that anyone interested in shark diving only do so with a professional.

Ramsey and Oliphant are co-authors of the book, “What You Should Know About Sharks: Shark Language, Social Behavior, Human Interactions and Life-Saving Information.”