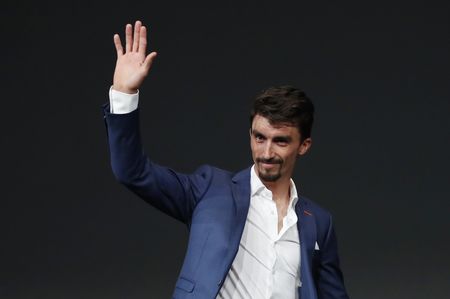 SYDNEY (Reuters) – Australian cycling fans will get their first chance to witness elite racing after two years of COVID-19 isolation when the world road race championships come to the coastal city of Wollongong from this weekend.

While passion for cycling might not be as intense in Australia as it is in its European heartland, pelotons are a familiar sight on the weekend roads and significant numbers of fans stay up all night to watch the Grand Tours on TV.

For the next week, it will be the European enthusiasts with the bleary eyes as locals get to see the likes of Annemiek van Vleuten and Wout van Aert flying past on Australian asphalt some 80 km south of Sydney.

The action gets underway with both elite time trials on Sunday and the men’s elite road race concludes the championships a week later on a picturesque 266.9 km course winding through coastal hinterland.

Julian Alaphilippe will undoubtedly welcome a few extra days to get his bearings before he bids to become only the second man to don the rainbow jersey three years in a row, matching Peter Sagan’s feat from 2015 to 2017.

The Frenchman was a serious doubt for his double title defence after dislocating his right shoulder in a nasty fall in the 11th stage of the Vuelta but has decided to travel.

His Quick-Step Alpha Vinyl team mate Remco Evenepoel, fresh from his Vuelta triumph, will be competing against him in Wollongong as part of a strong Belgian challenge spearheaded by Olympic silver medallist Van Aert.

Slovenian Tadej Pogacar, who won the Montreal GP last week, will also be out to snatch the jersey away from Alaphilippe, as will Dutchman Mathieu van der Poel, who confirmed his form by taking out the GP de Wallonie on Wednesday.

The Dutch will also be ones to watch in the elite women’s race a day earlier with 2019 champion Van Vleuten, Demi Vollering and last year’s runner-up Marianne Vos leading the charge on a relatively hilly 164 km course.

Italian Elisa Balsamo defends the title, Dane Cecile Uttrup Ludwig can be counted on to attack the climbs, while Belgian Lotte Kopecky is always a threat in a sprint finish.

The event starts with a world championships first on Sunday as both men and women compete on the same elite time trial course over the same distance (34.2 km) on the same day.

Olympic champion Van Vleuten and reigning champion Ellen van Dijk give the Netherlands a good chance of gold in the women’s event, although Swiss Marlen Reusser should be there or thereabouts.

In the men’s event, Filippo Ganna will emulate Australian Michael Rogers and more recently German Tony Martin if he can secure a third straight title.

The Italian will not have to contend with Van Aert, who will focus solely on the road race, but Evenepoel, Pogacar and Swiss Stefan Kueng should challenge over the two laps of a twisting course that starts and finishes on the beach.

Home hopes will rest on a team led by Jai Hindley, who became the first Australian to win the Giro d’Italia in May, and Michael Matthews, a former under-23 world champion.

Grace Brown has the backing of a strong Australian women’s team and that could bring her into contention on a road race course that will play to her aggression.