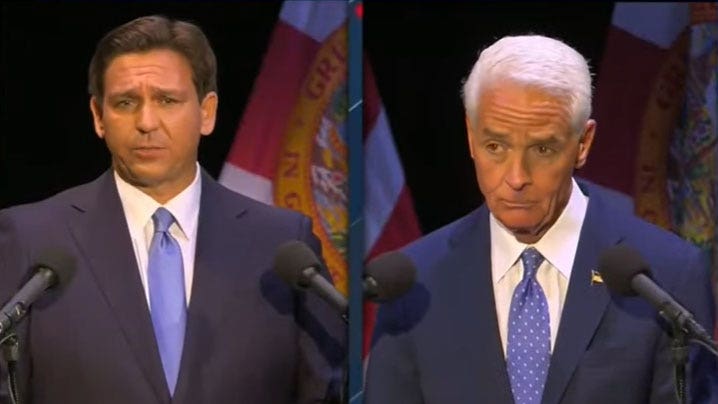 Politico reported that “more than a dozen Democratic operatives, consultants and elected officials” are admitting that they’re going to lose badly in major Florida midterm races.

The Thursday report indicated that Democrats observing key races in Florida, including the Senate race between Rep. Val Demings, D-Fla., and Sen. Marco Rubio, R-Fla., and the gubernatorial race between Gov. Ron DeSantis, R-Fla., and Democratic challenger Charlie Crist, see these contests “slipping away from them.”

The piece relayed their concerns that major Democratic donors seemed to have abandoned these candidates, which signals Florida may no longer be competitive for Democrats.

DEMOCRATS WONDERING ‘WHY WE SUCK’ AS THEY FACE POSSIBLE MIDTERM LOSSES: POLITICO COLUMN

This “would have dire implications for the next presidential election,” the article warned.

Titled, “‘Going to be ugly’: All signs point to Republican landslide in Florida,” the report opened with a stark assessment for liberal voters: Florida Democrats are bracing for a very bad night on Nov. 8.”

Democrats have started sounding the alarm on their races ahead of the election. Politico wrote, “Democrats are signaling that key races are slipping away from them. They point to ominous signs and missed opportunities, including the party’s message on abortion rights and gun control that isn’t resonating.”

In addition, there is “a lack of coordination between the campaigns of Rep. Val Demings, who is vying to unseat Sen. Marco Rubio, and Charlie Crist, who is challenging Gov. Ron DeSantis.”

The most unfortunate scenario for Florida Democrats, the piece claimed, is that “national organizations and donors have all but abandoned their candidates — setting off fears that Florida is no longer viewed as competitive.”

This will hamper the 2024 presidential race as well. Veteran Florida Democratic fundraiser Greg Goddard told the outlet, “If Democrats follow this building national narrative and decide not to compete in Florida in 2024, it will be one of the most short-sighted decisions of the last 30 years.”

Goddard asked, “Where do we think the pathway to winning a future presidential election lies?”

Politico claimed that “Interviews with more than a dozen Democratic operatives, consultants and elected officials reflect that there’s little optimism ahead of the midterms and longstanding issues that show the once-perennial swing state may be lost to them.”

Listing several points bolstering this dismal outlook for Democrats, the article noted, “The Democratic Governors Association spent just $685,000 this election cycle. It gave $14 million to Florida in the past two governor races;” that “Big outside donor money has almost completely dried up;” Republicans are “making headway in Miami-Dade County, which has long served as a blue stronghold;” and that Republicans have vastly outspent Democrats.

The Florida state flag displays “In God We Trust” on the seal.
(REUTERS)

Summing up the situation, Politico stated, “It all seems to spell doom for Democrats. Some think the party is just waving a white flag.”

The outlet cited Democratic state Senator Jason Pizzo, who stated, “What have Democrats done? Not enough.” It also featured a blurb from Democratic consultant Matthew Van Name, who was shocked at how a recent campaign event for Democrats in “one of the strongest Democratic performing swing counties,” only had “50 or 60 people show up.” He declared, “2022 is one of the most uncomfortable and segmented cycles I’ve seen.”

South Florida-based Democratic consultant Evan Ross predicted, “I think Ron DeSantis will win Miami-Dade County. Democratic voters are not at all excited or motivated by Charlie’s campaign.” He also quipped, “The only thing that might give Charlie Crist a chance of becoming governor would be DeSantis aggressively campaigning for him over the next two weeks.”

Ross added, “Translation: It’s over. And it’s going to be ugly.”