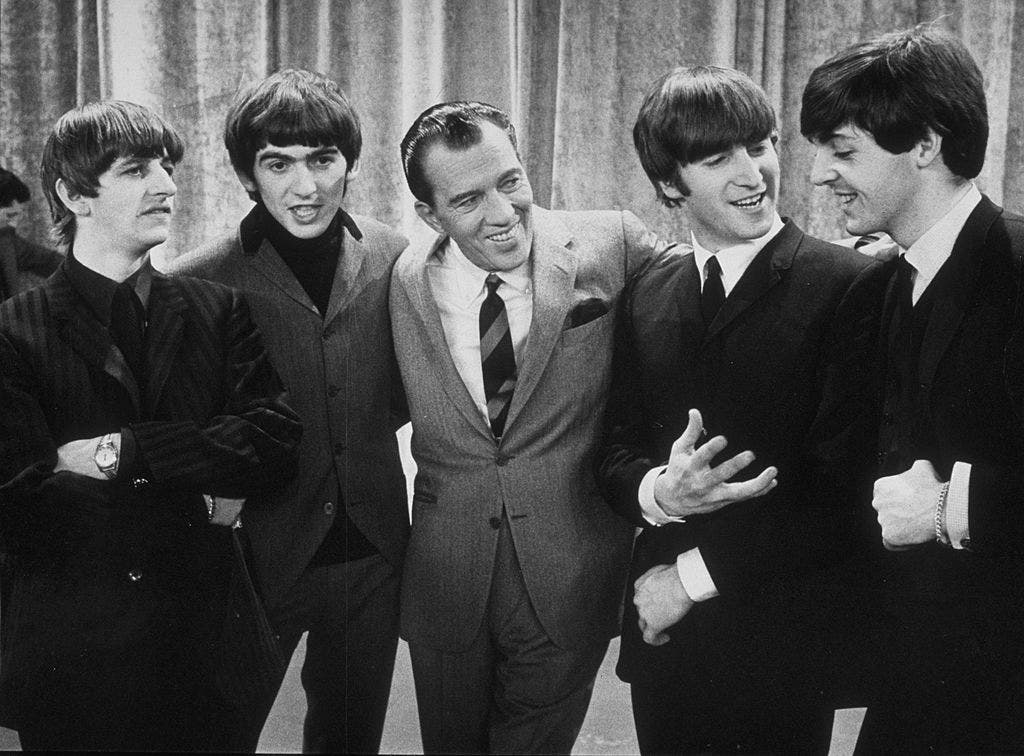 Legendary American television host Ed Sullivan was haunted by an apparition he encountered for the first time at Heathrow Airport on Halloween in 1963.

The pop culture poltergeist he witnessed that day in London would soon invade America — and leave in its wake a nation of hysterical screaming teenagers.

It was called Beatlemania.

The music world has never been the same.

ON THIS DAY IN HISTORY, AUGUST 29, 1966, THE BEATLES PLAYED THIER LAST LIVE PAID CONCERT

The Beatles had just returned from a tour of Sweden on Oct. 31, 1963, and received a raucous welcome home from fans in Britain, where they already dominated the charts.

Sullivan just happened to be at Heathrow that day with his wife, awaiting a flight to New York City.

“The noise [that the Beatles fans] made was the sound of the future,” former Rolling Stones manager Andrew Loog Oldham wrote in his 2001 book, “Stoned: A Memoir of London in the 1960s.”

“Even though I hadn’t seen the world, I heard the whole world screaming. I didn’t see it — I heard and felt it.”

Sullivan apparently heard and felt the same sound of the future — unparalleled in pop culture history.

The American television host was no stranger to teen-idol pandemonium. His Sunday night variety show debuted in 1948 — it ran until 1971 — and already had a long history of making stars out of up-and-coming performers.

Dean Martin, Jerry Lewis and Elvis Presley were among those who received national acclaim on “The Ed Sullivan Show.”

Yet the frenzy surrounding the Beatles that Halloween was so overwhelming it instantly caught Sullivan’s ear — and unleashed the chain of events that brought the Beatles to America and launched the wider phenomenon of the British Invasion.

The Beatles in 1963 placed five songs in the U.K.’s Top 20, including three No. 1 hits. They had played live for the Royal Family and were routinely seen on British TV — and their debut album “Please Please Me” spent much of 1963 atop the British charts.

But the Fab Four were still largely unknown in the United States when America’s most influential star-maker witnessed the hysteria at Heathrow.

“After seeing the Beatles’ reception on October 31, 1963, at the airport, Ed had interest in booking the Beatles,” wrote EdSullivan.com.

“On November 5, 1963 [Beatles manager Brian] Epstein flew to New York and [friend Peter] Pritchard contacted Sullivan. Epstein met Sullivan at the Delmonico Hotel on Nov. 11 and the deal was done on a handshake,” the same source noted.

Photo of the Beatles — left to right, Paul McCartney, John Lennon, Ringo Starr and George Harrison — as they left Heathrow Airport for a final tour of the USA with cheering crowds seen everywhere.
(Photo by Cummings Archives/Redferns)

The Beatles made their first of three appearances on “The Ed Sullivan Show” on Feb. 9, 1964 — widely considered a landmark moment in global pop-culture history.

“The television rating was a record-setting 45.3, meaning that 45.3 of households with televisions were watching,” EdSullivan.com noted.

“Ed Sullivan met [Beatles manager] Brian Epstein in New York on Nov. 11 and the deal was done on a handshake.”

“By early 1964, in fact, America had mostly left rock & roll behind,” wrote Rolling Stone Magazine in a 2014 chronicle of the Heathrow encounter.

“Buddy Holly had died, Jerry Lee Lewis and Chuck Berry had been blacklisted, Elvis had joined the Army, and pioneering rock DJ Alan Freed had been booted off the air — all these events neutered rock’s early spirit and hindered its future.”

That spirit of rock ‘n’ roll rose again at Heathrow Airport on Halloween 1963.