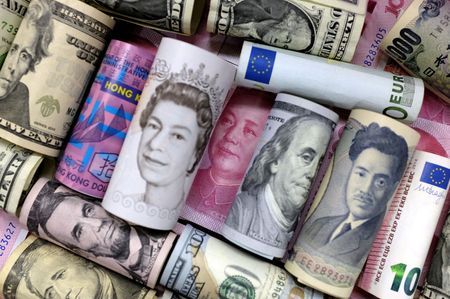 By Rae Wee and Alun John

SINGAPORE/LONDON (Reuters) – The euro and sterling were on Tuesday trying to recover from multi-year lows against the dollar hit the day before, as policy makers tried to get a grip on the energy crisis, though the rate sensitive Japanese yen slipped to a new 24 year-low.

“That governments are working on price caps, support for the consumer and really trying to get a grip on the energy crisis helps set a floor on those two pairs,” said Samy Chaar, chief economist Lombard Odier

“Also, on the other side we have better news for the euro and cable from looking at the U.S. dollar. Maybe there is a bit less inflation pressure in the U.S. and so maybe we are at the start of the beginning of the Fed adjusting its strategy to stay at a restrictive level rather than hiking ever more.”

Britain’s incoming Prime Minister Liz Truss is considering a freeze on household energy bills to try to avert a winter cost-of-living crisis for millions of households, Reuters reported on Monday.

EU ministers will meet on Sept. 9 to discuss urgent bloc-wide measures to respond to a surge in gas and power prices that is hammering Europe’s industry and hiking household bills, after Russia curbed gas deliveries to the bloc.

Russia has halted gas flow along the Nord Stream 1 pipeline to Germany indefinitely, at first blaming an oil leak at a compressor station but since linking the stoppage to sanctions imposed by the west.

Elsewhere, the yen continued to tumble, with the dollar gaining 0.7% on the Japanese currency to 141.56 yen a new 24-year peak.

“After we saw the break of 140 (for dollar/yen) … the momentum definitely was skewed for yen weakness,” said Galvin Chia, an emerging markets strategist at NatWest Markets.

“So long as (yield curve control) is in play, and so long as interest rate divergence is in place, one of those side effects would be a weaker yen.”

The Bank of Japan is intervening in markets to keep yields on government bonds pinned down, which means the yen is sensitive to gains in yields elsewhere.

The Aussie was little changed after the Reserve Bank of Australia raised its cash rate by 50 basis points and was last down a touch at $0.6782.

The RBA board signalled further rate hikes to come but noted that it is not on a pre-set path.

Elsewhere in Asia, Chinese authorities have sought to slow the yuan’s recent depreciation and late on Monday cut the foreign exchange reserve requirement ratio (RRR), freeing up dollars for banks to sell.

The move had only a limited effect on the exchange rate, with the yuan slipping to a fresh two-year low of 6.9590 in offshore trade.