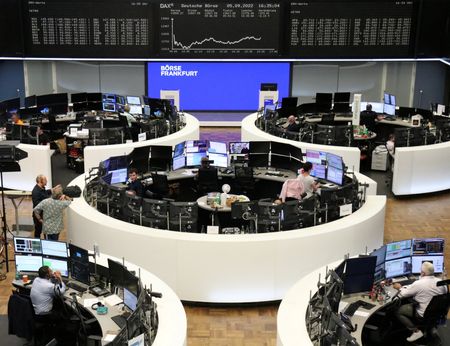 (Reuters) -European shares edged higher on Tuesday following a bleak start to the week on worries over a looming energy crisis and recession, while Credit Suisse Group rose after the Swiss bank agreed to sell its global trust business.

The continent-wide STOXX 600 index ticked up 0.2% after a 0.6% loss in the previous session as Russia stopped pumping gas via the Nord Stream 1 pipeline to Europe.

Germany’s DAX index crawled 0.1% higher after slumping more than 2% lower on Monday over rising concerns that Europe’s largest economy was heading for a recession.

Investors closely tracked the latest on the Nord Stream gas stoppage, which has sparked fears about surging energy prices and winter shortages in the region.

Multiple surveys on Monday showed that the euro zone is almost certainly entering a recession, as a deepening cost of living crisis and a gloomy outlook keep consumers wary of spending.

Separately, data showed German industrial orders fell 1.1% in July, down for the sixth month in a row as the war in Ukraine continues to take its toll.

Meanwhile, the European Central Bank is expected to deliver a large 75 basis-point interest rate hike to tame the surge in prices in its upcoming meeting on Thursday.

“The central bank (ECB) is expected to fire a monetary bazooka in the form of a 75-basis point rate increase. Indeed, with inflation hitting a record high in August… the central bank needs to employ all tools to tame rampant prices,” said Lukman Otunuga, senior research analyst at FXTM.

Volkswagen rose 1.9% on its decision to trigger an IPO of its sportscar brand Porsche, with chief executive Oliver Blume saying the listing could break the ice in capital markets.

Shares of Siemens Energy climbed 1.1% as it was set to rejoin the Germany’s premier DAX stock index, effective from Sept. 19.

(Reporting by Shreyashi Sanyal in Bengaluru; Editing by Sherry Jacob-Phillips and Sriraj Kalluvila)