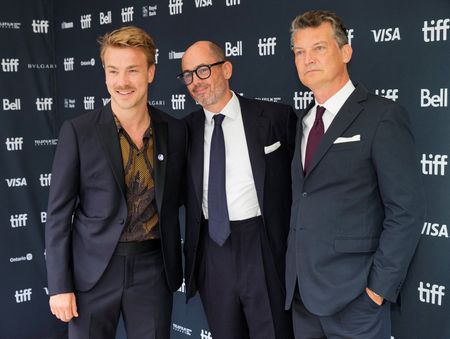 (Reuters) -German director Edward Berger said the world needed a reminder of the horrors of war as his remake of the anti-war classic “All Quiet On The Western Front” premiered at the 47th Toronto International Film Festival on Monday.

It is the first German cinematic treatment of the epic 1928 novel by German author Erich Maria Remarque, which depicts the devastation of World War One from the perspective of a German soldier and helped to change the narrative around the glorification of war.

Berger said he wants to share how the world wars started by his country have led to a collective generational scar on German society.

“I felt like it’s a singular perspective that might be interesting for other countries to watch,” Berger said at the film’s premier.

“Hopefully it helps to understand that nothing good can come from war. We all know it, but we seem to be forgetting it at every turn”.

“All Quiet on the Western Front” is a story about Paul Baumer who, driven by a misplaced sense of patriotic duty, lies about his age to fight for German forces in World War One, only to discover the horrors of being on the frontlines.

There are two movie adaptations of the book, the first one by American director Lewis Milestone released in 1930 went on to win an academy award. A second by another American director, Delbert Mann, appeared in 1979.

German actor Albrecht Schuch, who plays the character Stanislaus Katczinsky, said nothing he endured while making the film was comparable to the suffering of soldiers on a battlefield. For all those who fought, the war “led to their devastation for generations to come,” he said.

The filmmakers said that when they began filming it was a time when the EU was in danger of falling apart, America saw the resurgence of right-wing populism and Britain began its Brexit journey. “It felt like a timely thing to tell,” Berger explained.

“To bring back to our minds that nationalism or patriotism or division of countries doesn’t really lead to progress.”