Haaland is Man City hero vs. Fulham but De Bruyne gets 9/10 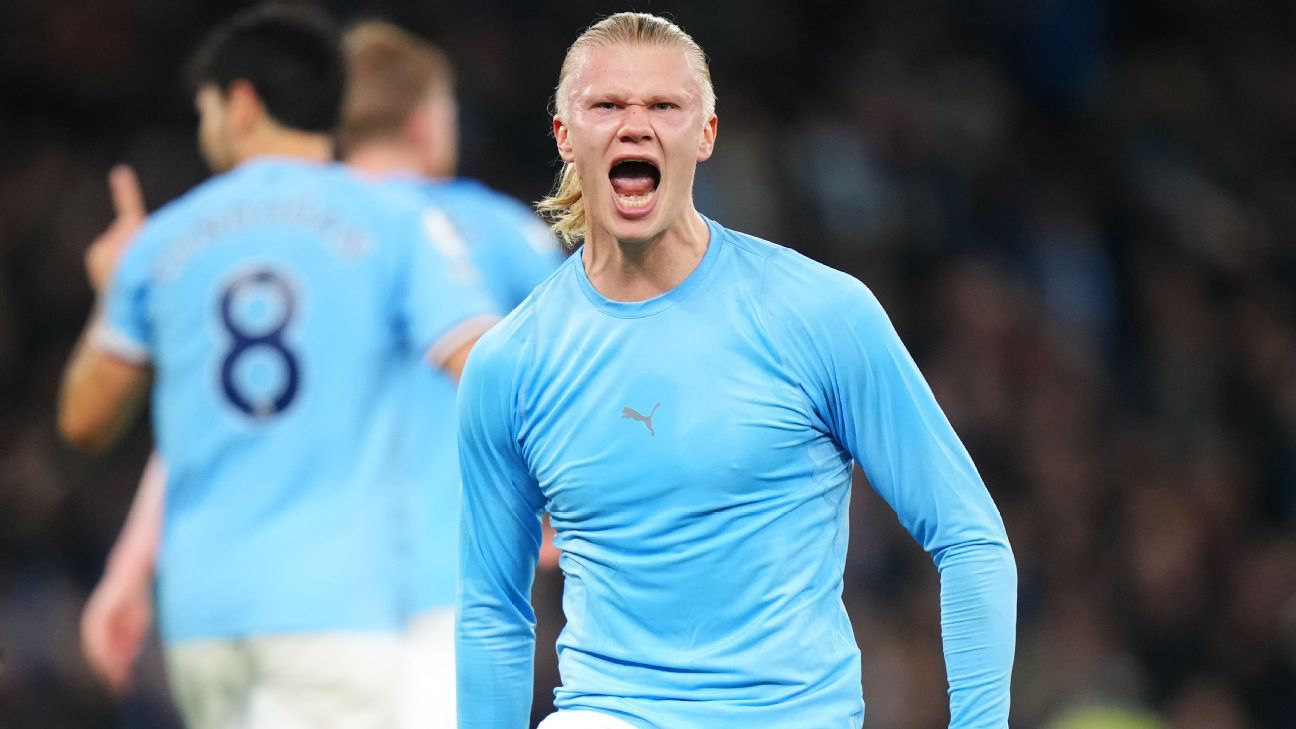 Manchester City went to the top of the Premier League table on Saturday but they left it late to secure a 2-1 win over Fulham at the Etihad Stadium.

It looked to be a typical day at the office for the Premier League champions when Ilkay Gundogan drove forward from midfield before playing in Julian Alvarez to open the scoring, but the mood at the Etihad Stadium changed when Joao Cancelo conceded a penalty and received a red card 10 minutes later. The spot kick was converted by Andreas Pereira, but despite the numerical advantage, it was the Citizens who maintained control of the game.

Kevin De Bruyne was Manchester City’s brightest in a match that required all of their championship calibre. The hosts thought they had taken the lead when the Belgium international connected with substitute Erling Haaland in the 75th minute — only for VAR to confirm he was marginally offside.

That looked to be City’s final chance of the game before De Bruyne then won a penalty in injury time. He left the duty to Haaland, who made no mistake in dispatching from 12 yards to earn an important three points for his side.

Pep Guardiola’s side ensured they kept control despite going down to 10 men early on, and they got their reward in the end. De Bruyne also looks to be in the sort of form that was crucial in helping them win the league title last season.

An unnecessary challenge from Cancelo made things difficult for his side, turning what looked like a routine afternoon into a proper day’s work for the rest of his teammates.

Pep Guardiola, 7 — Manchester City seemed to maintain control despite being a man down, and Guardiola didn’t panic as he made just two substitutions before injury time.

GK Ederson, 6 — There wasn’t a great deal for Ederson to do on the day as Fulham offered little by way of shots on target in open play.

DF Joao Cancelo, 3 — A sending off and penalty left his side with it all to do in a game that City were leading at the time he got his marching orders.

DF Nathan Ake, 6 — Forced to work hard as the opposition committed numbers forward on the counter-attack down the flanks and was often able to stand up to the challenge.

DF Manuel Akanji. 6 — Akanji could have done better with his chance close to half-time, when he directed a free header straight at Fulham goalkeeper Bernd Leno.

DF John Stones, 7 — Stretched the play regularly down the right flank with runs that were difficult for Fulham to pick up. A precise cross curving toward Haaland almost saw Stones pick up an assist, but the Norway international couldn’t get his effort on target.

MF Rodri, 7 — Showed more focus on his defensive duties after Cancelo was dismissed and helped maintain control for Manchester City in the middle of the pitch. Rarely made a wrong decision with passing and was quick to close down the danger to prevent play from developing in City’s third of the pitch.

MF Ilkay Gundogan, 7 — The Germany international controlled play well throughout the match, but his game was best defined by an excellent drive from midfield topped off with a precise pass to assist the opener. Picked out Haaland well in the second half with a headed nod-down.

MF Kevin De Bruyne, 9 — Manchester City’s regular talisman looked the most likely to make things happen from midfield as he remained at the heart of all promising attacking moves. Often able to unlock his more advanced players with precise passing into astute areas. Won the penalty in injury time to win the game.

FW Jack Grealish, 6 — Looked to make space down the channel before getting crosses into the box that never seemed to find their target. Two efforts on goal didn’t trouble the goalkeeper before he was replaced by Phil Foden.

FW Julian Alvarez, 7 — A powerful strike by Alvarez saw him put Manchester City into the lead after timing his run behind the defence to perfection. Replaced just after the hour mark by Haaland.

FW Bernardo Silva, 6 — Trickery on the right flank saw Silva make it difficult for his opponents to close him down, but the final ball wasn’t at his normal standard on the day.

Erling Haaland (Alvarez, 64′), 7 — Had the ball in the back of the net but VAR’s intervention found that he was marginally offside. Made no mistake with the penalty to seal the game with moments to spare.

Phil Foden (Grealish, 64′), 6 — Introduced just after the hour mark and played directly, though faced similar struggles to Grealish in trying to create opportunities from the flanks. Looked more impressive when combining in central areas.

Ruben Dias (Gundogan, 97′), N/R — Brought on to help see out the final seconds of the game.