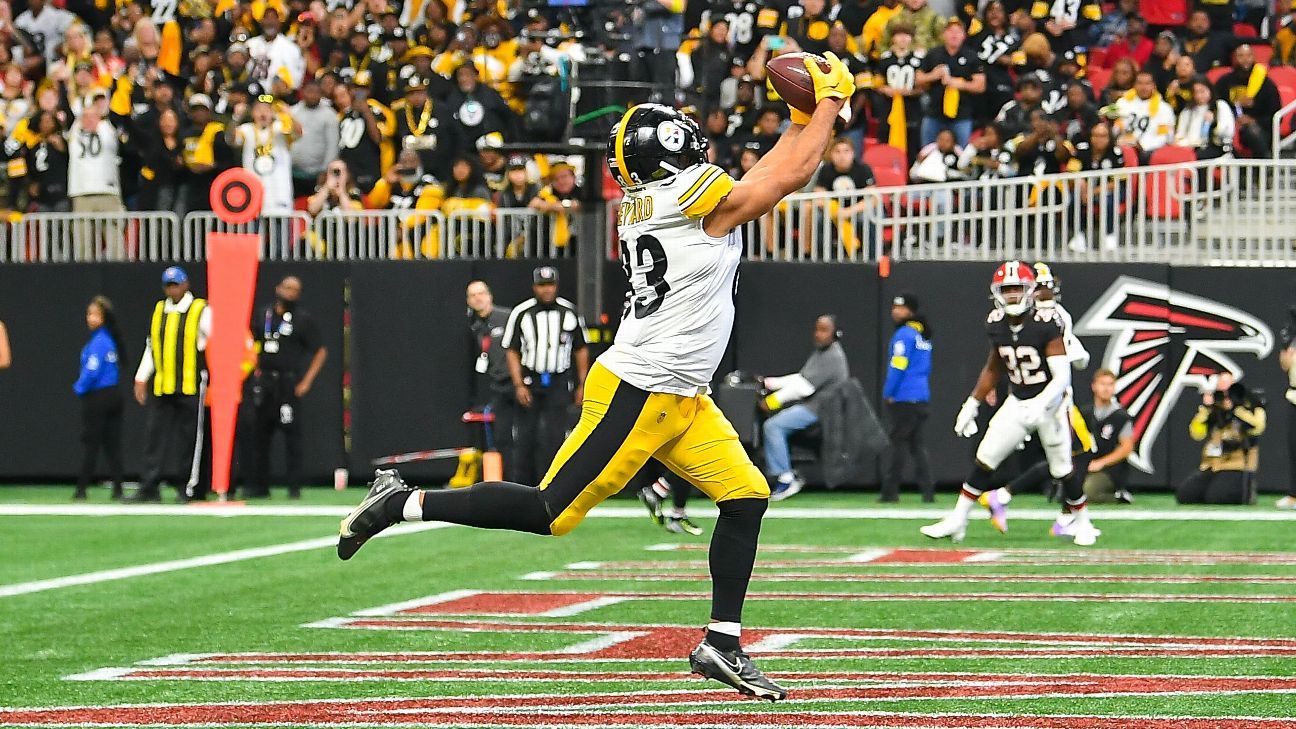 ATLANTA — Before heading to Mercedes-Benz Stadium on Sunday, Connor and Cameron Heyward made the 35-mile trip to Lawrenceville, Georgia to be close to their dad.

Together, the brothers — also Pittsburgh Steelers teammates — visited Craig “Ironhead” Heyward’s grave at Gwinnett Memorial Park where he was buried in 2006 after a long battle with cancer. Hours later, Connor scored his first career NFL touchdown at the home of the Atlanta Falcons, the same organization where his dad played for three seasons and rushed for a career-high 1,083 yards in 1995 — the last time a fullback had a 1,000-yard rushing season — and earned a Pro Bowl nod.

“I was pretty emotional when he got the touchdown,” said Cameron Heyward, wearing his dad’s old No. 34 Falcons jersey in the postgame press conference. “I don’t like to be Mr. Sap, but like that really hit me. Luckily there wasn’t a camera on me because I was a mess.”

Connor Heyward, 23, scored on a 17-yard pass from rookie quarterback Kenny Pickett in the second quarter as he got behind the defense deep in the end zone, hauling in the ball before he ran out of bounds. The touchdown also looked similar to his dad’s first in 1988 as a rookie with the New Orleans Saints.

Heyward’s touchdown gave the Steelers (5-7) a 13-3 lead and helped propel them to a 19-16 victory — their second consecutive. And it gave the rookie tight end a moment he’ll never forget in front of more than 30 friends and family who attended the game.

“It was everything,” he said of his catch. “It was really cool. The ball was in the air and my heart kind of dropped, like, ‘Oh, it’s coming to me.’ But just glad I made the play. Glad everybody, all the other 10 guys on that play did their job.”

Not only did Connor Heyward score Sunday, but Cameron Heyward recorded a sack. They’re the first pair of brothers to do that for the same team in a single game since sacks became an official statistic in 1982, according to the Elias Sports Bureau.

The brothers grew up outside Atlanta and went to Peachtree Ridge High School. Though their dad, who was just 39 when he died, went to Pitt, neither followed — but both still wound up playing football in the same city where their dad launched his football career. Connor Heyward, a decade younger than Cameron Heyward, was drafted by the Steelers in the sixth round of the 2022 NFL draft. Cameron Heyward was the organization’s first-round pick in 2011.

Before the Steelers took the field Sunday, Cameron Heyward talked to the team about the significance of the game for his family and about his dad’s legacy. It left a big impression on Pickett, a Pitt product like Craig Heyward.

“It was special, and Cam talked to the team before, and I talked to Connor,” Pickett said. “We were walking out to the tunnel, and I said we’re gonna get the win for his pops today. Connor to go out there and get his first touchdown in this building, it’s incredibly special. It’s not a coincidence. I think everything happens for a reason. Incredibly proud of him and really happy we got the win for both those guys.”