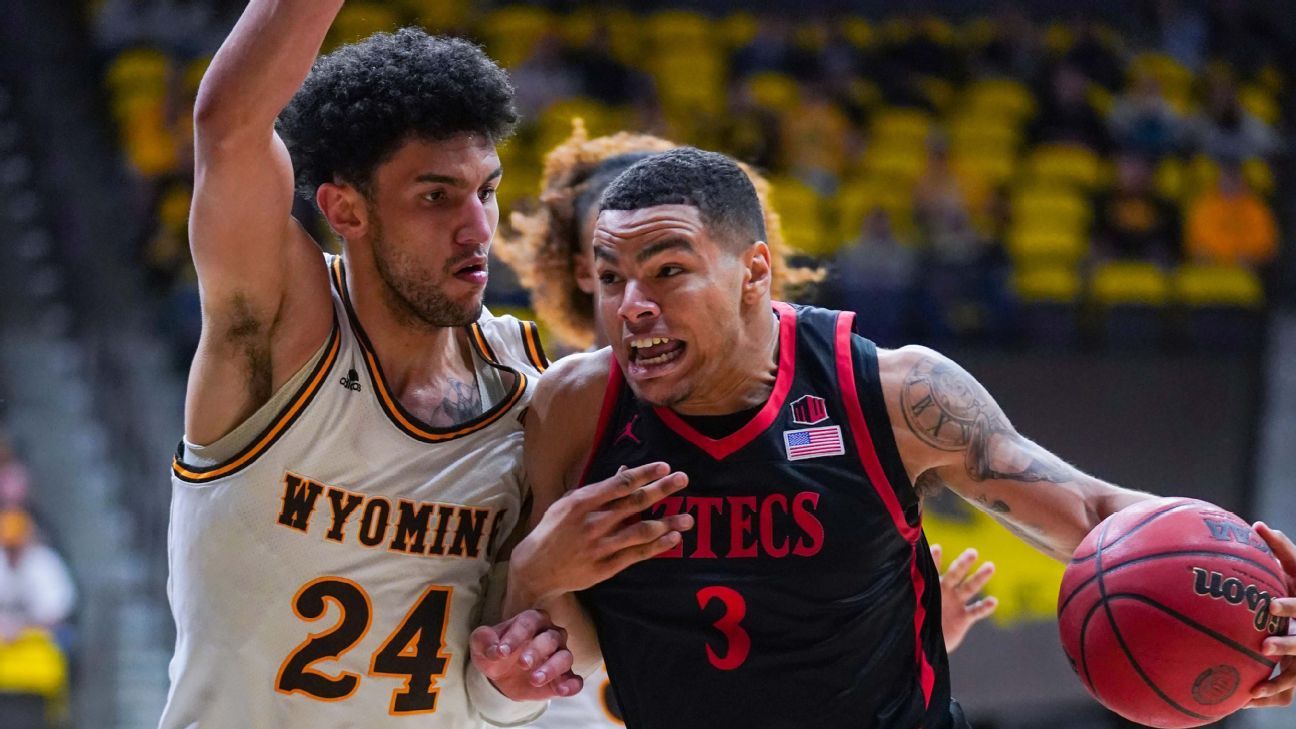 Last year’s breakout star in college basketball is back.

All the buzz, all the accolades, all the attention — it was all warranted — and frankly, all the many imitators are both understandable and mildly flattering. Indeed, KC’s Mid-Major Top 10 returns for another season of extreme excellence, highlighting the brightest stars and programs in college basketball beyond the purview of the narrow-scoped.

As a reminder, our definition of Mid-Majors excludes programs from the American, ACC, Big East, Big Ten, Big 12, Pac-12 and SEC, as well as Gonzaga Bulldogs. It includes, as we like to refer to them, the Power-25 conferences.

Heavy is the head that wears the most magnificently gilded crown in sports.

Brian Dutcher’s mail was re-routed to KC’s Top 10, given how much time the Aztecs spent in the P.O.R. (poll of record) last season, and there won’t be any change of address forms needed this season.

San Diego State returns four starters from a 23-9 team that earned an 8-seed in the NCAA Tournament as an at-large last season. Most notable among the returning group is reigning Mountain West Newcomer of the Year Matt Bradley, who averaged 16.9 PPG on 40% shooting from 3-point range. Nathan Mensah is the returning Mountain West Defensive Player of the Year and Darrion Trammell will be a major impact transfer after averaging 18.7 PPG over two seasons at Seattle.

The Aztecs ranked second in defensive efficiency last season per KenPom and, as is the case every year, that will be their identity again this year.

Early tests will come in the form of BYU and Stanford, and the murder hornets’ nest that is the Maui Invitational field. Still, for a team that figures to be regular in that other poll all season, the Aztecs start atop the game’s most consequential one.

Thousandths of a percentage point in the KC mid-major algorithm of excellence are all that stand between the Flyers and top billing in the Hope Diamond of mid-major preseason polls.

Anthony Grant’s team is loaded for bear again on the heels of a 24-11 season that included early wobbles, then consecutive wins over Miami (Elite 8), Kansas (National Champion) and Belmont (25 wins) in the ESPN Events Invitational in Orlando, then eventual trip to the NIT.

Circle an opening-round date with Wisconsin at the Battle 4 Atlantis — as well as a possible second-round tilt with Kansas — not to mention a mid-major steel-cage match against Wyoming in mid-December, as major résumé-building opportunities.

Perennial members of the most exclusive society in sports, the Gaels figure to maintain their Triple-Rhodium Club status in KC’s Mid-Major Top 10 this season, despite key departures. Tommy Kuhse and Matthias Tass no longer stroll the welcoming footpaths of Moraga, but Coach Randy Bennett has battle-tested replacements at his disposal.

Logan Johnson, the team’s top returning scorer, showed he’s poised for a breakout Fifth Year after pumping in a team-high 21 points in last season’s WCC Championship game loss to Gonzaga. Alex Ducas led the 2021-22 Gaels with 67 3s while shooting 39% from deep — and don’t be surprised if Augustas Marciulionis (son of NBA Hall of Famer Sarunas Marciulionis) becomes the program’s next steady point man.

The Pokes achieved mid-major enlightenment last season, earning an at-large bid to the NCAA Tournament a mere two years after winning just nine games. This season, an improvement on their 25-9 record seems as likely as a double-kicker after a spur to the hind quarters.

Graham Ike and Hunter Maldonado are back to, once again, form the best 1-2 combination in mid-major hoops. The duo averaged 38 PPG last season while finishing second in the conference in rebounding (Ike) and assists (Maldonado), respectively. Ike is the Mountain West Preseason Player of the Year.

Neutral-site mid-major non-conference bare-knuckle brawls with Dayton and Saint Mary’s are merely the undercard to the nightly no-holds barred fracas that is Mountain West play.

Much like the bottle service inside KC’s — the most exclusive joint this side of the 40/40 Club — guard play at the mid-major level is filled with top shelf brands. Max Abmas at Oral Roberts. Antoine Davis at Detroit-Mercy. Aaron Estrada at Hofstra. Darius McGhee at Liberty.

None are more decorated, nor dazzling, than UAB dynamo Jordan “Jelly” Walker: Conference USA’s reigning Player of the Year and the preseason favorite to win the award again this year. Second in D-I in made 3s last season (behind McGhee,) Walker led C-USA in scoring and finished third in assists, while also leading the Blazers to 27 wins, a conference championship and a trip to the NCAA Tournament.

Andy Kennedy’s squad returns serious length up front in KJ Buffen and Trey Jemison, while LSU transfer Eric Gaines is one of the most impactful defenders in college hoops.

Excitement around this Billikens team must be tempered, but it’s awfully hard not to imagine what could be if things play out as Coach Travis Ford dreams. Saint Louis returns the nation’s top assist man in Yuri Collins, a dime dropper who set a school record with 19 in a win over Boston College last season. Collins is an NBA-ready point guard who can also get his — see his 35-point performance against George Mason, which included the game-winner in 2OT.

Still, make no mistake, all eyes will focus on the return of Javonte Perkins, SLU’s top scorer two seasons ago (17.1 PPG) who missed all of last season with a torn ACL.

World-class standing on the guest list of Studio KC awaits a Saint Louis team that must navigate a hellacious non-conference slate (vs. Memphis, at Auburn, at Iona, vs. Boise State, vs. Drake) before dealing with the hellacious challenge of A-10 play. Saddle up.

A profane social media post leading to the suspension of four players prior to the MAC Championship game — which ended in a 20-point loss at the hands of Akron — was not the way anyone drew it up. Coach Rob Senderoff called his player’s actions “really, really, really dumb.”

No one is excusing, or running, from what happened.

But it’s also time to remember what an incredible season Kent State put together: a 12-game win streak (longest for the program in 20 years), 23-11 record, MAC Coach of the Year honors for Senderoff and the evolution of Sincere Carry, the best player non-KC disciples have never heard of.

Carry averaged 17.9 points and better than 4.5 assists and rebounds per game last year, and has a chance to do what only three men, including Ron Harper and Gary Trent have done: win MAC Player of the Year twice.

Gio Santiago and Malique Jacobs — who combined for better than 30% of the Flashes’ scoring last season — should take on even greater roles in 2022-23.

And visits to preseason No. 3 Houston and No. 2 Gonzaga will sharpen iron in Kent, Ohio.

There’s unfinished business along the banks of the Cuyahoga.

No town has embraced this poll, our mission or our world-class credentials quite like Des Moines. The heartfelt connection with the upstanding folks of the “Hartford of the West” is a testament to a shared respect of basketball IQ, mid-major basketball IQ and what separates the KC brand from all imposters.

Which is why we’re tickled to include Drake among the VIPs inside our elegant velvet ropes.

Coach Darian DeVries and company are the preseason favorites to win the re-structured Missouri Valley Conference, thanks in part to what’s expected from Tucker DeVries. The coach’s son, reigning MVC Freshman of the Year and preseason Player of the Year, could blossom into a superstar in Year Two — which is saying something, considering he led Drake in scoring last season.

Steady veteran Roman Penn played through a fractured foot last year and should return to the form that saw him lead the Valley in assists as a sophomore and junior. Gas up the RV for roadies to Richmond and Saint Louis as early-season Christmas presents to yourself. You’ve earned it.

The snooty Power-5 parvenus view The SoCon as one of the “hidden gems” in the game. But ask them about the difference between a Keydet and a Catamount, and watch them get exposed faster than an exhibitionist.

True diehards like us know this league is outstanding. So when a Furman team that came this close to an NCAA Tournament bid last season is voted preseason favorites, it resonates.

The Paladins are for real, for real.

An early-season run with Belmont, not to mention the Charleston Classic and a visit to NC State, will serve as sparring rounds before nightly phone booth fights in the SoCon. Let’s get it on.

The city that gave us Anita Baker, Chicago Bears head coach Matt Eberflus and Klinger from “M.A.S.H.” provides us our #10 team in the Transcendent Ten, Toledo.

Coach Tod Kowalczyk’s club has been the Menace of the MAC each of the past two regular seasons, combining to go 32-7 in league play, including last year’s 17-3 run.

Numerous mentions in last year’s Column of Ultra-Brilliance helped alert the Golden State Warriors to the talents of Ryan Rollins, whom the Dubs drafted in the second round. How the Rockets fill his void will determine whether they three-peat as regular season champs.

Seth Millner and JT Shumate return, both seniors, both coming off years in which they averaged 15 PPG. RayJ Dennis and Ra’Heim Moss are back to lead one of the more experienced backcourts in major mid-major ball, while transfer portal additions should provide Coach Kowalczyk much needed depth. Nothing will be complete until the Rockets cut down the nets in the MAC Tournament, but cutting out this inclusion in the KC Top 10 for prominent display on ice boxes across northern Ohio is a tremendous runner-up.