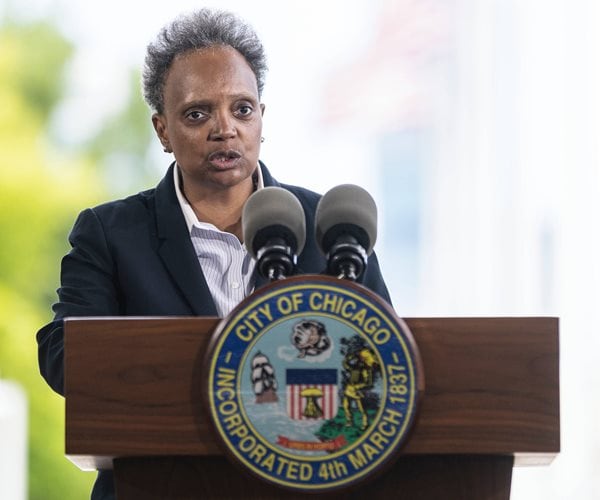 Chicago Mayor Lori Lightfoot on Sunday said it was “simply a mistake” for her reelection campaign to request public schools teachers “share” with their students the opportunity to work on Lightfoot’s campaign for “class credit.”

During her appearance on “The Sunday Show with Jonathan Capehart,” Lightfoot said that in light of the Chicago mayoral election slated for Feb. 28, “one of our staffers reached out through publicly available information to [Chicago Public Schools] teachers and our city colleges. And that was just simply a mistake.”

On Thursday, during a press conference, Lightfoot made her first public comments about the emails, saying: “As soon as I learned about the outreach to the CPS teachers, we put a stop to it. The bottom line here is it was clearly a mistake, and we’ve made sure that we emphasize that, not only to the staffer involved, but everybody on our campaign, to ensure this kind of conduct doesn’t happen again.”

During the press conference, Lightfoot maintained that there were no city resources spent on the emails and that there was no coercion involved.

But according to the American Civil Liberties Union of Illinois, the emails may have violated federal law.

“The Lightfoot campaign’s email to Chicago Public School teachers urging them to offer extra credit to students as an incentive to volunteer on the mayor’s reelection campaign is inappropriately coercive and raises First Amendment concerns,” ACLU of Illinois executive director Colleen Connell stated. “The Supreme Court has made clear that government officials cannot use their office or power to coerce participation or to punish for lack of participation in political campaigns. Federal courts affirmed that principle in an ACLU of Illinois case [O’Hare Truck Service, Incorporated v. City of Northlake].”

“My name is Megan Crane, and I work on Mayor Lightfoot’s re-election campaign. As the race heats up, we’re looking to enrich our office through what we call our externship program. Could you please share this opportunity with your students? I’ve included more information below:

“Lightfoot for Chicago is seeking resumes from any volunteer interested in campaign politics and eager to gain experience in the field. The ideal volunteer will be efficient, well organized and enthusiastic about joining a dynamic team. A strong commitment to Democratic ideals is essential. Folks can apply through this form.

“Externs are expected to devote 12hrs/wk to the campaign. Students are eligible to earn class credit through our volunteer program.

“Volunteers will join an experienced team of staff and consultants, providing a unique opportunity to learn the field, finance, and communications aspects of a campaign. Volunteer tasks include voter contact, attending events, and more. We are very flexible with student schedules.

“No prior campaign experience is required, nor is a major or minor in political science. We’re simply looking for enthusiastic, curious and hardworking young people eager to help Mayor Lightfoot win this spring.”

During her 2019 bid for Chicago mayor, Lightfoot ran on a campaign, according to WTTW, to root out corruption at City Hall and break the city’s “corrupt political machine.”