Mark Levin suggests that for Democrats, this election is about tearing the country apart 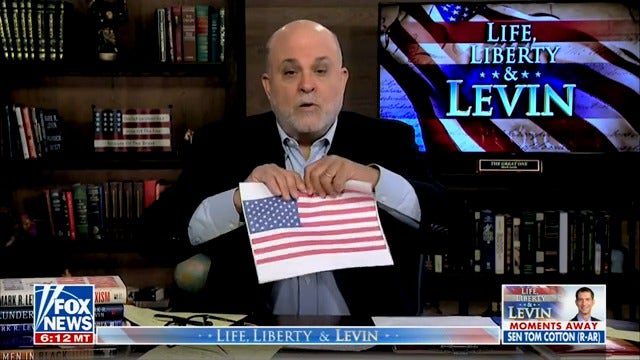 Fox News host Mark Levin said during his monologue on “Life, Liberty & Levin” how divided the country has become over the most basic beliefs its citizens once shared.

“Why are we divided? Let’s see why we’re divided. What do the Democrats stand for and what do they oppose?” he asked.

He recalled how issues such as the nuclear family and the Constitution of the United States are now considered partisan topics and claimed the liberals have demonized those issues.

Life, Liberty, and Levin host Mark Levin had a monologue suggesting all the ways that the Democratic Party has torn apart American institutions and fundamental beliefs.

“American history, the country was actually started not in 1776 with revolution but 1619. Who says? The ‘New York Times’ and it’s reprobates, so forget about these conventions, forget about the second continental Congress forget about the constitutional convention. We believe in them, they do not,” he said of Democrats. “George Washington, one of the greatest statesmen to ever live, they dismiss him as a White slave owner, we embrace him for what he did for country.”

He later warned that critical institutions from the military to public classrooms have become laboratories for woke indoctrination.

“The United States military. We can’t get our recruitment up, why? Because they’ve turned it to a woke experiment. They are undermining our ability to defend ourselves, and they are underfunding the military. We support the military. They do not,” he warned. “What about the classrooms? What is going on in our classrooms? Feeding disgusting pornography to our children in our libraries? You know, a lot of its so disgusting that parents can’t even read it in front of school boards.”

He then specified that critical race theory is one form of curriculum that is “trying to turn our children into racists and destroy American history.” Parents, he observed, are told to “butt out” as scores have dropped and school is re-purposed as “an indoctrination mill.”

LAWMAKERS SOUND ALARM OVER U.S. MILITARY RECRUITMENT CRISIS: ‘WHY WOULD I JOIN?’

Angry parents and community members protest after a Loudoun County School Board meeting was halted by the school board because the crowd refused to quiet down, in Ashburn, Virginia, U.S.  June 22, 2021.
(REUTERS/Evelyn Hockstein)

Levin continued on about how the United States needs strong borders in order to survive as a nation.

“That is United States of America, it’s a big globe out there,” he said as he held up an image of the North American continent on the globe. “There’s over 190 countries. There is almost 8 billion people on the face of the Earth. See this? See the outline? Those are American borders, this is American sovereignty. No nation could have a massive welfare state and an open border. Milton Friedman said that half a century ago, and he was right. We’re being overrun with foreigners, that doesn’t mean we’re not humane because we think we ought to have a secure border. It means we believe in survival.”

He returned to his main point by suggesting that the upcoming midterm is a referendum on the American nation itself and whether it shall be ruled by radicals.

Meanwhile, he suggested the Democrats have a very different view.

“The Democrat Party does not believe that they believe that America is too good, too big, too powerful, and they are destroying us from within. They don’t even like the American flag. We do,” he said. “Many of us have relatives who went to war carrying that flag. Now, it should be clear by now what this election is about, every one of their candidates is a radical, every single one.”

Alexander Hall is an associate editor for Fox News Digital. Story tips can be sent to Alexander.hall@fox.com.