Marketmind: Powell to the people 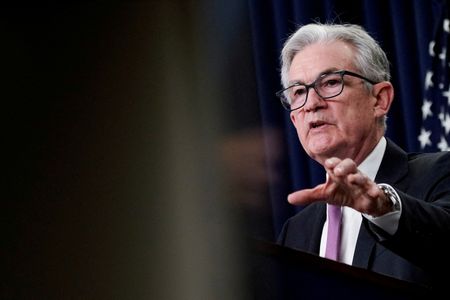 The waiting is almost over.

U.S. Federal Reserve Chair Jerome Powell delivers his Jackson Hole speech on the economic outlook on Friday, which will give direction to every financial market in the near term, and set the tone until the Fed’s September 20-21 policy meeting.

A flurry of Fed officials on Thursday shared their thoughts on the economy, inflation and interest rates, the most notable market impact of which was a bull-flattening U.S. yield curve to its most inverted in a week.

Wall Street also recovered a bit more ground. The Nasdaq’s rise of around 1.5% was also helped by a 6% jump in Hong Kong’s tech index overnight, the biggest rise in almost four months during market talk that Sino-U.S. audit discussions have made progress.

Fresh stimulus measures from Beijing to help support China’s creaking economy, while not on a game-changing scale, will boost local sentiment, at least temporarily.

But there is only one game in town – Powell’s speech at the Kansas City Fed’s annual policy symposium in Wyoming. How hawkish will he be? Will he hint at a policy pivot?

On the Asian corporate front, the most keenly-awaited event on Friday is Chinese property developer Longfor Group Holdings half yearly results. The property sector is in trouble, and sources told Reuters earlier this month that state-owned China Bond Insurance Co Ltd was asked to guarantee Longfor’s bond issues.

Japanese inflation is expected to rise to a fresh eight-year high of 2.5% in August from 2.3%, putting further pressure on the Bank of Japan’s policy of buying unlimited quantities of government bonds to cap the 10-year yield at 0.25%.

If and when inflation tops 2.8%, it will be the highest since the peak of Japan’s boom in the early 1990s.

Other key developments that should provide more direction to markets on Friday: