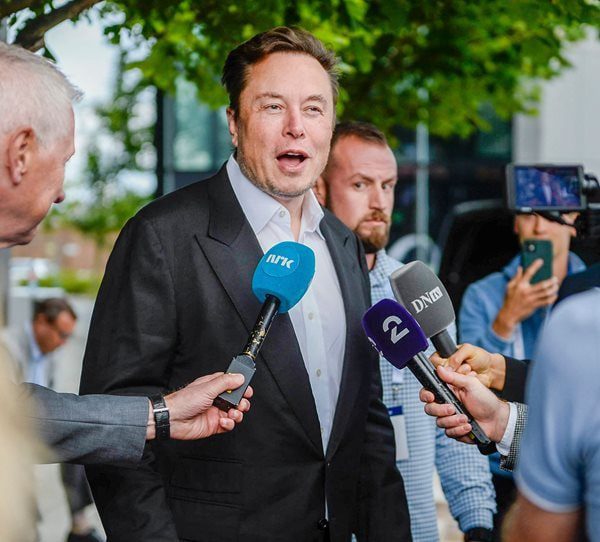 Elon Musk arrived at Twitter Inc.’s San Francisco office on Wednesday, days ahead of a court-ordered deadline to close his $44 billion deal for the social media platform.

Musk told Twitter employees that despite recent reports, he will not cut 75% of the staff, Bloomberg reports, citing people familiar with the matter. However, Twitter workers do expect Musk to make at least some cuts after he closes on the deal, scheduled for Friday.

Musk also reverted to some of the antics for which the bombastic billionarie is famous. “Entering Twitter HQ – let that sink in!” said the caption of a video that Musk tweeted in which he was walking into the Twitter office lugging a sink.

Hours earlier, he hinted at being the company’s top boss after updating his profile’s bio to “Chief Twit.”

The Wall Street Journal reported, citing people familiar with the matter, that banks have started to send $13 billion in cash backing Musk’s takeover of Twitter in a sign the deal is on track to close by the end of the week.

Once final closing conditions are met, the funds will be made available for Musk to execute the transaction by the Friday deadline, the report added.

Morgan Stanley, Barclays and Bank of America did not respond to Reuters requests for comment on the WSJ report.

In the six months of dramatic back-and-forth since Musk announced his $54.20 per share bid, Twitter initially resisted the deal by adopting a poison pill and later sued the world’s richest man after he announced plans to abandon the offer on concerns about spam accounts on the platform.

Earlier this month, Musk proposed to proceed with his original $44 billion bid, calling for an end to the lawsuit by Twitter.

The Tesla Inc CEO notified co-investors who committed to help fund the Twitter deal he plans to close it by Friday, Reuters reported Tuesday.

Equity investors including Sequoia Capital, Binance, Qatar Investment Authority and others have received the requisite paperwork for the financing commitment from Musk’s lawyers, Reuters reported.

Twitter shares were up about 1.1% at $53.91 in extended trading, slightly below Musk’s offer price.

Robert Anderson, a law professor at Pepperdine University, said he fully expects the deal to close by Friday’s deadline but did not see much substance to Musk’s video.

“I don’t see anything unusual about it, other than that he brought a sink,” he said.

Musk had been expected to visit Twitter this week and is expected to return again Friday if the deal is finalized, according to an internal memo cited in a report by Bloomberg News.

The Washington Post reported last week that Musk told prospective investors that he plans to cut three quarters of Twitter’s 7,500 workers when he becomes owner of the company. The newspaper cited documents and unnamed sources familiar with the deliberation. Several hours after posting his sink video, Musk tweeted that he was meeting “a lot of cool people at Twitter today!” He gave no details.

One of Musk’s biggest obstacles to closing the deal was keeping in place the financing pledged roughly six months ago.

A group of banks, including Morgan Stanley and Bank of America, signed on earlier this year to loan $12.5 billion of the money Musk needed to buy Twitter and take it private. Solid contracts with Musk bound the banks to the financing, although changes in the economy and debt markets since April have likely made the terms less attractive. Musk even said his investment group would be buying Twitter for more than it’s worth.

Less clear is what is happening with the billions of dollars pledged to Musk by investors who would get ownership stakes in Twitter. Musk’s original slate of equity partners included an array of partners ranging from the billionaire’s tech world friends with like-minded ideas about Twitter’s future, such as Oracle co-founder Larry Ellison, to funds controlled by Middle Eastern royalty.

The more equity investors kick in for the deal, the less Musk has to pay on his own. Most of his wealth is tied up in shares of Tesla, the electric car company that he runs. Since April, he has sold more than $15 billion worth of Tesla stock, presumably to pay his share. More sales could be coming.

Musk, 51, has shared few concrete details about his plans for the social media platform. While he’s touted free speech and derided spam bots since agreeing to buy the company in April, what he actually wants to do about either remains a mystery.

Technology analysts have speculated that Musk wants to use Twitter to help create an “everything app” similar to China’s WeChat service, which allows users to do video chats, message, stream video, scan bar codes and make payments.

Musk’s flirtation with buying Twitter appeared to begin in late March. That’s when Twitter said he contacted members of its board — including co-founder Jack Dorsey — and told them he was buying up shares and was interested in either joining the board, taking Twitter private or starting a competitor.

Then, April 4, he revealed in a regulatory filing that he had become the company’s largest shareholder after acquiring a 9% stake worth about $3 billion.

At first, Twitter offered Musk a seat on its board. But six days later, CEO Parag Agrawal tweeted that Musk would not be joining the board after all. His bid to buy the company quickly followed.

Inside Twitter, Musk’s offer was met with confusion and falling morale, especially after Musk publicly criticized one of Twitter’s top lawyers involved in content-moderation decisions.

In July, Musk abruptly reversed course, announcing that he was abandoning his bid to buy Twitter. His stated reason: Twitter hadn’t been straightforward about its problem with fake accounts he dubbed “spam bots.” Twitter sued, and two weeks before a 5-day trial was scheduled to begin, Musk changed his mind again, saying that he wanted to complete the deal after all.

Information from The Associated Press was used in this report.