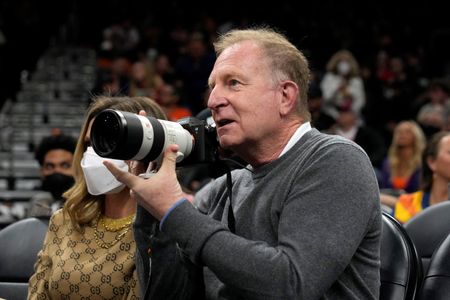 (Reuters) -Phoenix Suns owner Robert Sarver was suspended for one year and fined $10 million by the National Basketball Association (NBA) on Tuesday following an independent investigation into allegations over workplace misconduct.

The investigation found that Sarver, who bought the Suns and WNBA’s Phoenix Mercury in 2004, engaged in inequitable conduct toward female employees, including “sex-related comments” and inappropriate remarks on female employees’ appearances.

Sarver, who cooperated fully with the investigation process, was also found to have used a racial slur on at least five occasions “when recounting the statements of others.”

“The statements and conduct described in the findings of the independent investigation are troubling and disappointing,” NBA Commissioner Adam Silver said in a statement.

“We believe the outcome is the right one, taking into account all the facts, circumstances and context brought to light by the comprehensive investigation of this 18-year period and our commitment to upholding proper standards in NBA workplaces.”

The NBA commissioned its investigation following an ESPN article in November 2021 that detailed allegations of racism and misogyny during Sarver’s tenure. Sarver denied the allegations and said he welcomed an investigation.

The Suns did not immediately reply on Tuesday when asked to comment.

As a result of his suspension, Sarver cannot be present at any NBA or WNBA team facility, have any involvement with the business or basketball operations of either club nor attend or participate in meetings of either league’s board.

During his suspension, Sarver must also complete a training program focused on respect and appropriate conduct in the workplace.

“Regardless of position, power or intent, we all need to recognize the corrosive and hurtful impact of racially insensitive and demeaning language and behavior,” said Silver.

“On behalf of the entire NBA, I apologize to all of those impacted by the misconduct outlined in the investigators’ report. We must do better.”

The investigation also substantiated instances of workplace misconduct by Suns employees that were not directly related to Sarver and a lack of proper organizational policies and controls.

Among other things, the investigation found instances of racial insensitivity, mistreatment of female employees, inappropriate commentary related to sex or sexual orientation, and disrespectful communications.

The investigation also concluded that the Suns’ human resources function was historically ineffective and not a trusted resource for employees who were subjected to acts of improper workplace conduct.

Most of the Suns employees who engaged in these acts of misconduct over the 18-year period of investigation are no longer employed by the organization.

The investigation included interviews with 320 current and former employees and Sarver as well as the evaluation of over 80,000 documents and other materials, including emails and text messages and video.

(Reporting by Frank Pingue in Toronto; Editing by Ken Ferris)