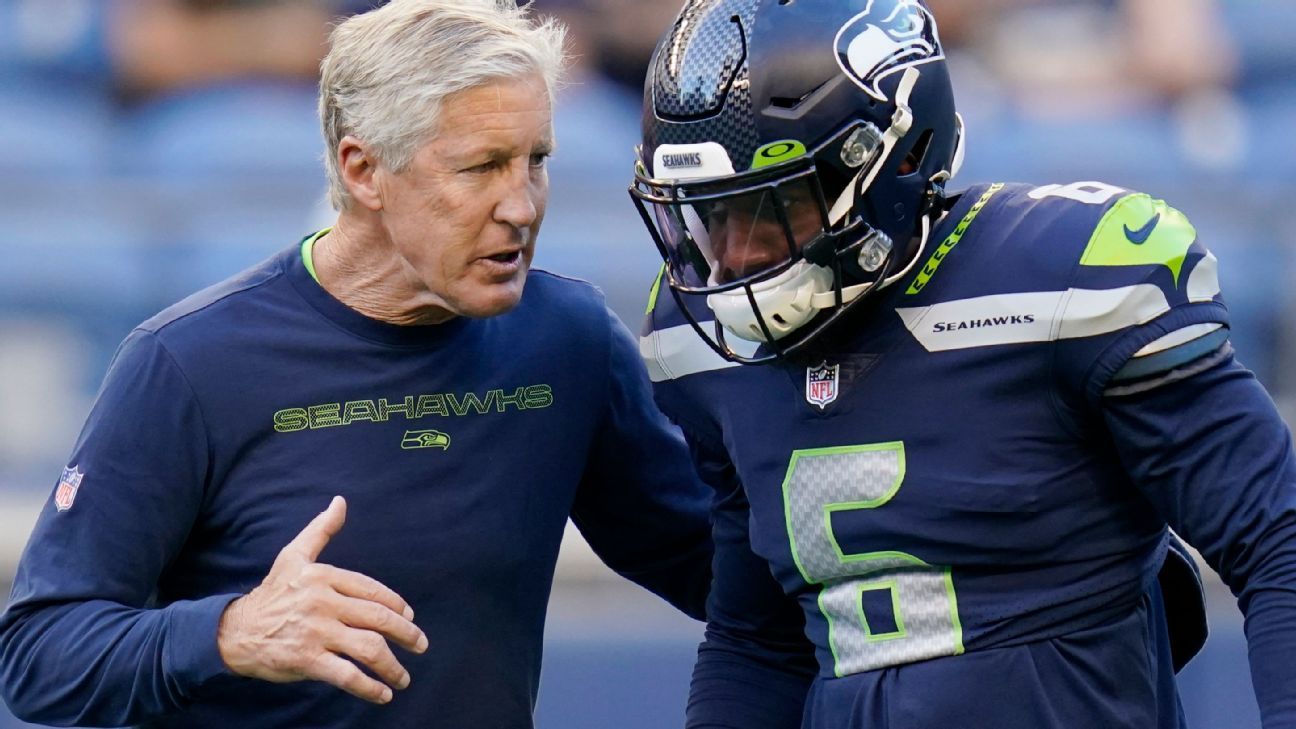 RENTON, Wash. — Seattle Seahawks coach Pete Carroll and safety Quandre Diggs on Wednesday said they’d like to see a close reexamination of whether NFL stadiums should exclusively use natural grass.

The ongoing conversation about the safety of playing on artificial turf versus natural grass has been raised anew after Seahawks wide receiver DK Metcalf and Los Angeles Chargers cornerback J.C. Jackson suffered knee injuries during Sunday’s game at SoFi Stadium, both on noncontact plays.

SoFi Stadium, home of the Chargers and the Rams, uses an artificial surface.

Fourteen of the NFL’s 30 stadiums use an artificial surface, including the Seahawks’ Lumen Field. In September 2020, NFL Players Association president JC Tretter called for all teams to use grass fields to reduce the risk of injury to players. Tretter cited NFL injury data from 2012 to 2018 that showed a 28% higher rate of noncontact lower-extremity injuries on artificial turf as compared to grass.

“I know that there’s numbers and there’s studies,” Carroll said. “You’ve got to figure out who the study comes from and who’s paying for it. There’s a lot of stuff here that we’ve got to figure out. We’ve got to do the right thing, but we definitely need to keep looking at it, because every now and then, it just feels like something is up, too many guys going down when they’re not even touching anybody. So we’ll see. The turfs are way better than they used to be and all that kind of stuff, but we’ve just got to see.”

Jackson will miss the rest of the season after rupturing the patellar tendon in his right knee on Sunday.

Metcalf suffered a much less severe injury to his left patellar tendon that won’t require surgery. Carroll said Metcalf was feeling “a little better” on Wednesday and was at the Seahawks’ morning walk-through but that he wouldn’t take part in their afternoon practice. Metcalf’s status for Sunday’s home game against the New York Giants remains up in the air.

Tretter’s 2020 call for all teams to use natural grass came after San Francisco 49ers coach Kyle Shanahan complained about the artificial turf at MetLife Stadium, where standout Niners defensive end Nick Bosa had recently suffered a season-ending knee injury while playing against the New York Jets.

Diggs cited those injuries and the ones on Sunday at SoFi Stadium while expressing his dislike for artificial turf, which he said is firmer and has less give than grass.

“So you see that and you just kind of wonder why can’t we have natural grass everywhere,” Diggs said. “I love playing in San Francisco and things like that where it’s grass and you just go out there and you just go play. Hopefully, we’re doing some research on it and seeing what we can do to make things better.”

Diggs said grass is “so much better” but acknowledged that players suffer injuries on grass, as well, including his own dislocated ankle and broken fibula last season at the Arizona Cardinals’ State Farm Stadium. Diggs said there is variance between the turfs at different stadiums, describing SoFi Stadium’s as slick and Lumen Field’s as “fine” but “a little more sticky than others.” He said his foot got stuck in the turf on a missed tackle two weeks ago in a home game against the Cardinals.

“I know it’s hard to upkeep grass, but at the end of the day, we’ve got to do what’s best for this billion-dollar industry, and I think the players are a big part of that,” Diggs said. “So maybe we can take some ideas from the players.”