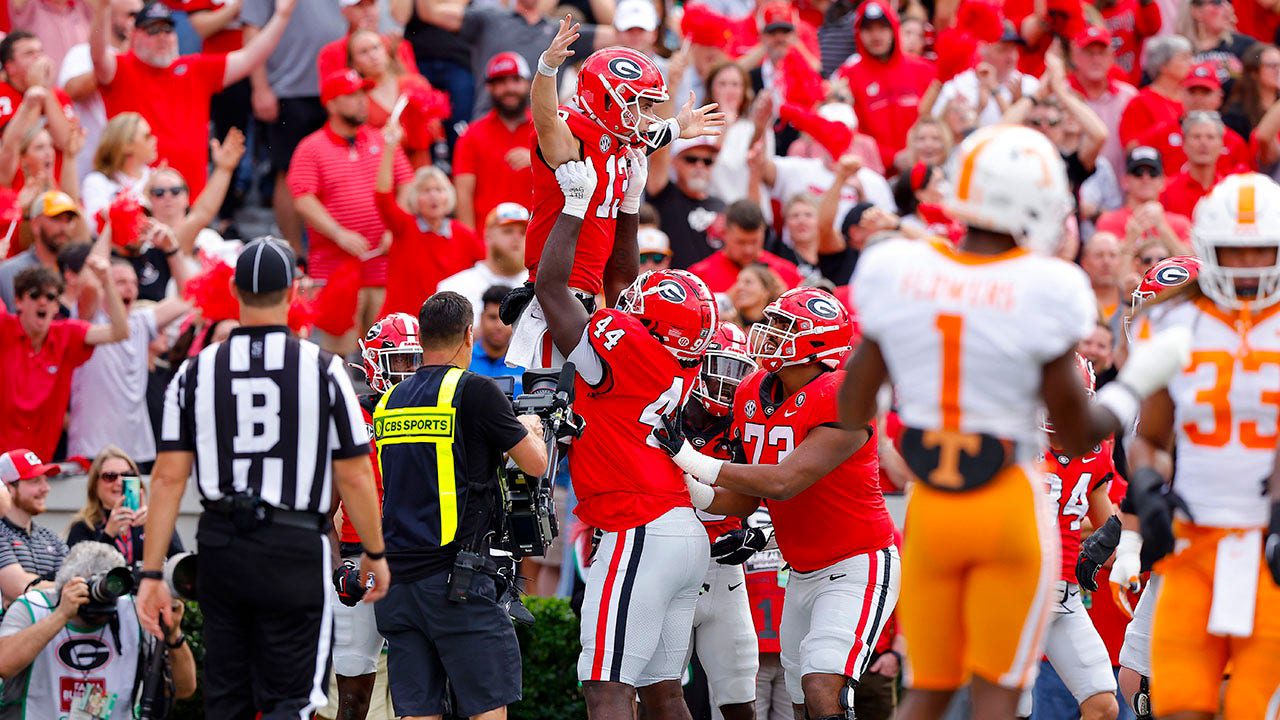 Stetson Bennett tossed two touchdown passes and added one on the ground.

Georgia’s defense shut down Tennessee’s high-powered offense in front of a crowd of over 92,000, which included legendary Volunteers quarterback and Pro Football Hall of Famer Peyton Manning.

Stetson Bennett (13) of the Georgia Bulldogs celebrates with teammates after scoring a touchdown against the Tennessee Volunteers during the first quarter at Sanford Stadium Nov. 5, 2022, in Athens, Ga.
(Todd Kirkland/Getty Images)

Tennessee was not able to muster a touchdown until late in the fourth quarter.

Hendon Hooker entered the game as a favorite in the Heisman race, but his chances of winning that trophy likely took a hit after he passed for less than 200 yards with no touchdown passes and one interception.

It was a far cry from Hooker’s sensational five-touchdown performance in the Vols’ thrilling win over the Alabama Crimson Tide in October.

Tennessee’s offensive line struggled from start to finish on Saturday, and Hooker was sacked six times.

Hendon Hooker (5) of the Tennessee Volunteers looks to pass against the Georgia Bulldogs during the fourth quarter at Sanford Stadium Nov. 5, 2022, in Athens, Ga.
(Todd Kirkland/Getty Images)

Hooker was also responsible for lost a fumble that nearly resulted in a safety for Georgia. In the Volunteers’ last possession, Hooker dropped back and attempted to run on fourth down but came up short.

The convincing victory by Georgia will likely result in the Bulldogs jumping up from their No. 3 spot in next week’s College Football Playoff rankings.

Hooker and his potent top receivers, Hyatt and Cedric Tillman, were contained by Georgia. The Vols were held to two first-half field goals as Georgia took a 24-6 halftime lead. Rain in the second half only made it more difficult to move against the Bulldogs’ defense.

Bennett threw scoring passes of 37 yards to Ladd McConkey and 5 yards to Marcus Rosemy-Jacksaint in the first half. Bennett added a 13-yard scoring run.

Georgia’s passing attack featured some big plays against Tennessee’s secondary. Bennett had completions of 52 yards to Arian Smith and 49 yards to running back Kenny McIntosh.

Georgia will travel to Starkville to play Mississippi State Nov. 12. Georgia has won three consecutive games in that series.

Chantz Martin is a sports writer for Fox News Digital.