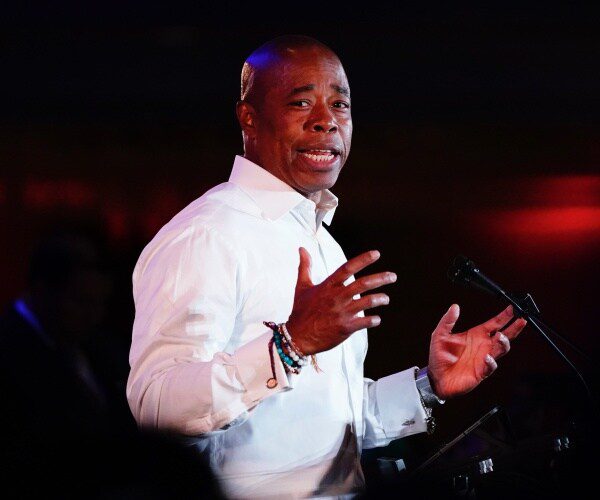 Calling the lack of a federal response to the border crisis “inhumane” and “irresponsible,” New York City Democrat Mayor Eric Adams submitted an emergency aid request to the state on Friday, saying the cost of caring for migrants from the U.S.-Mexico border could soon hit $2 billion.

During an appearance Friday on Caribbean Power Jam Radio, Adams said the massive influx of asylum seekers is pushing city services to the brink and creating difficult budgetary conditions.

“The strain on our infrastructure is immense,” he said. “I cannot tell you how much of an impact this is having on our abilities to provide services for everyday New Yorkers.”

Approximately 40,000 migrants have traveled to New York City since last year, with the majority needing housing, social services and education, Politico reports. According to figures from City Hall, more than 3,000 migrants arrived in the past week alone, with a record 835 people entering the five boroughs on a single day.

Compounding Adams’ problem is Colorado Democrat Gov. Jared Polis’ decision to bus migrants to New York City and Chicago in the wake of a travel backlog due to winter storms. Polis has since stopped sending migrants east after Adams and Chicago Democrat Mayor Lori Lightfoot criticized the move.

With close to 70,000 people staying in New York City’s shelters on any given night, the system is at capacity; Adams said Friday that between homeless New Yorkers and the surge of migrants, more than 100,000 people are expected to be in the city’s care.

Public schools have also absorbed 11,000 migrant children into the system, according to Politico.

Adams estimated the cost of these services to be between $1.5 billion to $2 billion and cautioned that, in the absence of state aid, the financial strain will be felt in other areas of the city budget.

“We are going to see an impact on every service we have in the city, and that is just inhumane on the part of the national government,” Adams said on the radio show. “It’s irresponsible that we have not had a real national response to what’s happening on our border.”

According to Politico, the city had spent $366 million on caring for the new migrant arrivals as of December and had received $8 million from the Federal Emergency Management Agency. Another $2 million came from Senate Majority Leader Chuck Schumer, D-N.Y.

“We are at our breaking point,” Adams said in a statement. “Based off our projections, we anticipate being unable to continue sheltering arriving asylum seekers on our own and have submitted an emergency mutual aid request to the State of New York beginning this weekend.”