Patrick Mahomes wills Chiefs to overtime win over Titans, throws for over 400 yards 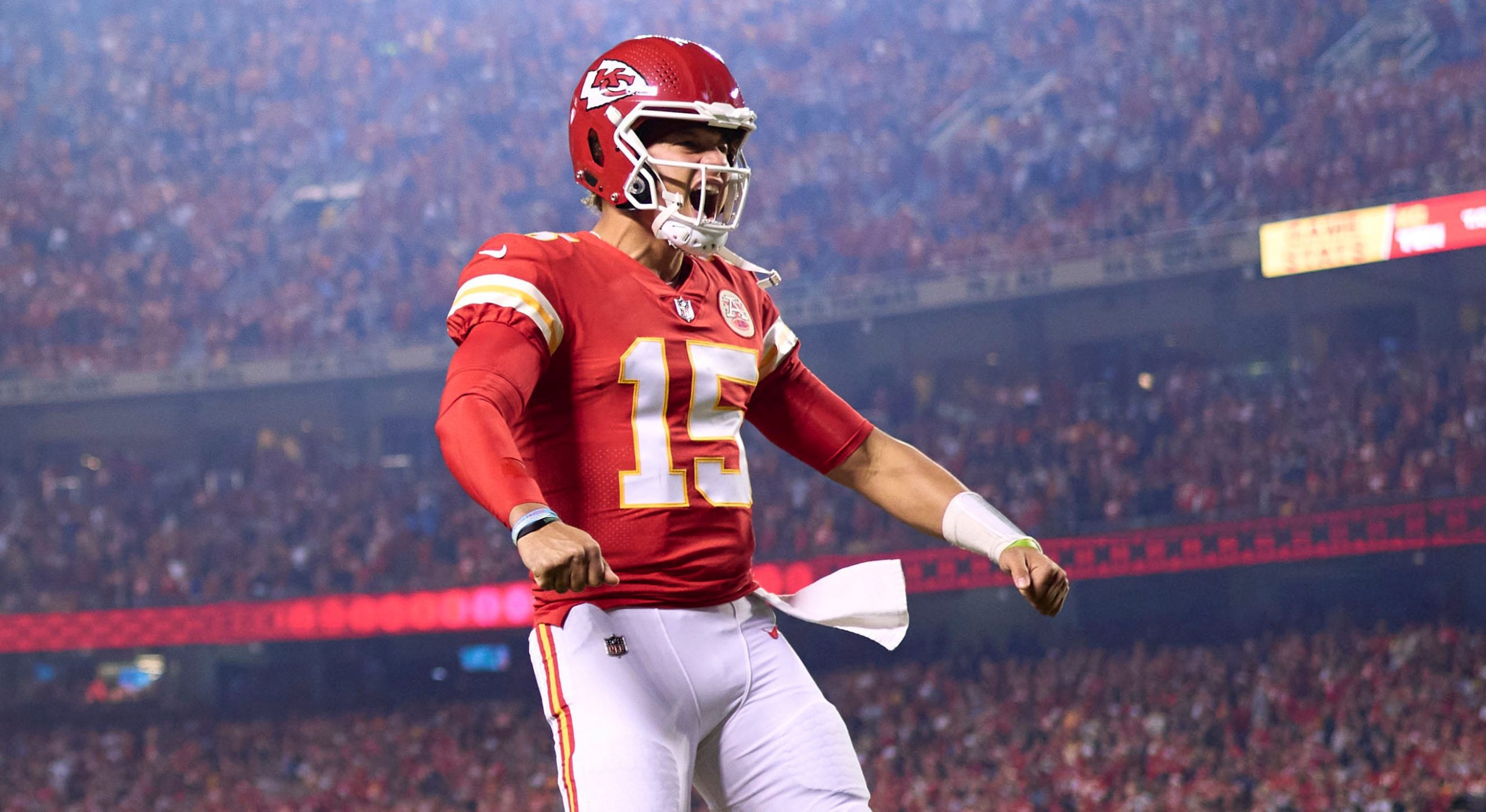 The Tennessee Titans gave their all with rookie quarterback Malik Willis starting in one of the most hostile environments in football, but it was the Kansas City Chiefs winning their Sunday night matchup in overtime, 20-17, to snap the Titans’ five-game win streak.

The Chiefs won the coin toss and took the ball down the field, as Patrick Mahomes was quick to get the ball into the hands of his playmakers. They even went for it on fourth-and-one on the Titans’ 13-yard line, though only a field goal would come out of it as Tennessee got the stops needed to give themselves a chance.

Willis had a chance, but as the Chiefs did in the second half, they made him throw, and he couldn’t get anything going. Two sacks on second and third down came that set up an impossible fourth-and-26 that resulted in an incomplete pass, and the Chiefs celebrated their comeback.

Travis Kelce #87 of the Kansas City Chiefs runs with the ball after a reception against the Tennessee Titans in the first half at Arrowhead Stadium on November 06, 2022 in Kansas City, Missouri.
(Jason Hanna/Getty Images)

There were 68 pass attempts by Mahomes, who completed 43 of them for 446 yards with one passing touchdown and one interception. He found Travis Kelce 10 times for 106 yards as well as 10 receptions for Juju Smith-Schuster for 88 yards.

Mahomes also rushed for 63 yards and a rushing touchdown on six carries.

For the Titans, Willis went just 5-for-16 for 80 yards. Also, not a single wide receiver caught a ball from Willis in this game, as his receptions went to tight ends Chigoziem Okonkwo and Austin Hooper as well as Hassan Haskins, a running back.

Tennessee relied on their run game – Derrick Henry had 115 yards on 17 carries and two scores after putting up over 200 last week against the Houston Texans – and solid defense to deal with the Chiefs, who couldn’t find answers early.

But, as the Titans couldn’t put points on the board, it felt like Kansas City would eventually respond.

There were only two games in his career where Mahomes had fewer than 10 points, so he needed to make something happen in the fourth quarter when the Chiefs took over at their own seven-yard line down 17-9.

Mahomes is used to dazzling with his arm, but it was his legs that did most of the work on this drive. On third-and-17, the Titans had a golden opportunity to get the ball back in their hands, but Mahomes scrambled and made a couple defenders miss for 20 yards and the first down.

Then, on third-and-nine in Titans’ territory, Mahomes found a hole to the right and took it all the way into the end zone for 14 yards to make it 17-15. The two-point conversion saw a couple of flags, but again, Mahomes used his legs to head to the left this time and run it in for the tie.

With momentum on their side, and Arrowhead Stadium as raucous as ever, the Titans couldn’t run down the field and quickly gave the ball back to the Chiefs at the two-minute warning. But nothing came out of it as overtime was needed to settle it.

The Chiefs burned tons of clock in the first quarter to begin this game, making eight minutes and 13 seconds tick off over 15 plays. Due to penalties in the red zone, they could only get a field goal out of it.

However, Mahomes went down the field again and found Mecole Hardman for a seven-yard touchdown pass to make it 10-0 early.

The Titans would respond with their own touchdown, and it was Willis and Henry running their way down the field. Willis had 16-yard and 17-yard runs, while Henry took one 24 yards to set up a red zone opportunity for Tennessee.

After a defensive offside, Henry had a four-yard rush to cut the deficit to three.

But Henry wasn’t done finding the end zone. He went 56 yards to kick off the Titans’ next drive and would eventually take the ball just one yard over the goal line for his second touchdown of the day, giving his team a 14-9 lead.

A Randy Bullock field goal in the third quarter was all they could generate in the second half, though, as the Chiefs’ defense adjusted to the run-heavy offense.

Chiefs kicker Harrison Butker also had a rough night prior to the game-winning field goal from 28 yards. He missed an extra point following the Hardman touchdown and couldn’t put a 47-yarder through in the third quarter as well.

Patrick Mahomes #15 of the Kansas City Chiefs celebrates in the endzone before kickoff against the Tennessee Titans at GEHA Field at Arrowhead Stadium on November 6, 2022 in Kansas City, Missouri.
(Cooper Neill/Getty Images)

The Chiefs will remain at home next week, where they will face the Jacksonville Jaguars. The Titans will face the Denver Broncos in Nashville next Sunday.