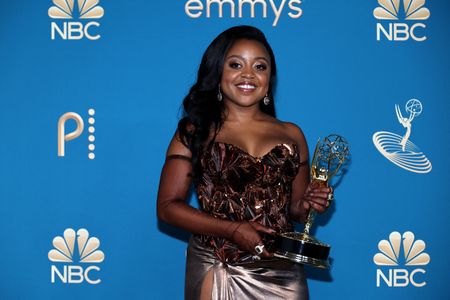 Brunson, 32, is the first Black woman to be nominated three times within the comedy category in the same year. She received nominations for writing, lead actress and series for the show that she created.

Her win – one of four for “Abbott Elementary” – made her the second Black woman in Emmy history to take home the trophy for comedy writing.

Brunson stars in the series alongside Sheryl Lee Ralph and Janelle James. Ralph appeared shocked when her name was called as the winner of best supporting actress in a comedy on “Abbott Elementary,” a show about a predominantly Black school in Philadelphia. The actress began her acceptance speech by singing a rousing, acapella excerpt of the song “Endangered Species.”

“I am a woman, I am an artist, and I know where my voice belongs,” she sang, prompting a standing ovation.

In the series, the Philadelphia teachers navigate the education system trying to do it all: support their students, manage their personal relationships and weather a very irresponsible school principal. Its second season premieres Sept. 21.

Following her win, Brunson told reporters that while the show “doesn’t pay teachers,” she hopes it helps them get paid.

Brunson first gained attention after being turned into Internet memes that went viral, including her “people be gay” image that has since been widely shared during LGBTQ+ Pride month. She went on to garner praise for her Buzzfeed videos and eventually landed roles on premium streaming series like “A Black Lady Sketch Show” on HBO Max.