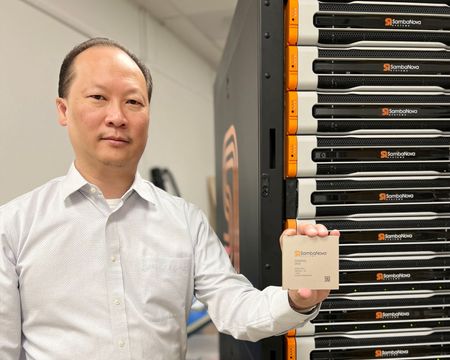 The startup is one of several AI chip companies competing with Nvidia Corp which dominates the AI market. Part of SambaNova’s strategy has been to offer a powerful chip with a software platform that makes it easier for companies without AI expertise to start using AI in their business. SambaNova offers both the hardware and software as a subscription.

“For enterprises, your value’s in your data. What we…are trying to do is take this very complex aspect of the problem and we’re offloading that for you,” said Rodrigo Liang, SambaNova co-founder and CEO.

Gartner’s AI infrastructure analyst Chirag Dekate said Nvidia is starting to face competition from startups such as SambaNova as well as from AI offerings by Alphabet Inc’s Google and Amazon.com Inc’s cloud businesses.

While the subscription model could potentially put a heavy financial burden on SambaNova as it would own the hardware, the company has raised over $1 billion with its latest valuation last year at $5 billion.

Matt Eastwood IDC’s senior analyst for cloud and enterprise infrastructure said computer hardware firms are gravitating to that model to compete with the cloud.

“For the supplier like SambaNova, it just means that rather than having this lumpiness in the revenue stream quarter to quarter as deals land and come in, they can build a smoother, more predictable revenue stream that investors will find attractive,” he said.