Tennis-Jabeur pushes past Rogers to reach U.S. Open fourth round 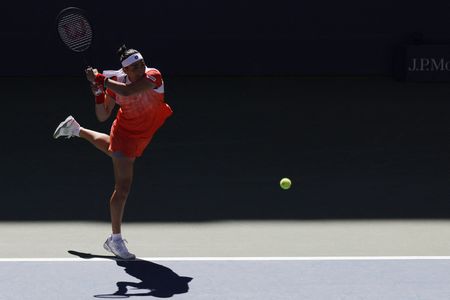 NEW YORK (Reuters) -Tunisian fifth seed Ons Jabeur survived a thrilling duel to down home hope Shelby Rogers 4-6 6-4 6-3 at the U.S. Open on Friday, making the fourth round at Flushing Meadows for the first time.

The Wimbledon finalist squandered six of the eight break points she earned in the opening set but hit her stride in the second as she dropped just two first-serve points.

Rogers called on the trainer to receive some treatment on her right arm before the start of the third set. With Jabeur sprinting through the first four games it seemed all over.

But the American refused to cave in and fought off five match points from 0-40 down in the seventh game to hold serve.

She then broke Jabeur in the next game to roars of approval from the Louis Armstrong Stadium crowd.

A couple of errors from Rogers, however, handed Jabeur victory on her sixth match point and she yelled out in relief.

“Crazy match,” Jabeur said in an on-court interview. “Even down 5-1, 40-love she doesn’t make the mission easy for me … I’m very happy that I kept fighting and went until the end.”

The Tunisian faces a tough road ahead after suffering early exits at hard court tune-up events in Toronto and Cincinnati, with a fearsome fourth round opponent in Russian Veronika Kudermetova, against whom she has a withering 0-3 record.

But Jabeur, who has made a career out of defying expectations as the first Arab player to reach a Grand Slam final, struck an optimistic tone with reporters.

“I just don’t want to stop here. You know how much I love New York, how much I want to be here,” she said.

“Even though the preparation for the hard court season wasn’t great … I’m just going to keep fighting and keep pushing and breaking records here.”