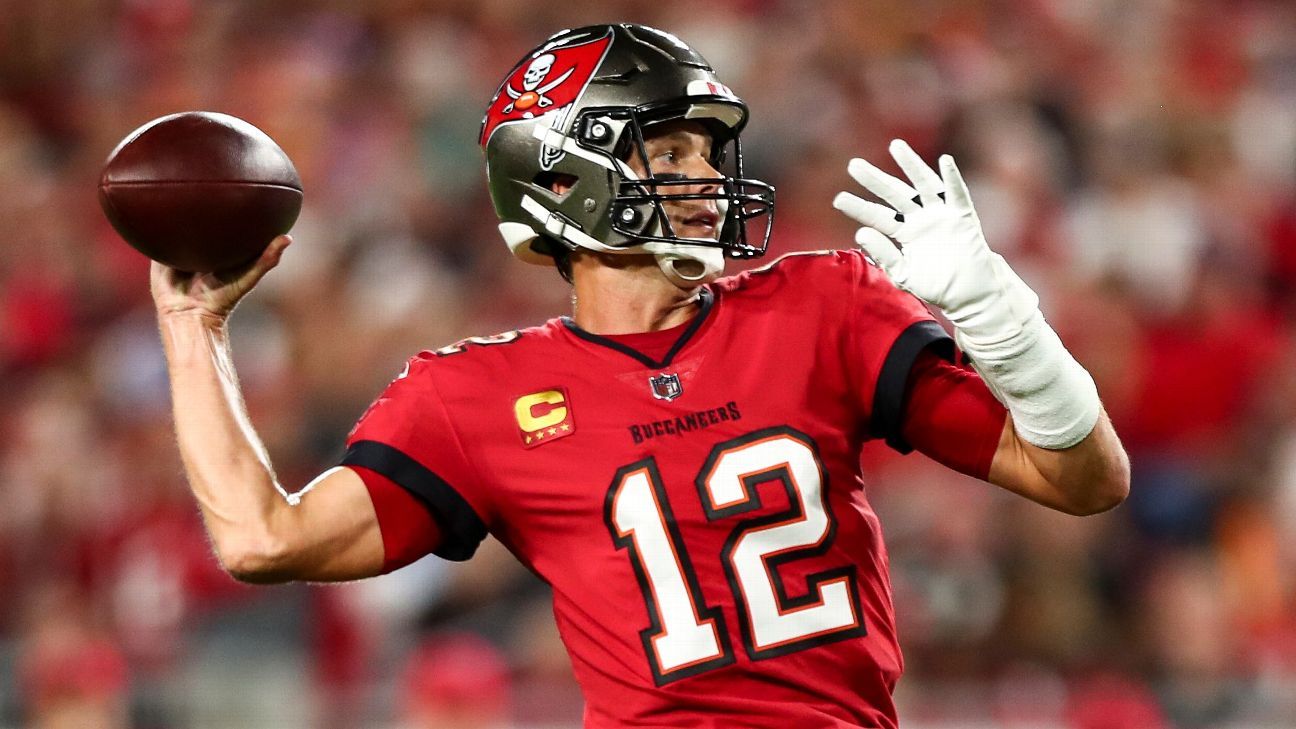 On Nov. 23, 2000, in a forgettable game during a forgettable season, quarterback Tom Brady recorded the first passing yards of his career.

They came in the form of a 6-yard pass to tight end Rod Rutledge in garbage time of a Detroit Lions blowout of the New England Patriots. The pass would go down as the lone completion of Brady’s rookie season.

Now, more than two decades later, Brady finds himself on the verge of the ultimate mark of endurance, a milestone that has never been reached and might never be matched: 100,000 career passing yards (regular season and postseason).

And when it’s all over, Brady will likely shrug and display deference about it all, because, well, what’s one more record for someone who has rewritten the NFL’s record book?

“I don’t think about those things,” Brady said in December. “People kinda tell me they happen. That’s pretty cool. I keep some jerseys and stuff like that. It’s just amazing to have people share in all those great accomplishments, but, obviously, to me, I feel like they’re all team awards, anyway.”

But if there was ever a time for Brady to make it about himself, perhaps this would be it.

Brady is 164 yards shy of reaching the 100,000-yard threshold, a mark that will add yet another layer of separation between the achievements of Brady and everyone else who has played the game. He could reach it as soon as Sunday, when the Buccaneers host the Los Angeles Rams (4:25 p.m. ET, CBS).

The 100,000-yard plateau, perhaps more than any other mark Brady has reached, puts the totality of his accomplishments in perspective. For starters, it highlights his implausible endurance in the game.

But more than that, it is a statistic that accurately reflects Brady’s status as a fixture in the postseason and playoff dominance. It’s why he’s more than 14,000 yards ahead of the second-place quarterback on this list, Drew Brees.

Brady, 45, has not only outlasted his peers. He’s almost always outperformed them, in both the regular season and under the bright lights of the postseason.

They say “quarterback wins” is not a real stat. But we reserve the right to make an exception for the greatest winner in NFL history. Brady’s .744 postseason winning percentage is right on par with his .759 regular-season win rate.

That’s how a quarterback gets to 100,000 yards. Now, with the milestone in sight, let’s take a look at some statistical superlatives from Brady’s journey, with research from ESPN Stats & Information along with some input from those who helped him get here.

‘Not trying to get greedy’

It might be mildly surprising to learn Brady has led the NFL in passing yards in a single season just four times.

His 266.2 career passing yards per game rank ninth all-time. It is an impressive number, to be sure, but it also ranks behind the likes of Matthew Stafford, Matt Ryan and Deshaun Watson.

The underlying principle to Brady’s approach has always been his ability to make the right play, if not the most electric. It is no coincidence an endless parade of slot receivers have excelled while playing with Brady, from Wes Welker to Julian Edelman.

“You can sit back there and just hold on, kind of messing around, going through reads,” said Welker, Brady’s teammate for six seasons in New England. “But he understands that the rush is coming, and that if you have a No. 1 (read), take it. It’s not trying to get greedy. Just trying to stay in positive plays and keeping in third-and-manageable and just moving the ball.

“It’s very frustrating for a defense.”

Considering Brady’s approach, it’s kind of perfect that the longest completion of his career wasn’t a very long pass at all.

In a 2011 game against the Miami Dolphins, with the Patriots backed up to their own 1-yard line, Brady dropped a throw over a defender at the 17-yard line and watched as Welker took it the distance for a 99-yard touchdown.

It was quintessential Brady, who delivered the ball after a couple of seconds because he was standing near the back of his own end zone.

“I just took a speed release and took it right up the inside edge of the numbers and Tom kind of put it on a line,” said Welker, now the Dolphins receivers coach.

“He was saying during training camp that I can’t run seam routes,” Welker said, referring to a route down the middle of the field between the hash marks. “He was messing with me, saying all this stuff… It was very fulfilling being able to talk some trash to him on the sidelines. And then he just gave me his classic smirk.”

‘A cannon for an arm’

Of course, no quarterback could reach Brady’s statistical stratosphere without possessing the ability to throw a reliable deep ball.

Just ask Randy Moss and Deion Branch. They caught nine passes apiece of 50 yards or longer from Brady, the most by any receiver with whom he’s played. Moss famously broke the single-season receiving touchdowns record of San Francisco 49ers HOF receiver Jerry Rice while playing with Brady during the Patriots’ explosive 2007 season, catching 23 touchdown passes.

Perhaps one of the most famous examples of Brady’s deep ball is a 2007 completion to receiver Jabar Gaffney in a win over the Pittsburgh Steelers. The play, a double-lateral throw, traveled 56 air yards — a career-high for Brady.

Brady first threw a lateral across the field to Moss, who mishandled the low pass, before scooping it up and quickly throwing another cross-field lateral back to Brady, who ultimately hit Gaffney for the score.

“We had it in the playbook, and that week we had it in the rotation because we saw how their defense was playing us,” Gaffney told ESPN. “It was because of their aggressiveness. They had been seeing all our receiver screens.”

With all eyes on Moss, Gaffney kept streaking downfield. But the early snafu on the play threw off the timing. For Gaffney, the wait for the ball was excruciating after the defense scrambled to recover.

The ball finally arrived, flying right over the outstretched arm of Steelers safety Anthony Smith — a player who had drawn the ire of the Patriots by guaranteeing a Steelers win during locker room interviews with reporters. Don’t think for a second Brady was oblivious to this.

“I think there was a little extra sauce on that one,” McDaniels said.

Of Brady’s deep throws, Gaffney still marvels at their precision.

“That’s a quarterback you can never stop running on,” he said. “He can put it out there. You are never out his reach. He definitely has a cannon for an arm.”

But Brady stands alone. He has played in an unfathomable 47 postseason contests. And without his postseason excellence, reaching the 100,000-yard mark would likely be an impossibility.

It isn’t just that Brady has won seven Super Bowl titles, as incredible as that might be. It’s also the annual deep playoff runs that have provided Brady the opportunity to accumulate unprecedented numbers. His postseason performance has allotted him nearly three additional seasons worth of games, and Brady consistently makes the most of them.

One look at the NFL’s all-time postseason passing-yardage list provides appropriate context to the level of Brady’s postseason achievements. His 13,049 passing yards in the playoffs are 5,710 yards ahead of the man in second place, Peyton Manning (7,339).

“He’s the ultimate competitor, no matter what the situation,” said former Patriots receiver Troy Brown, who is responsible for 3,913 of Brady’s yards. “His determination to go out and win the game, regardless if you were down 28-3, or you were up, he just had to always finish.”

Has Brady put this mark out of reach? Let’s examine.

The Packers’ Aaron Rodgers (63,054) and the Colts’ Matt Ryan (64,415) are the two active players on the list closest to Brady. But neither seems likely to stick around long enough to mount a challenge. Rodgers, 38, has flirted with retirement. Meanwhile, Ryan was benched last week and faces an uncertain future.

That brings us to the younger group of quarterbacks in the league. They have some advantages working in their favor Brady has not for most of his career, like a 17-game regular season and an expanded playoff field.

That still isn’t likely to be enough.

Let’s begin with the most realistic candidate: Chiefs quarterback Patrick Mahomes. He could reach the 100,000-yard mark by age 41. All he would have to do is continue averaging 18.3 games per season and 300 passing yards per game for the next 14 seasons.

No big deal, really, so long as you’re willing to ignore the possibility of injuries or the likelihood of a decline with age, which seems to impact most NFL players more than Brady.

Before the Chiefs’ matchup with the Buccaneers earlier this season, Mahomes allowed himself to imagine playing at Brady’s age. It was not easily digestible.

“Obviously, it’s hard to play until you’re 45 years old, and I don’t want to be out there just hanging on,” Mahomes said.

Using the same assumptions (current averages projected over time), it would take the Chargers’ Justin Herbert until age 43 to reach 100,000 yards. The Bengals’ Joe Burrow would need until age 46 to accomplish the feat.

And that’s the thing: It isn’t just that Brady’s still going at 45 — the NFL’s oldest player by five years. He’s still consistently productive, even putting aside the Buccaneers’ current struggles. Brady’s career high in regular-season passing yards (5,316) came last season, at 44. Everything about his production and longevity defies logic.

“That’s the crazy part,” Mahomes said. “I mean, if you look at his career, there’s never really been a down year. He’s always been great and had a great season and found ways to get even better.”

Will anyone ever possess the required endurance, durability and fortitude to duplicate Brady’s feat? Only time will tell. Lots and lots of time.