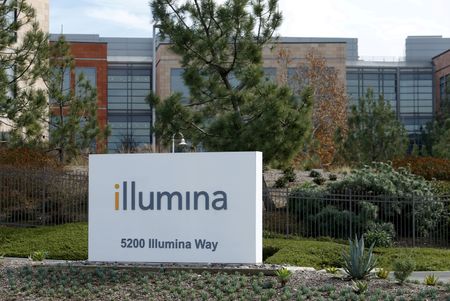 Judge D. Michael Chappell ruled the acquisition will not hurt competition, in a blow to the agency, which was challenging the deal. The ruling has not yet been made public.

Under FTC rules, the decision is subject to review by the full Federal Trade Commission. The FTC staff filed a notice Friday https://www.ftc.gov/system/files/ftc_gov/pdf/D09401CCNoticeofAppeal.pdf appealing the decision. Illumina shares closed down 2.3% on Friday.

Increasing competition has been a mandate of the Biden administration, and the director of the FTC’s Bureau of Competition, Holly Vedova, had said on Thursday the agency was considering challenging the judge’s ruling.

The FTC filed a lawsuit in March 2021 to stop Illumina’s deal to buy its former subsidiary Grail, arguing it would slow innovation for tests designed to detect multiple kinds of cancer. The vote to sue was unanimous.

The FTC has said Illumina is the dominant provider of DNA sequencing for multi-cancer early detection tests, which Grail uses to make a blood test to detect cancers.

The deal would mean Illumina would have no incentive to provide the DNA sequencing to Grail’s rivals, or would have an incentive to try to raise their costs, the FTC had argued.

But the judge “rejected the FTC’s position that the deal would adversely affect competition in a putative market for multi-cancer early detection tests,” Illumina said on Thursday.

Reuters reported in July that Illumina’s acquisition of Grail will likely be blocked by EU antitrust regulators because of concerns about concessions offered by the U.S. life sciences firm.

Illumina closed the deal in August 2021 but said it would hold Grail as a separate company with regard to the EU review.]

The FTC in May 2021 dismissed its federal court lawsuit, preferring to go ahead with the administrative proceeding, arguing the federal court case was no longer needed since the European Commission was investigating.

(Reporting by David Shepardson in Washington; Editing by Jonathan Oatis and Matthew Lewis)