USA lose, are England and France next? 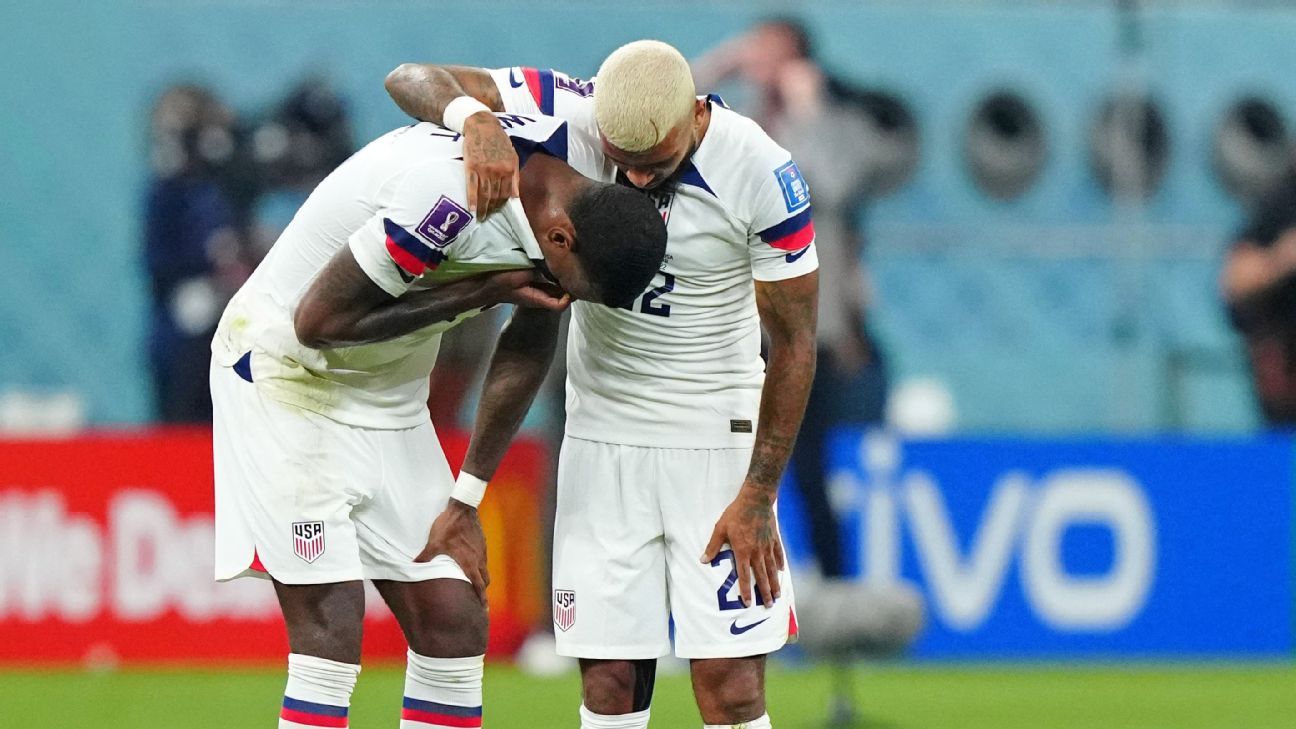 There’s an old saying that likely goes: “What the World Cup giveth, it can taketh.” And that’s how fans might feel after seeing the USA’s remarkable run in Qatar end in heartbreaking fashion thanks to the Netherlands. Meanwhile, Lionel Messi and Argentina withstood a late surge by Australia to book a date with the Dutch in the quarterfinals.

Be sure to check in with ESPN throughout the tournament as we bring you the latest from Qatar. Here’s what you might have missed from Saturday’s World Cup happenings, and a look ahead to Sunday for what’s next.

Not the best way to start a Saturday morning, considering the United States’ solid form during the group stage and the hope of seeing this group of young players at least reach the quarterfinals.

But the Netherlands showed the gap in quality that still exists between the USA and the sides they want to compare themselves with. Netherlands coach Louis van Gaal’s tactical game plan in the Oranje‘s 3-1 win was ruthlessly effective, and it forced the US into mistakes (leaving players unmarked in all three Dutch goals) and to do things it wasn’t good at (breaking down an organized defense).

Gregg Berhalter talks to Sam Borden after the USMNT’s World Cup exit at the hands of the Netherlands.

Often stoic and at times combative, Van Gaal was in a playful mood after Saturday’s win, at one point leaning to his side to plant a kiss on the cheek of man-of-the-match Denzel Dumfries (one goal, two assists) during the postmatch news conference. Van Gaal’s system might not be the most attractive, but it worked so well against the US that two goals involved one wing-back assisting the other — first Dumfries for Daley Blind and then Blind for Dumfries.

Still, there will be a sense of what could have been for the USA. Christian Pulisic muffed an early chance, and the USA’s lone goal from Haji Wright looked more accidental than acrobatic. And of course, as it has been for some time, there’s still a need for an effective starting striker to emerge. As US coach Gregg Berhalter said afterward, “We don’t have a Memphis Depay right now.”

Did the US deserve to beat a historical powerhouse like the Dutch, to then face Lionel Messi and Argentina in what would have been a made-for-TV David vs. Goliath quarterfinal matchup? At least, these players accomplished plenty. But in four games, they also did just enough to leave everyone believing there should have been more.

But let’s move forward. Whether Berhalter continues as coach, the USA’s future is bright and the buzz is real. Lessons will be learned, experience will be gained and there will be plenty to build upon. We already counting down to the 2026 World Cup.

Deep down, Australia knew they had very little chance in Saturday’s round of 16 meeting against Argentina. And after Lionel Messi’s goal in the first half and a goalkeeper gaffe gave Argentina a second with about a half hour to spare, it seemed the Socceroos’ run in Qatar was done.

But that’s when the true fun began. Australia pinned one back after Enzo Fernandez scored an own goal and all of the sudden it seemed as though Messi’s quest for that elusive World Cup title could be on the ropes. Australia’s Aziz Behich did his best impression of Messi with a memorizing run that was desperately deflected by defender Lisandro Martinez.

And then just seconds left, keeper Emiliano Martinez made the save of the night on Socceroos teenage star Garang Kuol’s last-gasp attempt to ensure that Argentina wouldn’t follow fellow traditional powerhouse Germany through the early exit door at this tournament.

Australia has made its presence known at this World Cup, as have their fans back home who’ve stayed up all night to cheer them on. There’s no shame in Saturday’s defeat to a player on a mission like Messi. Just a group of players that gave it their everything and fell just short.

Sebastian Salazar reacts to an underwhelming Argentina win vs. Australia in the round of 16.

Sunday brings two round of 16 games that are massively compelling for wildly different reasons. Four teams, and only two can book a ticket to the quarterfinals. So how do they look?

The earlier game sees the defending World Cup champions, France, taking on Robert Lewandowski and Poland. On paper, it might seem like an easy win for Didier Deschamps’ all-star team that is still one of the bookies’ favorites to win it all despite losing Karim Benzema, Paul Pogba and N’Golo Kante to injury prior to the tournament. The likes of Aurelien Tchouameni and Eduardo Camavinga are holding things down in midfield, and the trio of Antoine Griezmann, Kylian Mbappe and Ousmane Dembele are getting it done at the attacking end.

While they did struggle against Tunisia in their third group stage game, ultimately losing 1-0, that was more down to Deschamps’ heavy rotation of players with qualification already secure than a sign of any significant weakness.

Julien Laurens doesn’t hold back as he rips into Didier Deschamps and the French players after their 1-0 loss to Tunisia in Qatar.

Poland will need to lean on their stars if they’re to ruffle French feathers. Lewandowski must get service in the box so he can force errors or put the ball on target, and there are several players capable of picking out the Barcelona star near goal: Piotr Zielinski and Arkadiusz Milik are the main men in that regard. If France manage to breach their defense, Wojciech Szczesny is in goal and seems, based on some of his highlight-reel saves, to be in peak form. We still think France advance, but in a tournament of major shocks, anything’s possible.

As for England, they’ll be looking to stay on course for a first major international trophy since 1966 though winning Group B hasn’t given them the advantage in terms of opponent.

Senegal haven’t missed a beat despite the devastating injury to talisman Sadio Mane before the start of the tournament. Tidy wins against Qatar and Ecuador were enough to overcome a loss to the Dutch in their opening game, and they’ve been able to find goals even after losing Mane: Their five goals in Group A were all scored by different players, with key defender Kalidou Koulibaly popping up with the decisive finish to ensure their spot in the round of 16. Many of their stars — including winger Ismaila Sarr — have Premier League experience and won’t fear their more fancied opponents one bit.

Tom Hamilton praises the performance of Phil Foden against Wales, saying he’s given England manager Gareth Southgate a “good headache” for their next game.

England, meanwhile, need to continue setting the pace in games rather than taking a slow and steady approach as they did in particular against the US in the group stage. When they were passive and invited pressure, they were fortunate not to concede, while their more positive approach against Iran and Wales resulted in nine goals scored and just two conceded. With zero margin of error from here, manager Gareth Southgate must show a bit more daring in his tactics and team selections if they’re to continue in this competition.

Harry Kane has been subdued, but Jack Grealish, Phil Foden and Marcus Rashford have provided enough electricity to power a small city. The England version of Harry Maguire has held up in defense — it’s good the Manchester United version didn’t travel to Doha — but they will still need to show some gusto and live up to the attacking talent in the squad.

Again, we’d expect them to succeed, but just as likely is a 2-2 game decided 5-4 on penalties. We’re not going to say who the winner is.

Playing at a World Cup without a club? Cristiano Ronaldo and only few others know
It’s a rare group: World Cup players without a club to call home. For some it’s a distraction; for others, it’s motivation.

Playstation, rotating DJs and ‘foot-golf’: How France relax at the World Cup
Les Bleus are aiming to be repeat champions. But you wouldn’t know from visiting their camp that they’re feeling any pressure.

Spain were lucky after Japan defeat, but can they reset ahead of Morocco match?
Spain were fortunate to emerge from Group E given the way Japan fought back to beat them. So other teams know how to stop La Roja?

If you’re looking to bet on the World Cup, ESPN contributors Paul Carr, Dan Thomas and Dalen Cuff are here to give you key tips on odds, options and futures. Here’s what we have for Sunday’s matches.

Carr: France’s loss to Tunisia doesn’t concern me, given the squad rotation and unfamiliarity. Poland was fortunate to lose only 2-0 to Argentina (3.7 xG on 23 shots) and gave up a ton of good chances to Saudi Arabia, too (1.7 xG on 16 shots). I think France cruises here with the first team back, and I’ll lay the 1.5 goals at -115.

Cuff: Poland was arguably the most unimpressive team to advance to round of 16. France’s last loss was with a lineup of reserves. I think they dominate. The play for me is win to nil -116. I also will probably play Olivier Giroud to score anytime +120.

Carr: I remain unconvinced by England manager Gareth Southgate’s willingness to go for it in the knockout stage. In eight games over the previous two tournaments, England put only two away before the 80th minute, including draws against opponents Colombia (2018 World Cup) and Denmark (Euro 2020). Senegal is missing Idrissa Gueye in midfield, but I think they have a decent shot to hang with England at least through 90 minutes, so I’ll play Senegal on the double chance at +150. If you’re feeling more daring, I don’t mind playing them to advance at +360.

Cuff: I feel similar to Paul here, I played England to be eliminated in round of 16. I just don’t believe in this team and how Southgate sets them up. However, I thought their opponent here would be Ecuador, which provides a different challenge than Senegal. I think I’m going to slightly hedge here by not playing a side, but I think we see more goals than you’d expect. Over 2.5 +125.