Uvalde Police Chief unanimously voted out by school board 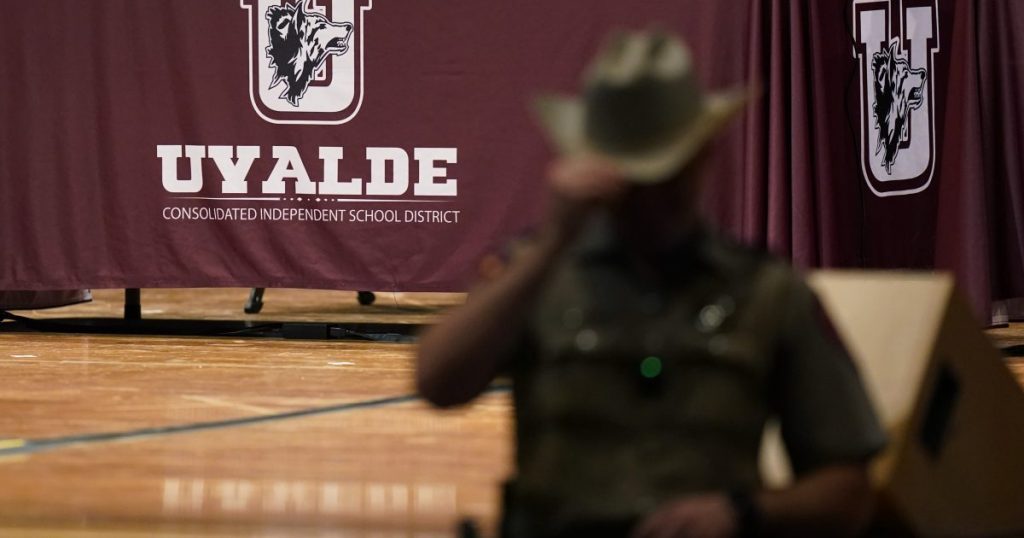 Texas Department of Safety Troopers stand by for a meeting of the Board of Trustees of Uvalde Consolidated Independent School District, Wednesday, Aug. 24, 2022, in Uvalde, Texas. The board held termination hearings to decide the employment fate of Uvalde School District Police Chief Pete Arredondo. (AP Photo/Eric Gay)

Members of the Uvalde school board voted to remove Police Chief Pete Arredondo over his response to the Robb Elementary Shooting. The unanimous vote has terminated the contract of the disgraced Police Chief.

During a meeting on Wednesday, the school board secretary Laura Perez made the motion to remove Arredondo from his position. Her motion received an overwhelming amount of support from members of the board.

Prior to this, Arredondo had already turned in his resignation letter after being heavily criticized for his actions during the shooting incident at Robb Elementary which left 21 people dead including 19 children.

“Mister Board President, I move that good cause exist to terminate the non-certified contract of Pete Arredondo effectively immediately,” said Perez. “I further move that good cause exist to ratify the unpaid leave status of Mister Arredondo starting July 19, 2022. Finally I move to authorize the superintendent to issue written notice to Mister Arredondo of this board action including filing any needed reports required by the termination.”

Members of the community were left unsatisfied despite the decision to strip the school district Police Chief of his title. Robb Elementary student, Caitlyn Gonzalez, lambasted the police who were present at the school during the incident saying they ‘don’t reserve to wear a badge’.

Before Uvalde CISD voted to fire Pete Arredondo, a young Uvalde girl demanded that law enforcement who responded at Robb “turn in your badge and step down.” https://t.co/OJRzBkMxQY pic.twitter.com/LDiSBaSVWP

“I have messages for Pete Arredondo and all the law enforcement that were there that day: turn in your badge, and step down,” said Gonzalez. “You don’t deserve to wear one.”

Another Uvalde resident, Daniel Myers, expressed his outrage at the school board. He accused them of not caring about the families who were affected by the tragedy. Myers also believes the board was trying to cover up the incident by dismissing Arredondo.

“You guys don’t care a squawk about these families,” claimed Meyers. “If it was one of your children, hands would be rolling right now. But because it’s not, you don’t care. You are not going to sweep this under the rug. You’re not. All of you are accountable.”

In the meantime, several government agencies including the FBI have launched investigations into the police response to the shooting.

MORE NEWS: Rubio: The Democrat Party Has Abandoned Their Voters