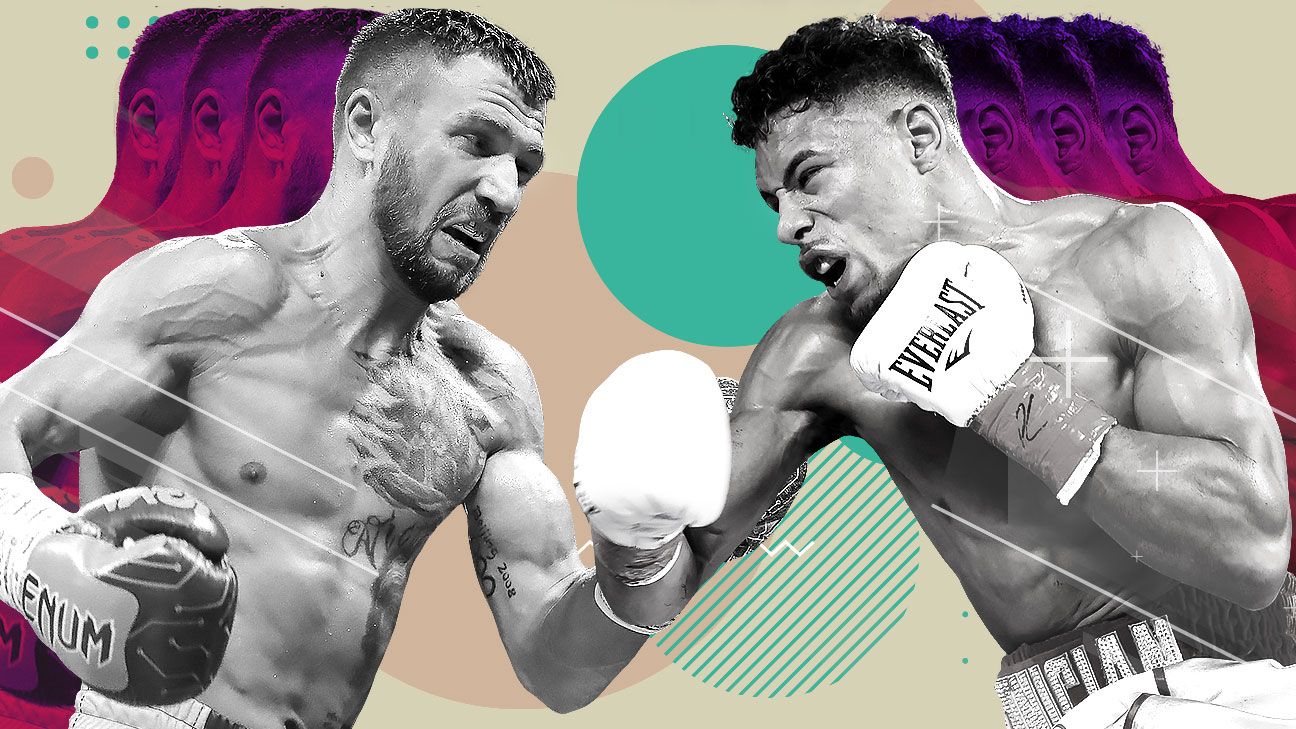 Vasiliy Lomachenko returns to the ring for the first time since his December victory over Richard Commey, facing Jamaine Ortiz in the main event of a Top Rank boxing card at the Hulu Theater inside New York’s Madison Square Garden on Saturday (ESPN+, 6:25 p.m. ET).

Lomachenko (16-2, 11 KOs), 34, a two-time gold Olympic medalist and former unified lightweight champion, was scheduled to face George Kambosos Jr. in June for the lightweight championship, but Lomachenko decided to turn down the fight to stay with his family when Russia invaded his home country of Ukraine in February. Lomachenko joined a territorial defense battalion in Ukraine until August, when he returned to the U.S. to resume his boxing career.

In Glendale, Arizona, at the Gila River Arena, YouTuber-turned-boxer Jake Paul takes on former UFC middleweight champion Anderson Silva in an eight-round cruiserweight bout in the main event of a card that also includes former NFL running back Le’Veon Bell against UFC veteran Uriah Hall in a light heavyweight fight.

Paul (5-0, 4 KOs), 25, of Cleveland, is coming off an impressive TKO victory over Tyron Woodley in December. After failed attempts to face Tommy Fury and Hasim Rahman Jr. earlier this year, Paul picked MMA legend Silva as his next opponent.

Stay here for live results and analysis from Mike Coppinger and Marc Raimondi.

Round 4: Ortiz really bringing the fight to Lomachenko, doubling and tripling up on the jab, and now throwing some powerful right hands behind it. Lomachenko did good work, too, with a bundle of power shots. 10-9, Ortiz. 39-37, Ortiz.

Round 3: Ortiz continues to find success with his jab, but there isn’t much coming behind it. Lomachenko broke through with a left-right combo that caught Ortiz’s attention to win the round. 10-9, Lomachenko. 29-28, Ortiz.

Round 2: Lomachenko is known as a slow starter, and tonight is no different. Ortiz continues to work the jab to keep Lomachenko on the outside. 10-9, Ortiz. 20-18, Ortiz.

Round 1: Jamaine Ortiz established his educated jab right from the opening bell, using it to keep the smaller Lomachanko at bay. He punctuated the round with a sharp right hand to the body, and already, Lomachenko has a huge welt under his right eye. 10-9, Ortiz.

Ring announcer Mark Shunock just made the introductions and the fight is next. Referee is Mark Fitch

Both Ortiz and Lomachenko are in the ring. Lomachenko is wearing black Venum gloves and Ortiz wears white trunks and white Grant gloves.

In New York: Ramirez takes his time, stops Romero in Round 9

Robeisy Ramirez delivered another impressive performance with a ninth-round TKO of Jose Romero as he inches closer to a featherweight title shot.

The two-time Olympic gold medalist from Cuba dropped Romero with a left hand in the opening round and finished the Argentine with a pair of left hands that prompted the referee to stop the bout with 40 seconds remaining in Round 9.

Ramirez (11-1, 7 KOs) was set for a step-up bout against Jessie Magdaleno, but the former champion withdrew with a hand injury. Instead, Ramirez made a statement with the finish of Romero (26-3, 9 KOs), who went the distance with both Isaac Cruz and Michel Rivera last year.

Ramirez was coming off a highlight-reel KO of Abraham Nova in June. — Coppinger

In Arizona: Sylve stops Rodriguez in just over a minute

Ashton Sylve, the teen prospect whom Paul promotes under the Most Valuable Promotions banner, stopped veteran Braulio Rodriguez via knockout at just 1:01 of the very first round. Rodriguez came in wildly, Sylve evaded and then Sylve landed an absolutely gorgeous left hook counter that put Rodriguez down for good.

“I can do another round — I can go another few rounds,” Sylve said.

Sylve (8-0) is just 18 years old and is one of the top up-and-coming fighters in boxing. The Long Beach, California native has finished all of his fights via knockout. Rodriguez (20-5), a 34-year-old from the Dominican Republic, fought Ryan Garcia just two fights ago.

Consider it a moral victory for Le’Veon Bell, the former NFL star running back.

Uriah Hall, a UFC veteran, clearly won every round against Bell for a unanimous decision victory in a four-round bout (40-36, 40-36, 40-36), but Bell didn’t get stopped and was never really badly hurt against someone with vastly more combat sports experience than him. Bell even dished out a very hard right hand in the third that backed Hall up.

“This is the toughest sport in the world and I give you so much props,” Hall said in his post-fight interview. “I’m proud of you, man. … He definitely surprised me. He’s pretty good.”

“I’m the dude that’s gonna come out here and expose him,” Hall said. “If Anderson [Silva] doesn’t do it, I’m gonna be the one to f— you up.”

Hall was in pursuit for most of the fight with Bell trying to evade and look for jabs to the face or body. Bell was making awkward movements and Hall had a hard time cutting off the ring, though he did pop up with some hard right hands, left hooks and combinations. Hall landed three straight right hands in the third round and finished strong with a big exchange with Bell.

Bell and Hall were both making their pro boxing debuts, but Hall has 17 years of experience in MMA and a karate background. Bell, a 30-year-old Ohio native, is a former All-Pro and Pro Bowler in the NFL for the Pittsburgh Steelers and other teams.

Hall, a 38-year-old Jamaica-born fighter who grew up in New York and lives in Dallas, is tied for the most KO/TKOs in UFC middleweight history (8). He announced his retirement from the UFC back in August. –Raimondi

Torrez, a 23-year-old from Tulare, California, connected on a pair of left hands that sent Hefny tumbling to the canvas in the opening round.

A series of shots from Torrez (4-0, 4 KOs) produced another knockdown in the closing seconds of Round 2. In Round 3, Hefny was deducted one point for holding before he was dropped a third and final time, prompting the referee to stop the fight without a count.

This was the first time Torrez reached Round 3. Hefny, a 38-year-old from Egypt, has now lost two in a row. — Coppinger

Ragan met the toughest test of his pro career in a unanimous-decision victory over Lebron.

Ragan — who won by scores of 77-75, 78-74 and 79-73 — was forced to hold on in Round 7 after he was rocked by a Lebron right hand. Later in the round, he was deducted one point for repeatedly spitting out his mouthpiece, ostensibly to buy more recovery time.

Despite the rough moments, Ragan (8-0, 1 KO) landed the cleaner shots and busted up Lebron’s face.

A 25-year-old Olympian from Cincinnati, Ragan fought past six rounds for the first time. Lebron (18-5-1, 11 KOs), a 30-year-old from Puerto Rico, has now lost five of his last seven bouts. — Coppinger

After Mikhail Varshavski, the famous YouTuber nicknamed “Dr. Mike,” had some early success, it was basically one-way traffic. Avila, a longtime member of Nate Diaz’s team, used big overhands and left hook counters to handily defeat Varshavski via unanimous decision (40-36, 40-36, 40-36) in a four-round bout to open the pay-per-view portion of the card. Diaz was watching from a ringside seat.

Varshavski, who has tens of millions of subscribers across social media channels, was making his pro boxing debut and has been touted as the only influencer other than Jake Paul to take the plunge in boxing against an opponent who was already a pro boxer. Avila, who has fought MMA in both the UFC and Bellator, moved to 2-1 as a pro boxer.

In the closing seconds, Avila rocked Varshavski with combinations and was close to finishing the fight, but Varshavski was saved by the bell.

Varshavski, 32, will donate his fight purse to the Harlem Boys & Girls Club. Avila, 29, was wearing “Real Fight Inc.” on his shorts, signifying that he is the first fighter signed to Diaz’s new promotional company which is on its way to being officially licensed.

“Any UFC fighters out there, get out of your contract and come get yourself some real s—,” Avila said in his postfight interview. –Raimondi

Ali Walsh, the grandson of Muhammad Ali, continued his development with a unanimous-decision victory over Billy Wagner in a six-round middleweight bout.

Ali Walsh (7-0, 5 KOs) landed a number of hard shots — particularly the right hand — that bloodied Wagner throughout. However, Ali Walsh also absorbed a bundle of power punches in return during the fight.

The 22-year-old Ali Walsh, who fights out of Las Vegas, ends his 2022 campaign with four victories. Wagner (5-3, 1 KO), a 29-year-old from Montana, lost for the second time in four fights. — Coppinger

Johnson, an Olympian from Cleveland, impressed once again with smooth boxing and precise counterpunching in a shutout decision victory over Garcia.

Johnson (6-0, 4 KOs) used his educated jab to set up his power shots and controlled the action from start to finish. The 24-year-old prospect was rated No. 25 on ESPN’s list of the top boxers under 25.

Isley, an Olympian from Washington D.C., remained undefeated with a unanimous-decision victory over LaVallais in an eight-round middleweight bout.

The fight proved to be a valuable experience for Isley, who was forced to go the eight-round distance for the first time. LaVallais, a 29-year-old from Louisiana, suffered a decision loss to another Top Rank prospect, Xander Zayas, in March. LaVallais (14-4-1, 9 KOs) won two straight fights since the setback and showed to be a durable opponent for Isley.

He stood in the pocket and traded with Isley, but the 24-year-old racked up points with his superior strength and shot placement. Isley improved to 8-0 with four knockouts. — Coppinger

Green dominated the fight with her pressure and hard punching combinations, forcing Suarez to not come out for the sixth round.

While Green didn’t do a ton of damage, she landed hard right hands and started working the body ferociously in the fifth round. The official result was TKO at 2:00 of the fifth.