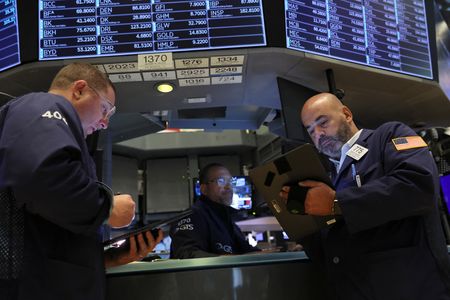 (Reuters) – U.S. stock indexes climbed the most in roughly a month as bond yields eased, with investors shrugging off hawkish remarks made by Federal Reserve officials on Wednesday.

The last time the Nasdaq Composite, S&P 500 and the Dow Jones Industrial Average reached a higher one-day percentage jump was on Aug 10, although investors doubt this is a long-lasting trend.

U.S. stocks have sold off sharply since mid-August after hawkish comments from Fed Chair Jerome Powell were compounded by signs of an economic slowdown in Europe and China and aggressive steps by major central banks to tame inflation.

Data signaling strength in the U.S. economy has prompted traders to bet on a 75-basis-point interest rate hike by the Fed later this month. Fed fund futures implied investors were pricing in a more than 76% chance of such a move.

High-growth companies such as those in the tech sector tend to benefit when yields go down as it means a lower discount rate on their future profits when investors are calculating valuations.

Still, investors are looking for more outward signs of how Federal Reserve rate hikes will unfold to tame a surging inflation before its next meeting later this month.

“The bond markets behaving a little bit better today which is giving the stock market a little bit of a better feeling, but the big worries are still what the Fed is going to do on Sep 21. So we’re seeing a back and forth tug-of-war each day,” said Brent Schutte, Chief Investment Officer at Northwestern Mutual Wealth Management Company.

Meanwhile, Richmond Fed President Thomas Barkin said the U.S. central bank must lift interest rates to a level that restrains economic activity and keep them there until policymakers are “convinced” that inflation is subsiding, while Federal Reserve Vice Chair Lael Brainard added the monetary policy will need to be restrictive “for some time.”

The main focus will be on Powell’s speech on Thursday and U.S. consumer price data next week for clues on the path of monetary policy.

The Fed’s “Beige Book”, a periodic snapshot of the health of the U.S. economy, indicated that price pressures are expected to persist at least through the end of the year.

Ten of the 11 major S&P sectors were trading higher, led by a jump in utilities, reflecting the defensive positioning by investors due to economic uncertainties.

The energy index fell 1.16% as oil prices tumbled about 5% on demand worries related to looming recession risks. Brent crude fell below $90 a barrel.

Volume on U.S. exchanges was 10.21 billion shares, compared with the 10.43 billion average for the full session over the last 20 trading days.

Advancing issues outnumbered declining ones on the NYSE by a 3.07-to-1 ratio; on Nasdaq, a 2.60-to-1 ratio favored advancers.