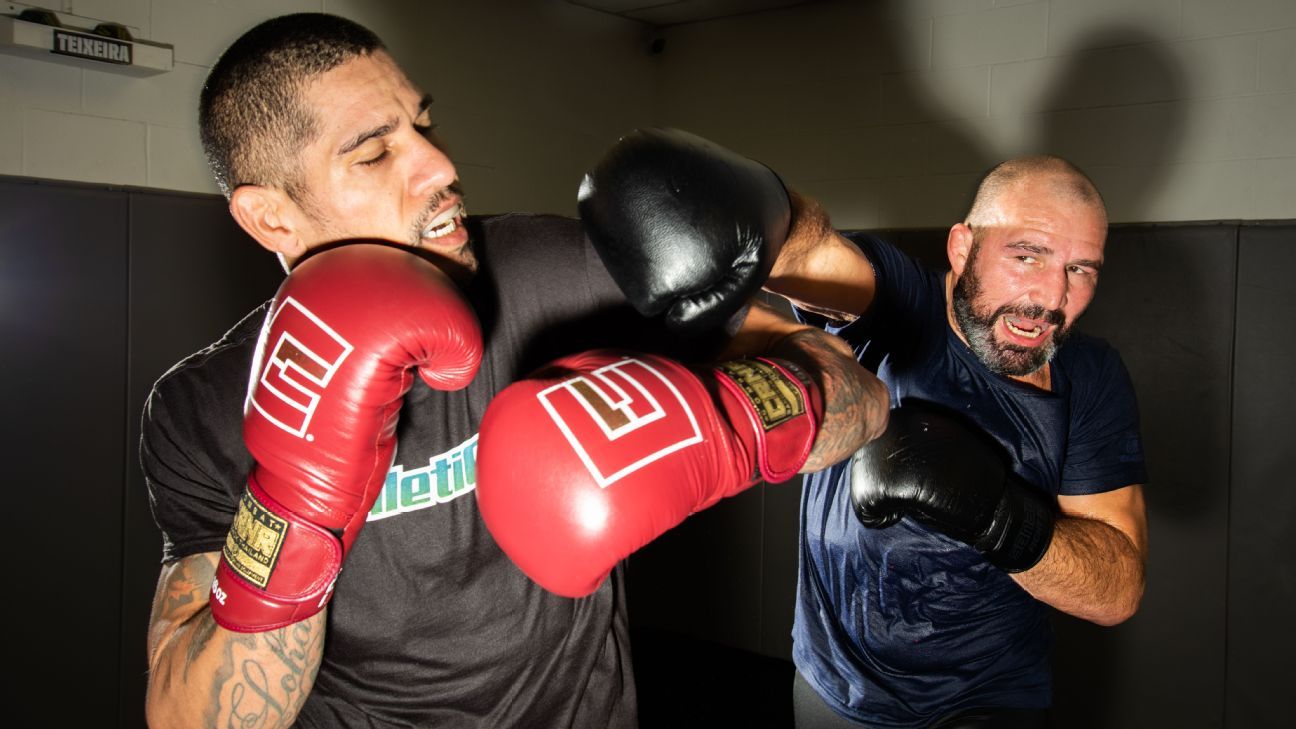 BETHEL, Conn. — “It’s difficult here,” says Alex Pereira. He is shirtless and his torso is covered with sweat as he sits on a bench in front of an open window, a welcome autumn breeze cooling off the gym. “It’s very difficult.”

Pereira is not complaining. It’s a little challenging to get fully inside his words, because he is speaking in Portuguese and his words are then translated by the shirtless, sweaty training partner sitting beside him, former UFC light heavyweight champion Glover Teixeira.

But it’s easy to pick up on the tone of Pereira’s voice. It is one of contentment, mixed with a firm purposefulness. The sense of purpose is what one would expect from a man preparing for the biggest fight of his life on the biggest stage. On Saturday, inside Madison Square Garden in New York City, Pereira will challenge UFC middleweight champ Israel Adesanya in the main event of UFC 281 (ESPN+ PPV, 10 p.m. ET). His purpose for that night is as clear as the blue sky outside the window right behind him.

The contentment, though? Pereira feels at peace in this gym in western Connecticut because of the community he has found here. The connectedness among those who train at Teixeira MMA & Fitness goes deep enough to get gritty. The workouts push beyond self-imposed limitations, yet all who step on the mat are in it together, nestled within a cocoon of motivation and support. The gym is, after all, a family project.

Israel Adesanya defends his middleweight title against Alex Pereira in the main event of UFC 281 in New York.

Teixeira opened the facility eight years ago with his wife, Ingrid, who grew up in the neighboring town of Danbury, and the family vibe embraces everyone who walks through the door. In the case of Pereira, who, like Teixeira, is a native of Brazil, the kinship inside the gym is literal. His sister Aline, who recently signed to make her pro MMA debut, also trains here.

“We’re a family here, a good vibe, very friendly,” Teixeira says. “But like Alex said, it is difficult. Hard work every day. It’s not for everyone, but Alex showed he belonged here the first time he came.”

That was in the summer of 2020, when Teixeira brought in Pereira to help with his training for a fight against Thiago Santos. It was a dangerous matchup with high stakes. Teixeira was on a four-fight winning streak and was on the cusp of a title shot even while on the wrong side of age 40. But first, he had to get past the heavy-hitting striker known as “Marreta,” which is Portuguese for “Sledgehammer.” So Team Teixeira enlisted the help of a renowned power puncher.

Pereira was a kickboxing world champion at the time, the middleweight titlist in Glory, the sport’s most prominent fight organization. Of Pereira’s 33 kickboxing victories, 21 had come by knockout. Among them was a left-hook KO of Adesanya in 2017.

“He hits so hard,” Teixeira recalls of his first sparring session with Pereira. “I’ve trained with heavyweights, and no one has power like Alex.”

Teixeira’s head boxing trainer, Fernely Feliz, remembers that initial gym session well. Even though Pereira did not have the physical burliness of Teixeira and had yet to polish the craft of MMA, it immediately became clear to Feliz that Pereira had the skills and toughness to go with that lights-out left hook of his. “First time I saw him train with us, I told Glover, ‘Keep an eye on this guy,'” Feliz says. “This guy is a real fighter.”

It turns out the admiration was mutual. Pereira was at a point in his career where MMA was beckoning. He’d taken three fights in that sport in 2015 and 2016 in Brazil, and after losing his debut by submission — no surprise for a kickboxing specialist — he had knocked out his next two opponents. But then he went back to kickboxing, where he was on a championship track.

Nonetheless, MMA became increasingly enticing for Pereira as the sport’s profile grew and Adesanya emerged as one of its grandest stars. When the former kickboxer, whom Pereira had defeated not once, but twice, became UFC champ in 2019, a YouTube video of “The Last Stylebender” being KO’d by Pereira at Glory of Heroes 7 in the Brazilian’s hometown of Sao Paulo was gaining massive attention. (Today, it has 14 million views.)

While training in Bethel with Teixeira and his team in the fall of 2020, Pereira signed a MMA contract with the Texas-based Legacy Fighting Alliance, the same organization that recently signed his sister, who also came from Glory kickboxing. Alex’s LFA debut, a first-round knockout win that November, also turned out to be his swan song with the promotion. The UFC swooped in the following September to bring on the man who had twice defeated its 185-pound champion.

Teixeira wasted no time in talking up a third meeting with Adesanya. Pereira had not even made his Octagon debut yet, and his friend and training partner was on a Brazilian podcast announcing to the champ, “Daddy’s in the UFC.”

After scoring knockouts in his first three UFC appearances, Pereira is poised for his big moment. It is a daunting challenge for anyone to step in with Adesanya, who is No. 2 in ESPN’s pound-for-pound men’s rankings. That is especially so for a fighter with just seven MMA bouts. But Pereira exudes confidence, partially because of his kickboxing success against Adesanya and this setting where he has been preparing for the title fight.

“This is hardcore training,” Pereira says, catching his breath following a morning workout. “When I came here, it was not easy for me. But I said, ‘I’ve got to stay.’ Now I love it. I am at a level in MMA where I can fight anyone.”

Alex Pereira explains how the connection to his indigenous roots helps feel connected to a higher purpose.

A large frame on the wall at Teixeira MMA & Fitness displays the gloves and shorts that Teixeira wore on Oct. 30, 2021, at UFC 271, along with a photo of him choking out Jan Blachowicz that night to become light heavyweight champion. Nearly a year prior to that, Teixeira had made the most of Pereira’s training help and earned the title shot by submitting Santos. Teixeira’s reign would be short-lived, though, as he was dethroned in June by Jiri Prochazka.

On this day the gym is abuzz, however, because not just Pereira, but also Teixeira is now preparing for a title bout, fresh off the announcement that Prochazka-Teixeira 2 will take place on Dec. 10 at UFC 282. Teixeira takes this turn of events — two of the eight UFC men’s championships being within reach of this small gym — as an endorsement of what he and his team have built.

“We have a champion mentality,” Teixeira says. “Only the real ones come here.”

Pereira aside, several other fighters in the gym compete in the UFC or Bellator, among them light heavyweight Dominick Reyes, who faces Ryan Spann on Saturday. “I came here to work with the coach, Fernely Feliz,” says Reyes, who has been trying to find his way out of a three-fight losing streak. “He is genuinely interested in helping me get back on track.”

When Reyes arrived from California in early August, he stayed for a week at Feliz’s house. “They treated me like family,” he says.

That vibe permeates the Teixeira gym, which is tucked next to a medical equipment store in a small strip mall off the interstate. Inside, the large caged-in mat is filled with mixed martial artists of various skill levels, from pros preparing for title fights to raw amateurs drilling basic techniques. Outside the cage, a dog owned by one of the coaches lies on a bench near a window, staring outside at the entrance to the doggy day care next door.

Brazilian music plays during shadow boxing, then hip-hop. Then the music goes silent as the pros move to one side of the cage for some serious sparring. They go hard, yet the training partners somehow manage to keep each other safe. And when the session is over, everyone sits together on the mat, listening to a few words from the coaches. Words of inspiration. Words of community.

The sense of community here extends beyond these gym walls. Hanging near the memorabilia from Teixeira’s UFC championship win are other framed symbols of what this place means to the area. There are a pair of Teixeira’s “American Dream Leadership Award” certificates, each signed by a different Connecticut senator. There’s the gym’s membership certificate from the Danbury Chamber of Commerce, where Ingrid Teixeira once worked. There’s the key to the city of Danbury, which the mayor awarded to Teixeira last year “in recognition of your UFC Championship win and in appreciation of your contributions to the city.”

Teixeira first moved to the Danbury area in 1999 to find work, arriving from Brazil with the knowledge that there were lots of his countrymen living here, including some friends and family. He met Ingrid in a gym, and after he began training in MMA, the couple moved to California, where Teixeira became a Chuck Liddell training partner under coach John Hackleman. But problems with his green card necessitated a return to Brazil, and as Teixeira’s time out of the country grew longer, his wife moved back to Connecticut. It took several years for Teixeira’s visa status to be cleared up. When he finally was free to travel back to the United States, he joined Ingrid in Connecticut, where they’ve been ever since.

“I fell in love with this area,” Teixeira says. “The nature, the changes of season. The leaves in fall, even the winter and the snow. We don’t have four seasons in Brazil. It’s priceless.”

For years during his UFC career, Teixeira would travel to California or Florida for fight camps. But in 2014, the couple opened a gym in Danbury, “and I said, ‘I’m not going to do my camp anywhere else,'” he says. “If I’m going to be a champion, I’m going to get there by training right here.”

Even after Glover and Ingrid moved the gym operation into this larger space in neighboring Bethel, Teixeira MMA & Fitness has remained a vibrant part of the local community. That is what he has brought Alex Pereira into. And Pereira appreciates what he now has.

“I love that the gym is in a small town with lots of Brazilians,” Pereira says. “I am happy that I am here.”

He pauses to turn toward the window and point outside. It’s just past peak foliage in this part of New England, but the colorful trees still paint a pretty landscape picture.

“The nature here!” Pereira says. “I like to be surrounded by this, barbecuing with friends.”

Teixeira finishes translating Pereira’s words into English, then faces his friend. A smile grows wide across his face as he grabs Pereira in a playful headlock. “You better not say anything bad about Connecticut!” Teixeira says.

Then it’s Teixeira’s turn to look around, except in his case, the gaze is contained within the gym. Fighters are scattered around, packing up gear after another day’s hard workout. Teixeira takes a deep breath. “Same time tomorrow,” he says. “If you build it, they will come.”